Moderna galerija is the first institution in Europe to start systematically collecting works by Eastern European artists and rewriting the history of postwar art. The purpose of the collection "Arteast 2000+" will display in the gallery a selection of the larger installations by some of the most globally distinguished and preeminent artists. Jasmina Cibic's latest intervention "Other Mythologies", which has been specifically formulated for UGM gallery, is a poetic reconstruction of a transitory space/waiting room/airport terminal, where the myths are expropriated and experience impossible. 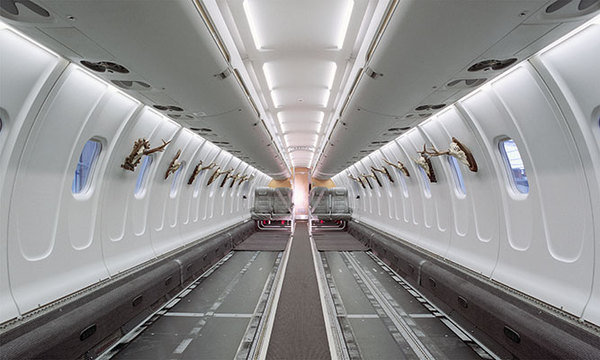 The international collection Arteast 2000+ began to take shape in the 1990s under the curatorship of Moderna galerija director Zdenka Badovinac and advisors Viktor Misiano, Piotr Piotrowski, Harald Szeemann, and Igor Zabel. Hereby Moderna galerija positioned itself as the first institution in Europe to start systematically collecting works by Eastern European artists and rewriting the history of postwar art. Fundamentally, the collection Arteast 2000+ is based on works by Eastern European neo-avant-garde artists, but it also includes a number of works by prominent Western artists which were acquired in the 1990s, while Moderna galerija was intensely forging international links; some of them were purchased at the beginning of this decade, simultaneously with the majority of the other works. The purpose of the collection Arteast 2000+ is to create a dialogue between Eastern and other spaces; its first public presentation in 2000 was thus entitled The Art of Eastern Europe in Dialogue with the West. The Maribor Art Gallery will display a selection of the larger installations by some of the most globally distinguished and preeminent artists: Marina Abramović, Joseph Beuys, Braco Dimitrijević, Jenny Holzer, Cristina Iglesias, Irwin, Sanja Iveković, Ilya and Emilia Kabakov, Katarzyna Kozyra, Laibach, Kazimir Malevich, Walter de Maria, OHO, Alenka Pirman, Mladen Stilinović, Nebojša Šerić - Šoba, Raša Todosijević.

Cibic's works posit themselves as site-specific interventions where myths are fabricated in order to disrupt the normal flow of events; space hybridisation takes place through the use of personal poetic which inserts itself directly into the existing bureaucratical apparatus, institutions and the visual field of the casual passer-by. The spectator becomes a faux tourist and the art work within its architectonical framework a souvenir object par excellence – it is namely a fetish of the Experience. The totality of the art market functions somewhat analogue to that of the tourist industry; the supply and demand in both are always new experiences, new exoticisms, where never seen places (artistic practices) take on new spectacular forms within the spectator's visual field. Cibic's work strives to reach directly into their mutual consciousness and purposefully abolish the performativity embedded within the process from the visible field in order to give way to the phantasmagori cal production of an individual territorial claim.

Cibic's latest special intervention Other Mythologies, which has been specifically formulated for UGM gallery, became a poetic reconstruction of a transitory space/waiting room/airport terminal, where the myths are expropriated and experience impossible – a space of airplane magazines, tourist brochures and advertisements where there is only one thing left to the passenger: wait for the promised destination.

UGM Maribor Art Gallery is the second biggest museum of modern art in Slovenia holding a collection of over 3000 works of art by Slovene artists from the beginning of the 20th century up to the present day. With special exhibitions UGM presents the greatest names of Slovene visual arts as well as international projects, young rising stars of contemporary art and researches current topics of the art world. Providing greater experience and asking new questions the gallery offers also architecture, design, fashion and science.