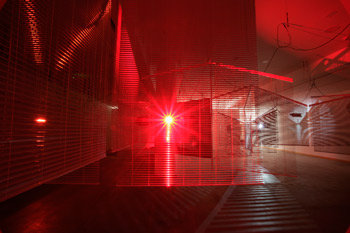 sala rekalde presents Symmetric Inequality the first solo exhibition in Spain by Berlin-based artist Haegue Yang. The work belongs to a group of installations the artist has been developing over the course of this year, focusing her interest on investigating new possibilities for parallel crossings between abstraction and narration. Together with Kunstverein (Hamburg), Cubitt (London), the Carnegie Museum of Art (Pittsburgh), Portikus (Frankfurt) and REDCAT (Los Angeles), sala rekalde now contributes to the closure of a serial project that has taken the medium of portraiture as the point of departure for its own articulation.

Symmetric Inequality continues a process of experimentation based on the artist's personal use of the portrait-like study within abstract terms, firstly to open this format to a more allegorical space for representing subjectivity, secondly to investigate the political implications embedded within hidden fragments of personal memories and, lately, as a possible platform for self-recognition.

Starting from the installation Mountains of Encounter at Kunstverein Hamburg, Haegue Yang stressed her interest in a particular series of meetings during the Japanese occupation (1910-1945) between Korean underground fighter, Kim San, and American journalist, Nym Wales, from which a dissident view of Korean history was narrated. Following this line of work, Lethal Love at Cubitt in London comprised another portrait installation, informed this time by the life and death of the peace movement activist and founder of the German Green Party, Petra Kelly, and her life partner, Gert Bastian, a former NATO general. The overlap between her public image and her private life was translated into a porous construction. In Three Kinds, presented at the 55th Carnegie International at the Carnegie Museum of Art in Pittsburgh, the artist employed a more dialectical approach than in previous installations. As a result of this, the concept of portraiture and its potential narratives were diluted into a less descriptive exercise to highlight its own abstract configuration. Her solo show entitled Sibling and Twins at Portikus in Frankfurt am Main returned to narrative as the starting point for configuring the materials used in the installation. Two pairs of historical characters; on the one hand, Kim San and Nym Wales and on the other, French writer and filmmaker Marguerite Duras and her husband, the Resistance fighter Robert Antelme, were juxtaposed in two distinct works. More recently, in Asymmetric Equality at REDCAT, Los Angeles the artist opened up a dialogue between fragments of certain biographies and her own vital experiences. The childhood of French author Marguerite Duras in Indochina reminded her own memories of youth in an under-developed society. Described as "warm melancholy" by the artist, Asymmetric Equality evoked colonial displacement, the dislocation of subjectivity and empowering melancholy through the clash between heat, wind, light and sound.

The installation Symmetric Inequality now opening at sala rekalde consists of a new configuration in which three distinctive environments are in play. As the exhibition title suggests, the installation at sala rekalde bears a close relationship with the previous installation at REDCAT. In that sense, the first zone involves a feeling of warm melancholy reminiscent of the earlier installation. References to Marguerite Duras's childhood, as for example her own vital experiences of community segregation, inspire the artist to think of these structures and groupings. The zone that follows is configured out of the combination of two colours, black and white. Two distinguishing lines of black blinds cross each other, fragmenting the space into undetermined areas of inside or outside. A pair of strong white light beams interrupts the rhythm of the long march of blinds. Six different scent emitters introduce some sensorial clues for navigating this antagonistic topography. Ideas distilled from Duras's writings about body politics and the war become residual sensory traces in this unequal space for the distribution of the senses. Finally, in the last zone the visitor encounters sensations that are more diffuse. Composed of different units of colourful blinds and mirrors, these ensembles of materials are located in one of the far corners of the exhibition space. On the opposite side, an open microphone waits to be used. This is a space that Yang proposes for temporary activation by the visitor, another way of stimulating unforeseen encounters between subjectivities.

Symmetric Inequality by Haegue Yang has been supported by Arts Council Korea.

During the same dates, The Abstract Cabinet of sala rekalde will host the curatorial project by Frederique Bergholtz and Annie Fletcher, If I Can´t Dance, I Don't Want to Be Part of Your Revolution, which investigates the evolution of performance and its diverse typologies within contemporary art.

In its first edition, in 2005, this initiative explored notions such as theatricality and production. The second edition concentrated on the feminist legacy within contemporary art. The third will tackle the concept of "masquerade" through works by artists Keren Cytter, Jon Mikel Euba, Suchan Kinoshita, Olivier Foulon, Joachim Koester and Sarah Pierce.