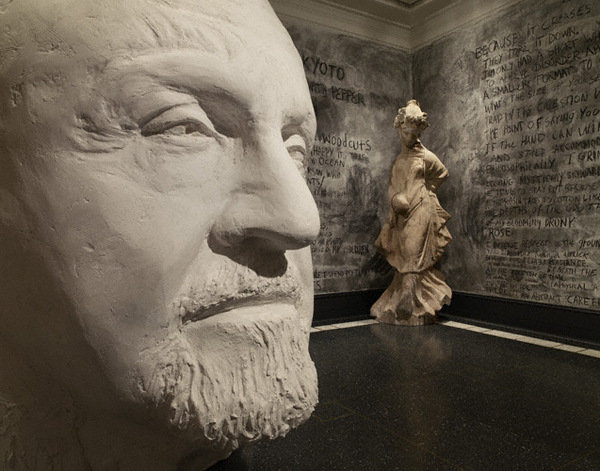 The first contemporary art project at the Getty Villa, this installation presents new sculpture and poetry by Jim Dine inspired by ancient objects in the Museum's collection.

Dine's highly personal vision finds further expression in a poem drawn on the walls, with its Orphic themes of travel, loss, and the possibilities of art.

The installation is accompanied by a 10-minute film charting Dine's creative process. Watch the documentary.

About Jim Dine
Since emerging in the early 1960s as part of the Pop Art movement, Jim Dine (born 1935) has become one of the most distinctive voices in contemporary American art. While best known for his expressive depictions of the heart symbol and commonplace modern objects such as tools and a man's bathrobe, Dine has always had a deep fascination with Greek and Roman antiquities. In media as diverse as drawing, sculpture, printmaking, and painting, he has reached across the centuries to engage classical artists, re-creating their work and making it his own.

Installation Views
The installation occupies a 27-by-21-foot space on Floor 2 of the J. Paul Getty Museum at the Getty Villa.

For all media relations and publicity questions, please contact Beth Brett by email at
communications@getty.edu or call (310)440-7360.