The Space of the Work and the Place of the Object is a group exhibition that considers the status of the art object within the context of its production. In Practice Winter '09 contains works by: Carey Ascenzo, Becket Bowes, Tyler Coburn, Wojciech Gilewicz, Samara Golden, Rachel Mason, Amy Patton, Peter Simensky. 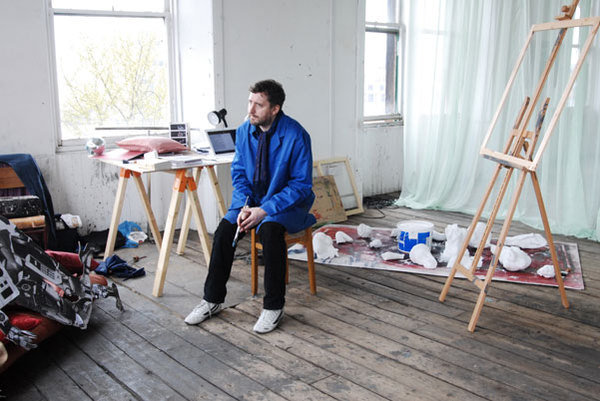 The Space of the Work and the Place of the Object

SculptureCenter is pleased to present The Space of the Work and the Place of the Object, a group exhibition that considers the status of the art object within the context of its production, on view January 11 - March 22. Participating artists include Walead Beshty, Melanie Gilligan, Gabriel Kuri, Michael Rakowitz, Blake Rayne, Karin Schneider, Simon Starling, and Carey Young. An opening reception will take place on Sunday, January 11, 4 - 6 pm. Performances of Melanie Gilligan's Prison for Objects will take place during gallery hours January 11 - 19.

The featured artists build on the ideas and critical positions of Process Art and employ methods that range from documentary to literary, but the emphasis is on a direct engagement with the materiality of the object. The artists in this exhibition all make objects that reflect the facts and fissures of their production. Each artwork is concerned with the conditions in which art and meaning are made and circulated, turning them to their own advantage, or sometimes ignoring or disrupting them. Accident presides alongside necessity as determining factors for this work, which further highlights the central concepts of systems of production, display, and distribution.

The works in this exhibition are commissioned through SculptureCenter's In Practice project series, which supports the creation and presentation of innovative work by emerging artists. The projects are selected individually and reflect the diversity of approaches to contemporary sculpture. The exhibition will be on view January 11 - March 22, 2009, with an opening reception on Sunday, January 11, 4-6 pm.

Carey Ascenzo: Care, 2008/9
Ascenzo offers a love letter with strings attached in the form of a swap. Allocating her installation budget toward a gift to the organization chosen by the staff, Ascenzo requires in exchange a form of labor that will test the staff's comfort levels. Under the artist's supervision and coordination, SculptureCenter employees, its Executive Director, and possibly a trustee, will learn a song to be performed in public (date TBA). Inverting the usual relations of power and support within a museum to produce a collaborative performance, Care addresses the permeable boundary between artwork and non-artwork, and the potent combination of vulnerability and optimism in front of an audience.

Becket Bowes: Social Isolate Club, 2008/9
Composed of a desk, a library, and a collection of objects, Becket Bowes will be inaugurating a new wing of the Social Isolate Club. The mission of the club is to define the nature of human isolation and decay through the lens of behavioral science, information theory, and a number of irresolute doctrines. The club will present a musical exploration into the meaning of the tragic death of Alan Turing, the great American computer scientist and theorist stigmatized for his sexual orientation in the 1950s; another incarnation of the Ship of Theseus; and some thoughts on logical structures. Throughout the duration of the club's inaugural exhibition, members of the Social Isolate Club can fill out the exhaustive web-based survey on human putrification at www.sicipedia.org.

Tyler Coburn: Medium No. 1 (Manhattan), 2008/9
Performance, technology, and urban poetics join together in Tyler Coburn's Medium No. 1 (Manhattan). Beginning on the first day of the year, Coburn will transmit improvisatory monologues recorded on walks across Manhattan to a thermal roll fax machine in SculptureCenter's basement. These daily transmissions will read as a continuous scroll, along a 25-foot long triangular structure, producing an eighty-two day portrait of a city through the interfaces of machine and mind.

Wojciech Gilewicz: In Practice, 2008/9
A series of oil paintings by Wojciech Gilewicz will be installed outside the SculptureCenter building. The surfaces and forms of the canvases are designed to make them appear completely invisible while they are on site. A documentation of the process of placing the works in their environment will encourage visitors to explore the periphery of the building. Using a map prepared by the artist, visitors are invited to search for the hidden paintings in the surrounding city space. Gilewicz is primarily interested in challenging visitors' perception of space, reality and their surroundings.

Samara Golden: Yes no party, 2008/9
This installation by Samara Golden is constructed out of found objects, photographs, mirrors, and live video. The piece includes a video camera that broadcasts live images to a monitor at its base. A spectator observing the sculpture is captured by the video camera, and is then able to view an altered version of himself or herself on the monitor. By using combinations of technology and traditional art processes, Golden presents the viewer with multiple ways to see and enter the work. She creates an endless circuit of transmitting and receiving between sculpture, monitor, and viewer.

Rachel Mason: Holy Empire of The Jaw, 2008/9
Holy Empire of The Jaw is a portrait gallery of important figures in Rachel Mason's life. The portraits are made out of dental molds of the individuals' teeth inset into objects that relate to their life or temperament. The inspiration for the project comes from portraits of the Habsburgs, Holy Roman Emperors in Europe from the XIIV century onwards. The Habsburg Jaw, of particular interest to Mason, is a genetic underbite and enlarged jaw that is a developed trait of this dynasty, and became a celebrated symbol of power as represented in numerous portraits. Mason has taken the Habsburgs as a theme in previous sculptures and performances. In this project, Mason creates her own royal family in the setting of an alternative Holy Empire.

Amy Patton: Hairpin Magic Wand, 2008/9
Amy Patton's project started with an ancient Egyptian hairpin, placed among objects of ambiguous origin within a vitrine at The Metropolitan Museum of Art. Combining this find with an article on Cairo from the New York Times, Patton traveled to Egypt for a residency where she is making a film. Drawing on the conception of an echo chamber, Patton's work explores nonlinearity of time, and conceptual leaps that can lead to the dematerialization of the art object.

Peter Simensky: CONSULTING MEDIUMS. Finding meaning(s) in uncertain times., 2008/9
Peter Simensky's installation places divination rods within the lower level gallery space. The forms of these rods are based on the artist's research into the use of divining mediums. Simensky will use this knowledge to trace the space of SculptureCenter's basement, searching for objects of value hidden below the floor. Simensky's piece explores how artistic gestures create potential value, and how these sets of relations might find a form of translation within objects that combine the functional, the decorative, and the symbolic.

As part of the exhibition The Space of the Work and the Place of the Object, Melanie Gilligan's Prison for Objects is an installation and performance that dramatizes our experience of commodities in the past and present. Actors perform the roles of artist and art writer, their characters playing out various contradictions and clichés of art production and reception. Performances last approximately 20 minutes and will take place throughout the day during normal gallery hours. Until January 19.

SculptureCenter is five minutes from Midtown by subway.
Directions
7 to 45th Road / Courthouse Square, E or V to 23rd / Ely, or G to Courthouse Square (note: the V train does not run on weekends). From all trains, walk north on Jackson Avenue one block past 44th Drive and turn right onto Purves Street.