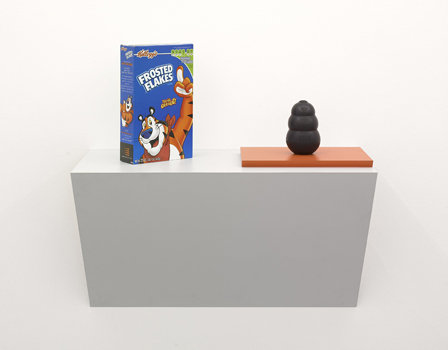 Johann König, Berlin is pleased to present recent works of Taryn Simon and Haim Steinbach. Both living in New York City, the artists draw a sharp portrait of modern American society. Since the 1970's, Haim Steinbach (*1944, Israel) has been using shelves as exhibition displays for everyday objects. He places articles of commodity next to each other according to their social or cultural significance, making emphasis on the aesthetic aspects and the sublime power of allurement of these products. This form of presentation creates a „psychological anxiety“ (Steinbach), questioning the nature of modern fetishes.

A recurrent object in Steinbach's current works is a dog toy from the brand „Kong“. According to the artist, the lump-like rubber item reminds of Brancusi's abstract sculptures. However, the tripartite form and the matte black colour of the product named „Extreme“ can also reassemble a hand grenade. On the manufacturer's website an anecdote on the development of the toy can be found, according to which the company's founder, Joe Markham, invented it out of pure coincidence while coming up with a way for his German shepherd Fritz not to chew on stones, as this ruined his teeth. At the same time, the American corporation uses the fact that the so-called K-9 teams – special police and military forces which work with drug sniffing dogs – have been instituting „Extreme“ worldwide. Love of pets, an adapted Germanness and a subliminal militarism have all been compacted into the product „Extreme“. The fictional, social or historical context of the objects, their value and erotic connotation, the sound of their name and their use and image are always relevant to Steinbach's works, writes Bruce Hainley. Steinbach's minimalistic sculptures would offer the possibility to reflect upon that which we could call „the unconscious of objects“.

Taryn Simon (*1975) also discloses a latent part of the American society. Her calm, strictly composed photographs of restricted locations reveal an unsettling side to the American Dream which elude the public eye. For her remarkable body of work she calls The American Index of the Hidden and Unfamiliar Simon has gained access to places where few others have in the realms of government, science, security, nature or medicine. For example the photograph Hymenoplasty - Cosmetic Surgery, P.A.- Fort Lauderdale, Florida (2007) depicts a gynaecological surgery. In the middle of the room, two antiquated-looking lamps stand over the examination chair where the patient spreads her legs apart as she waits for the procedure to begin. In turn, a short text explains that the portrayed woman is a Palestinian living in the USA, who is about to undergo hymen reconstructive surgery in Florida. Further we can read, that the costly 3,500 Dollar operation should prevent the 21 year old from being rejected by her future husband and family. In her work, Simon follows a calculated gradation between documenting and staging, as she makes use of the methods utilized by journalism or advertisement photography. She then complements the images by means of text explanations to exclusive any interpretative ambiguity. Her photographs, formally strict as well as meticulous, brilliantly portray USA today.

Haim Steinbach was born in 1944 in Rechovot, Israel. In 1957, he migrated to the United States with his family and became an American citizen in 1962. His first solo exhibition was presented in 1988 at The Musée d'Art Contemporain in Bordeaux. In 1992 Steinbach participated in the Documenta IX in Kassel. His work was to be seen in 1993, 1997 and 2001 at the Venice Biennial. The Solomon R. Guggenheim Museum (1993), the Castello di Rivoli in Rivoli, Italy (1995), the Museum of Modern Art Stiftung Ludwig in Vienna (1997- 98) as well as the Neuer Berliner Kunstverein (2000) have exhibited works by the artist. Steinbach lives and works in Brooklyn, New York.

The exhibition Taryn Simon/ Haim Steinbach takes place during the gallery exchange Berlin-Paris and resulted from the collaboration with the Galerie Almine Rech, Paris.