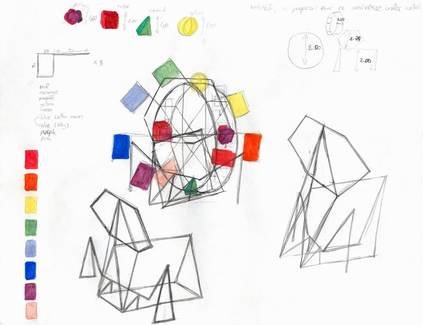 Alon Levin (New York/Den Haag) makes large-scale installations often made of wooden structures that refer to the systems of thinking we tend to take for granted. Philosophical, economical, and social theories of progress and growth, organizing principles, and ideas of modernist utopias are some of the recurring themes in his work. Levin examines the images, metaphors, and symbols that represent these concepts, and explores the contradictions and failings of their systems. The work can be seen as a narration about the buildup, breakdown, and possibly the reinvention of meaning itself.

Levin’s method and aesthetic approach: in the beginning he establishes parameters and a course of action; then a process starts in which he reacts to, examines, and eventually playfully breaks these same parameters. Alon Levin develops modules of what appear to be color and image systems that are prevalent throughout his work. Basic forms like tower, spiral, arch and wheel continuously reoccur – all bearing the connotations of technical progress, movement and monumentality. The installations’ overwhelming physical presence and the spatial quality they force onto the viewer establish a kind of logic that transforms the context and creates a momentary alternative reality. The structures have a material rawness and this underlines the transparency of the process and sketch-like nature of the installations.

In Postponed Modernism – his first solo exhibition in Germany – Alon Levin continues his ongoing series (ISCP, New York 2008 / STROOM, Den Haag 2008/ HVCCA, New York 2009) addressing Man’s adoration for – and creation of – symbols, both in the tradition of Mythology as well as in the machinery of Nationalism.

In the center of the exhibition will be a colossal 'construction' that allows associations to the 'Great Wheel' of early world fairs, a hamster wheel, or perhaps an indoctrinating baby-mobile. The mechanical construction of the installation is self-evident, though it defies any clear purpose. This highly chromatic work, "Untitled, A Proposal for a Universe Under Control" will stand beside the massive black and white wall-construction, "A Large Inverted Standard Brain on the Wall". The imposing presence of these works is not there to celebrate any truth or man’s achievement but rather confronts the viewer with the limitations of the 'box' it is in.