In 1955 and 1956, the Swiss-born American photographer traveled across the United States to photograph, as he wrote, "the kind of civilization born here and spreading elsewhere." The result of his journey was The Americans, a book that looked beneath the surface of American life to reveal a culture on the brink of massive social upheaval and one that changed the course of 20th-century photography. The exhibition will examine both Frank's process in creating the photographs and the book by presenting 150 photographs, including all of the images from The Americans, as well as 17 books, 15 manuscripts, and 28 contact sheets. 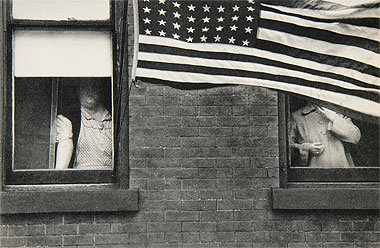 The 50th anniversary of a groundbreaking publication will be celebrated in the nation’s capital with the exhibition Looking In: Robert Frank’s "The Americans", premiering January 18 through April 26, 2009, in the National Gallery of Art’s West Building ground floor galleries. In 1955 and 1956, the Swiss-born American photographer Robert Frank (b. 1924) traveled across the United States to photograph, as he wrote, "the kind of civilization born here and spreading elsewhere." The result of his journey was The Americans, a book that looked beneath the surface of American life to reveal a culture on the brink of massive social upheaval and one that changed the course of 20th-century photography.

First published in France in 1958 and in the United States in 1959, The Americans remains the single most important book of photographs published since World War II. The exhibition will examine both Frank’s process in creating the photographs and the book by presenting 150 photographs, including all of the images from The Americans, as well as 17 books, 15 manuscripts, and 28 contact sheets. In honor of the exhibition, Frank has created a film and participated in selecting and assembling three large collages. The exhibition will travel to the San Francisco Museum of Modern Art from May 17 through August 23, 2009, and The Metropolitan Museum of Art from September 22 through December 27, 2009.

"The Americans is as powerful and provocative today as it was 50 years ago," said Earl A. Powell III, director, National Gallery of Art. "We are immensely grateful to Robert Frank and his wife, June Leaf, for their enthusiastic participation and assistance in all aspects of this exhibition and its equally ambitious catalogue. We also wish to thank Robert Frank for his donation of archival material related to The Americans, in addition to gifts of his photographs and other exhibition prints to the National Gallery of Art in 1990, 1994, and 1996, all of which formed the foundation of the project."

The exhibition has been organized by the National Gallery of Art, Washington.

Access Industries is proud to be the principal sponsor of the exhibition.

The exhibition is made possible by the generous support of the Trellis Fund. Early support for research was provided by the Marlene Nathan Meyerson Family Foundation.

During Robert Frank’s 10,000-mile journey across more than 30 states spanning nine months in 1955–1956, the young photographer took 767 rolls of film—more than 27,000 images—and made more than 1,000 work prints. He spent a year editing and selecting the photographs and constructing the sequence. When The Americans was published in 1958/1959, it revealed a country that many knew existed but few had acknowledged. Frank depicted a people often plagued by racism, ill-served by their politicians, and rendered numb by a rapidly rising culture of consumption. Yet he also found new areas of beauty in overlooked corners of the country and in the process helped redefine the icons of America. In his photographs of diners, cars, and even the road itself, Frank pioneered a seemingly intuitive, immediate, off-kilter style that was as innovative as his subjects. Also groundbreaking was the way he tightly sequenced his photographs in The Americans, linking them thematically, conceptually, formally, emotionally, and linguistically to present a haunting picture of mid-century America.

The National Gallery of Art is the copublisher with Steidl of the 50th-anniversary edition of The Americans.

Looking In: Robert Frank’s "The Americans" is the most comprehensive and in-depth exploration of Frank’s original book ever undertaken. The exhibition will be organized into four sections:

The first section will examine the roots of The Americans, not only in Frank's earlier hand-made books, including 40 Fotos (1946), Peru (1949), and Black White and Things (1952), but also in other sequences of photographs he made at this time, such as People You Don't See (1952). It will also present books by his contemporaries, such as Bill Brandt, Alexey Brodovitch, and Jakob Tuggener, whose ideas influenced the young photographer.

The second section will display Frank’s original application to the John Simon Guggenheim Memorial Foundation (which funded his primary work on the project), along with his vintage contact sheets, letters to photographer Walker Evans and author Jack Kerouac, and two manuscript versions of Kerouac’s introduction to the book. Three collages with a total of more than 115 rough work prints reveal the themes Frank wanted his book to explore—racism, politics, consumer culture, cars, families, and the way Americans lived, worked, and played—as well as his preliminary selection of images. The work prints were made in 1956 and 1957, and the collages were assembled under the artist’s supervision in 2007 and 2008.

The third section features all 83 photographs from The Americans, often in rarely exhibited vintage prints, and in the sequence that Frank established. The fourth section addresses the impact The Americans had on Frank’s subsequent career, screening a 2008 film made by the artist especially for this exhibition and presenting later still photographs.

The exhibition was organized by Sarah Greenough, senior curator of photographs at the National Gallery of Art.

The exhibition is accompanied by a major publication, produced in two different editions, and published with assistance from The Getty Foundation.

The softcover edition, Looking In: Robert Frank’s "The Americans," includes reproductions all of the works in the exhibition, along with essays by curator Sarah Greenough and Anne Wilkes Tucker, Stuart Alexander, Martin Gasser, Jeff L. Rosenheim, Michel Frizot, Luc Sante, and Philip Brookman on the evolution of Frank’s art and his relationship with photographers, editors, curators, and writers whose ideas and work helped him realize The Americans. The softcover edition comprises 396 pages with six color, 168 tritone, and 210 duotone illustrations and will be available for $45.00.

The hardcover edition, Looking In: Robert Frank’s "The Americans"—Expanded Edition includes all of the material in the softcover edition, plus reproductions of all of the contact sheets for images in The Americans, a chronology and map, an appendix titled "Making and Remaking The Americans" (which compares Frank’s preliminary sequence to the first publication of the book and subsequent editions), and an appendix of "Manuscript Materials," reproducing or transcribing correspondence and other archival documents. The hardcover edition comprises 528 pages with 108 color, 168 tritone, and 210 duotone illustrations and will be available for $75.00.