Featuring more than 120 paintings, prints, drawings, watercolors, and preparatory studies for murals, all showcasing Orozco's revolutionary artistic vision. The exhibition explores the transformations in Orozco's subjects, style, and working methods, and the charged cultural climate in which he created such a diverse body of work. The exhibition also chronicles his experiences as a cultural Ã©migrÃ© and his attempts to negotiate the complex network of art patronage in the United States. 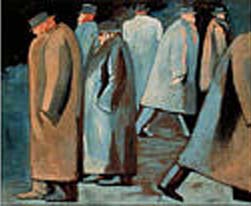 The San Diego Museum of Art announces that it is the opening venue for a comprehensive, internationally touring exhibition of works by the important Mexican artist JosÃ© Clemente Orozco, the first major exhibition in the United States of Orozco in more than forty years. Opening March 9, 2002, JosÃ© Clemente Orozco in the United States, 1927-1934 explores the extensive body of work Orozco produced during an extended stay in the United States. The exhibition is organized by the Hood Museum of Art at Dartmouth College, Hanover, New Hampshire, in collaboration with the Museo de Arte Alvar y Carmen T. Carrillo Gil, Mexico City, the two other venues on the tour's schedule. Featuring more than 120 paintings, prints, drawings, watercolors, and preparatory studies for murals, all showcasing Orozco's revolutionary artistic vision, it is the first major exhibition to focus on his time in the United States.

"The Museum is delighted to be able to present such a significant exhibition of works by Orozco who, along with Diego Rivera, Frida Khalo, and David Alfaro Siqueiros, is counted among the most important Mexican artists of the twentieth century. With San Diego's proximity to the border, this exhibition is the perfect opportunity to build upon the Mexican-American cultural exchange Orozco and his contemporaries established some seventy-five years ago," says the San Diego Museum of Art's executive director, Don Bacigalupi.

The development of this exhibition has brought together Mexican, British, and American scholars who have made a special study of twentieth-century Mexican art and of the artistic and cultural relations between the two nations. The result is a comprehensive survey of JosÃ© Clemente Orozco's work of this period, never before assembled in a single exhibition. JosÃ© Clemente Orozco in the United States, 1927-1934 explores the transformations in Orozco's subjects, style, and working methods, and the charged cultural climate in which he created such a diverse body of work. The exhibition also chronicles his experiences as a cultural Ã©migrÃ© and his attempts to negotiate the complex network of art patronage in the United States. It is curated by Renato GonzÃ¡lez Mello, professor and researcher at the Universidad Nacional AutÃ³noma de MÃ©xico and former curator at the Museo de Arte Carrillo Gil, and Diane Miliotes, research curator at the Hood Museum of Art. Beginning in 1927 Orozco spent seven years in the United States. These years coincided with unprecedented cultural exchange between Mexico and the United States. During this time, in addition to his important murals at Pomona College, Claremont, California; the New School for Social Research, New York; and Dartmouth College, Hanover, New Hampshire, Orozco created a substantial body of work in other media. Viewed as a whole, his work from this period sheds light on the artist's complex creative and political development and provides an illuminating case study on the influence of Mexican visual artists in the United States.

Orozco's contemporaries Diego Rivera and David Alfaro Siqueiros also visited the United States in these years, but their stays were brief. Traveling north from Mexico to seek new patrons for their mural commissions, these three artists all confronted an unfamiliar culture and a modernity that at once attracted and repelled them. Orozco's works, including his mural commissions in the United States, were deeply affected by these experiences. His murals brought him the international recognition that he desired, and when he returned to Mexico in 1934, he did so with a strong reputation and new mural commissions in his homeland.

The works in the exhibition show the significant impact living in the United States had on Orozco's art, resulting, first and foremost, in the production of a new and extensive body of work that covered a broader range of subjects than the artist had treated before. During this period, he continued to focus on the intellectual and social issues that had long been his central concern, but he no longer treated them exclusively in terms of Mexican subject matter. Thus visitors will see alongside his paintings and drawings of the people and landscape of his native country—e.g., Colinas Mexicanas (1930) or Desfile zapatista (1931)-representations of the modern American metropolis: its skyscrapers and bridges, its workers, and those who lost their jobs during the Great Depression.

Also on view, images such as Mannikins (1931), Aquella noche (1930), and Los muertos (1931) demonstrate the artist's awareness of and engagement with contemporary art in Europe and the United States. In addition, the exhibition includes a number of preparatory drawings for the three murals he executed in the United States, providing remarkable insight into Orozco's working method and his development of the murals from initial conception to the final product. Finally, another important aspect of Orozco's work included in the exhibition are the striking lithographs he created in the late 1920s and early 1930s, his first works in this medium.

After its presentation at the San Diego Museum of Art (March 9 to May 19, 2002), JosÃ© Clemente Orozco in the United States travels to the Hood Museum of Art, Hanover, New Hampshire (June 8 to December 15, 2002) and the Museo de Arte Carrillo Gil, Mexico City (January 25 to April 13, 2003). The exhibition itinerary allows visitors to view the exhibition in conjunction with nearby Orozco murals in southern California, New Hampshire, and Mexico City.

This exhibition is organized by the Hood Museum of Art, Dartmouth College, and supported in part by grants from the National Endowment for the Arts, the US/Mexico Fund for Culture, and the Rockefeller Foundation.