The first installation in an ongoing series looking at performance art, a new cicle that will bring performance documentation, original performance pieces, and live reenactments of historic performances to various locations throughout the Museum. This exhibition spotlights Taiwanese artist Tehching Hsieh, focusing on his earliest One Year Performance, for which he spent an entire year locked in a cage. 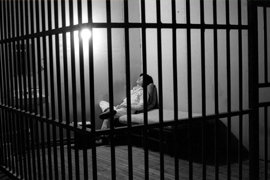 Tehching Hsieh (Taiwanese American, b. Taiwan 1950) is the focus of the first installment of MoMA’s Performance Exhibition Series, a new series that will bring performance documentation, original performance pieces, and live reenactments of historic performances to various locations throughout the Museum. Performance 1 focuses on Hsieh’s earliest performance, Cage Piece (1978-79), which involved the artist spending one year locked inside a cage constructed in his loft in New York City. The exhibition will include the original cage used in the piece and its interior (sink, bed, mirror, lamp, etc.), alongside 365 self-portraits from the performance, and 17 additional photographs. Performance 1 also features posters and materials from Hsieh’s subsequent “One Year Performances,” which took place between 1980 and 1986, and Hsieh’s final work, Thirteen Year Plan, which was completed in 1999 after a process that lasted 13 years. The exhibition is organized by Klaus Biesenbach, Chief Curator, and Jenny Schlenzka, Assistant Curator for Performance, Department of Media, The Museum of Modern Art.

The Performance Exhibition Series is made possible by the Wallis Annenberg Fund for Innovation in Contemporary Art.