Giuseppe Gabellone combines architecture, sculpture and photography and offers a fictional, mutant world in which all human beings are conspicuously absent. Processes of deconstruction and reconstruction, of transformation and displacement are central to the sculptural works of Michael Sailstorfer, who presents "No light". By expressing his own universe, in "Oasis: LucoNoctambule" Jose' Levy plays with the notions of acquaintance, privacy, strangeness or theatricality with some irony. Paintings by Kolkoz in "La Collection Americaine". 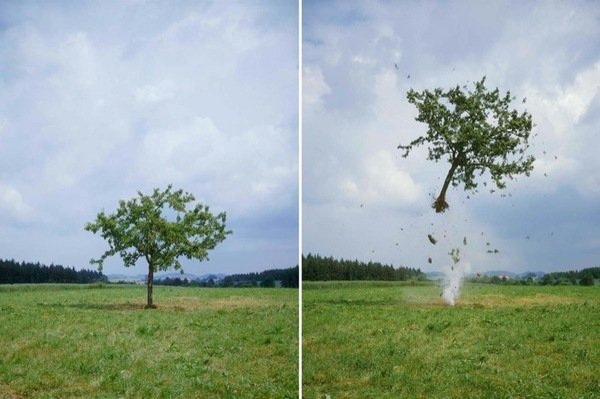 There are certain things that we continue seeing even if they no longer exist. As part of his research on architecture and memory, Giuseppe Gabellone, who was born in Brindisi, Italy, in 1973, has been creating works for the past twelve years that exist solely as a result of their exclusivity. Gabellone combines architecture, sculpture and photography and offers a fictional, mutant world in which all human beings are conspicuously absent. There may be throwbacks in his work to the baroque era or surrealism, but Gabellone truly is a maverick in terms of his highly personalized approach—an approach that leaves intact the mystery that is as familiar as it is unsettling.
Extract of the text of Ludovic Perrin

Processes of deconstruction and reconstruction, of transformation and displacement are central to the sculptural works of this young German artist. With him, a plane becomes a house, a house turns into a sofa, a police van becomes a drum kit. Both playful and narrative, absurd and poetical, sculpture according to Michael Sailstofer is an art of metamorphosis. In his recent works – "Endless Column" (2006) or "Time is no Highway – Berlin (2006)", "Musical S" (2008) –, the artist uses untangible materials such as sound, energy, smell or light: the rubbing of a tire against a wall, the vibrations of a cube of concrete in which a microphone has been placed, are a way of bringing subtle oppositions into play – visible/invisible, material/immaterial, space/time – to unveil the invisible and the transient, powerfully interacting with the viewer. Above all, these works display an attempt at venturing towards the physical and spatial possibilies of sculpture and architecture to explore their phenomenological, dynamic and synesthesic
« I’m really interested in what sculpture can be and how a sculpture can spread out and use much more space than it physically has.»
In 2008, Michael Sailstorfer has forthcoming solo exhibitions at the Schirn Kunsthalle, Frankfurt, and at P.S.1, New York.

José Lévy first started as a fashion designer. In complete breach with the codes of the time, since he favored the style of the 80s, his collections were inspired by Jacques Tati, Patrick Modiano or Jacques Demy; this unique approach catapulted him into international recognition. For 13 years, he imposed his own world onto the universe of men's fashion world with his own brand José Lévy à Paris. He established himself as an outstanding colourist and an extremely precise taylor. At the same time, he collaborated with other important brands by managing the style of Holland and Holland, Nina Ricci, Cacharel and Emanuel Ungaro. Eager to reach a larger audience, he also joined larger labels like Monoprix, La Redoute or André. Eclectic, accurate, curious and a free creator, José Lévy always illustrated his very personal style by collaborating with numerous artists since the beginning of his career: photographers and visual artists like Jack Pierson, Gotscho and Nan Goldin, Philippe Parreno, Jean-Pierre Khazem or Kolkoz; architect like Xavier Gonzales, or musicians like Jay Jay Johnson , Benjamin Biolay,…).
Since 2007, he has focused on some projects related to the visual and applied art. The Musée des Arts Décoratifs in Paris, located at 107, rue de Rivoli, has just invited him to work on the displays of the windows by exhibiting the collection of porcelain objects drawn for Deshoulières. He is preparing the costumes and furniture for the set of the play "Ordet" directed by Arthur Nauziciel, which will be presented at the upcoming Festival of Avignon. He is also working with the Manufacture de Sèvres and on several other projects as extensive as a pharmacy, bed ensembles, or dinnerware,...
By expressing his own universe, he plays with the notions of acquaintance, privacy, strangeness or theatricality with some irony. He likes to jump into memories, traces of the past, archetypes, roots of the Houses he meets in order to play and to give a respectful, distanced and free look - mixed with hybridizations, mutations, as well as subversive, squeaky and naive mating.

"There are two ways of looking at Kolkotz's 'Portrait arabes' and 'Paysages arabes' (both 2004- ongoing). Either you contemplate the slightly varying patterns, from Schwarzenegger to a complete Cubist portrait, from Picasso to an unidentified abstract shape, from Norman Bates's house in Psycho to a post Mironian composition, or you just ignore the drawing and inquisitively look at the names written down next to them instead, as if you were reading some kind of chic and conceptual tabloid." Jill Gasparina - Contemporary n 61