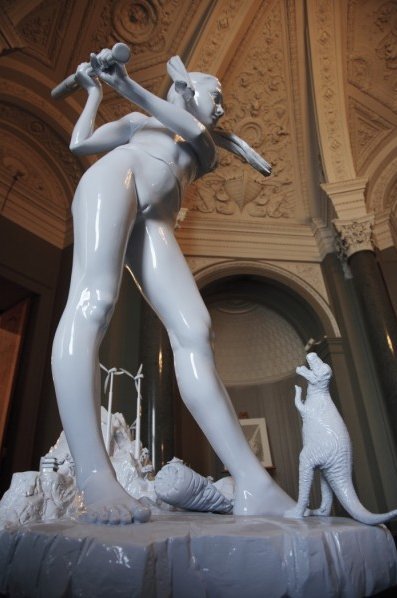 First ever solo exhibition to be held in Eastern Europe by a British artist Sam Taylor-Wood showcases her new video and photographic works, critically acclaimed ones as well as exciting world premier video art work "3 Minute Round" with the Klitschko brother participating.

A survey exhibition presents important new video and photographic works including a video installation "Sigh" based on an orchestra performance; photographic self-portraits from the "Bram Stoker's Chair III" and "Self Portrait Suspended", and also from the new "Escape Artist" series.
In a unique grouping of additional video art works - shown at the Ukrainian Pavilion at the 2007 Venice Biennale - the PinchukArtCentre will also highlight: "That White Rush," "The Last Century," and "The Servant", all visually engaging and internationally critically acclaimed. The exciting world premier video art work, "3 Minute Round" brings together the Klitschko brothers in a rare artistic film.

Peter Doroshenko, Artistic Director of the PinchukArtCentre, curator of the exhibition: "Testing our physical and emotional limits, Sam Taylor-Wood examines the vulnerability and fragility of the human body, addressing the major themes of life and death, and reflecting on our own mortality. Whilst contemporary in feel and presentation, her work references the symbolism of Dutch still life and Renaissance paintings. This exhibition consolidates Taylor-Wood as an artist whose work is magical and constantly surprising".

21 RUSSIA, an exhibition of the contemporary Russian art of the post-millennium era, presents the works of art by twenty one artists created within the last eight years. The exposition includes the pieces by the artists not only from Moscow, but also from other Russian cities: St. Petersburgh, Novosibirsk, Samara and Nizhniy Novgorod. The exhibition that involves major video projects, paintings and installations, has been consciously built around the principle of comparison or even contrast - the young artists are presented alongside with the well-known names, the new works are placed next to the "tried and true" ones that already have been to a number of international shows. A significant peculiarity that sets this project apart is a reasoned curator's vision, i.e. to present Russia's contemporary art as a complex knot of collisions: collisions of trends, generations, media and themes...

Olexander Soloviov, project curator: "A selection of the Russian artists for our exhibition covers the period from 2000. Are there any particularities that distinguish a new Russian image in a chronological sequence of the earlier periods and what components this new identity is made of? These are the questions the PinchukArtCentre exposition should give the answers to, either directly or, at times, by means of mediation".

Press-view of the projects by a British artist Sam Taylor Wood and 21 RUSSIA will take place on Friday, 16 January 2009, at 13:00 in the premises of the PinchukArtCentre. The event will include a tour of the exhibitions and a press briefing with Eckhard Schneider, General Manager of the PinchukArtCentre, Peter Doroshenko, Artistic Director, Alexandr Soloviov, Curator, and some of the artists, whose works will be exhibited in the gallery