11th edition. The four-day opening of the festival includes two main exhibitions, a two-day symposium, as well as other shows and happenings at various venues in the Helsinki metropolitan area. The event is organized by the Union of Artist Photographers in Finland - a nonprofit artist-run association with 313 member artists. Main exhibitions: "Aletheia - Positions in Contemporary Photographies", "Tense Territories", "Photographic Gallery Hippolyte". "Knowing Photography/Photographic Knowledge", the seminar January 23-24, sets out from the context of post-medium and post-analogue 21st century photography. 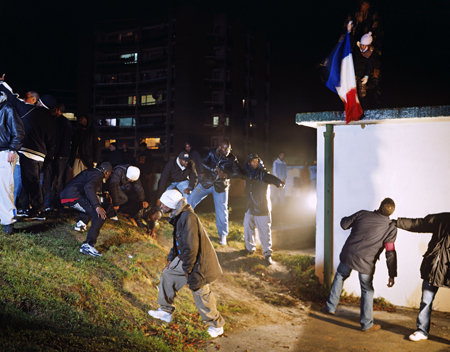 The 11th edition of the Helsinki Photography Festival opens January 21-24, 2009 in Helsinki, Finland.

The four-day opening of the festival includes two main exhibitions, a two-day symposium, as well as other exhibitions and happenings at various venues in the Helsinki metropolitan area.

Helsinki Photography Festival 2009 is organized by the Union of Artist Photographers in Finland/Photographic Gallery Hippolyte in collaboration with Helsinki City Art Museum/Meilahti Art Museum and The Finnish Museum of Photography.

Helsinki Photography Festival has its roots in the early 1980s in the Valokuvataide-Arkitaide (Photographic Art – Everyday Art) events organized in Helsinki. The engaged and spirited members of the Photographic Society in Finland gathered around the arrangements around every three to four years. The happenings were organized, in all, nine times and are the oldest photography festival in Finland.

In the early 1980s, the festivals aimed at reaching out to a broader audience, in times when photography, as an art form, still was marginally positioned. In the 1990s, the festivals were already clearly directed towards a public that was interested in questions concerning photo-based art, and the festivals focused on, for instance, Photography and Power (1993) and German Themes (1996).

Since 2000, the event has been known as Helsinki Photography Festival.That year it was named Some Parts of the World, andit was then the most comprehensive and international exhibition and event of contemporary photo-based art to have been organized in Finland. The latest edition of the festival, to be continued (2005), presented a remarkable array of contemporary photography and lens-based work from Finland and the UK, and was curated by Mika Elo and Brett Rogers.

Aletheia – Positions in Contemporary Photographies revisits and reexamines fundamental questions regarding photographic practices and the photographic medium – including the very possibility of a medium – and their roles and impact within contemporary culture.

Many concerns regarding photography were put on hold as the shift from silver-halide processes to digital technologies took place, with the then wide-spread estimation that the rules of the game had changed dramatically and that photography would no longer be able to lay any special claims regarding its relationship to the realities it would depict and represent. Yet, acknowledging that the digital shift is final, conclusive and irreversible, it is surprisingly clear that the fundamentals of photography have not always been challenged in the ways imagined at the onslaught of the digital revolution. Photographic media continue to pursue or attempt mimetic persuasion and photography's descriptive or epistemological powers, even when aimed at the imaginary, remain decisive. Not to mention that we are still seduced, alarmed, enticed and moved by photographs. Furthermore, photographic practices insist in very particular yet changing concerns regarding the nature and representation of time, space and memory.

The Finnish Museum of Photography

Tense Territories is a large exhibition, made up of four solo shows. Mohamed Bourouissa, Sini Pelkki, Carrie Schneider and Sauli Sirviö, each in their own exhibition, consider ways in which the public and the private, or the global and the local, are defined in our lives, regardless of nationality.

In Périphérique Mohamed Bourouissa examines his own background and community in the housing estates of Paris. Sini Pelkki’s set of video works Statue-Concealment-Ceremony investigates the relationship between nature and the urban living environment. Carrie Schneider’s Hang on to yourself looks at the interlocking nature of independence and our dependency relationships with other people and our environment. Sauli Sirviö’s The Great Escape is a depiction of the artist’s own life as the story of a subculture.

Each of these artists presents their own powerful, individual view of our existence, and proposes alternatives for new discourses of identity.

Founded in 1978, Photographic Gallery Hippolyte is the oldest gallery in Finland focusing on photo- and lens-based art. During the festival both photography as well as video is presented in the main gallery and the smaller studio space.

For its anniversary year, Hippolyte has invited four artists to present work in dialogue. Of these four exhibitions the work of Ulla Jokisalo and Leena Saraste is shown in March.

Photographic Gallery Hippolyte is run by the Union of Artist Photographers in Finland – a nonprofit artist-run association with 313 member artists. The Union promotes and supports photo-based art, and the professional, economic and social interests of its members. The Union also organizes festivals and other happenings, including Helsinki Photography Festival, the Triennial of Finnish Photography, as well as the annual Art Fair Suomi.