Aspect Ratio: "a psychedelic dance of graphic patterns, an infinite expanding sea of humanity, a solitary photographic particle of silver enlarged to a cinematic format, a panoramic vista of an other-worldly landscape, a series of mirrors with cinematographic image dimensions, a metres-long enlargement of a subatomic tube, an animated manipulation of Google Earth". Immortality: deals with the continuation of ideas, and how notions about ourselves and others are invariably passed on, becoming a collective body of thought and influencing our daily lives. With photographic works by Elian Somers, Antje Peters and Carla Ahlander, an installation by Bettina Pousttchi and a text piece by Iddo Drevijn. 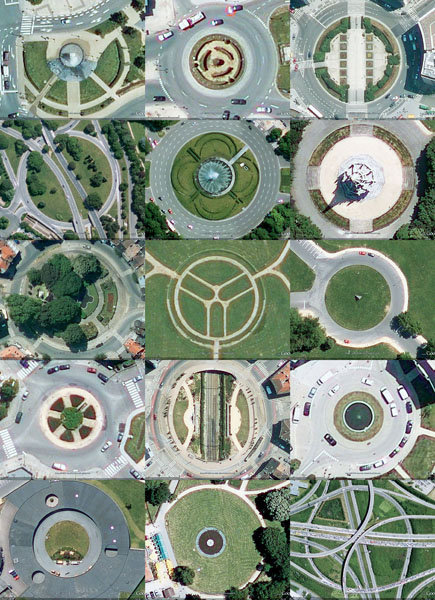 A psychedelic dance of graphic patterns, an infinite expanding sea of humanity, a solitary photographic particle of silver enlarged to a cinematic format, a panoramic vista of an other-worldly landscape, a series of mirrors with cinematographic image dimensions, a metres-long enlargement of a subatomic tube, an animated manipulation of Google Earth, a dazzling parade of thousands of colourful jpegs, a series of close-ups of the CERN particle accelerator, or indeed a profound human melodrama, reduced to the screen of an iPod: all these images belong, in any case, to the same universe that constantly invites better understanding.

The point of departure for the exhibition Aspect Ratio is The Powers of Ten (1977), the legendary, and still highly popular film by designer duo Charles and Ray Eames. In the short film, a simple photo of a picnicking couple provides the starting point for a journey through the cosmos and the tiniest molecules of the human body. Based on an original idea by the Dutch educationalist Kees Boeke (The Cosmic View, 1957), this film version also illustrates the size of things by the effect of constantly adding or subtracting a zero. Ten years ago the Eames’ film was selected for the Library of Congress because of its cultural, historical and aesthetic significance. As of old, the ‘tenfold leaps’ remain a useful educational tool for visualizing the relativity of the cosmos; us in the universe and the universe in us.

By now the technology has progressed so much further and artists are also finding new forms to explore classical notions such as dimension and relationships of scale. From nanotechnological close-ups to cosmic majesty, the exhibition Aspect Ratio examines how visual art and science enter into dialogue around the central issue: the human being as the measure in a constantly expanding technological universe.

In the 21st century the electronic screen has experienced an absolute breakthrough. From wristwatch to mp3 player, from the personal computer to every street corner, it is impossible to imagine life without viewing screens. From the huge multiplex silver screen to the display of a mobile phone, from the wide-screen home cinema to the screen built into the headrest of a seat in a train or airplane, from the monitor in a pocket game-console to the entire façade (or even ‘skin’) of a commercial building: screens are omnipresent and assume every conceivable shape and form. Screen Culture has thus become an accepted notion in the study of film, to understand the ‘journey’ from the film image to today’s multifarious uses. An important side effect of this is the loss of the incorruptible image format, and the neglect of the fixed ‘aspect ratio’, the attention for the specific proportions inherent to every cinematographic image.

There are two pressing questions: How ‘elastic’ has the notion ‘screen’ become? And how ‘elastic’ is the human capacity for comprehension? The huge explosion of formats and technological innovations, each characterized by a game involving scale and dimensions has an ambiguous effect. On the one hand a range of inspiring possibilities are created, and on the other many confusing side effects resulting from this rapid development.

Great revolutions sometimes have small causes. The miniaturization that results from ever-smaller microprocessors has an impact on numerous fronts. Not just the screens, the cameras are also constantly shrinking in size. The unwieldy 35mm camera was suddenly facing competition from registration techniques that are barely the size of a ballpoint pen. In science the photographic camera ‘as a window on the world’ has long been superseded and replaced by other methods of visualization. Thus nanotechnological images are created by means of electron or atomic microscopes, and a source of light is certainly no longer necessary to make something visible. The high technology camera is an active agent that ‘encodes’ a visual representation for us instead of making an analogue reproduction of it. The human eye has long since ceased to be the reference with which to observe the world. Our powers of imagination are continually being surpassed by scientific images of the imperceptible.

The ‘shrinking’ and resulting omnipresence of technology has an effect on the way in which we function in the world, as well as how we see ourselves, how we position ourselves in that larger, increasingly complex whole. The cinema brought us the ‘close up’, which fantastically enriched our cultural idiom: the photographic detail, tremendously vivid and hugely enlarged on the big screen. But the technology is by now so advanced that we are no longer surprised at seeing unborn life that can be tracked in 3D, or a piece of DNA that is puzzled together in front of our eyes. What do artists/filmmakers do with the idea of physical intimacy, now that the ultimate border has been reached? Can artists still measure up at all to the impact of scientific iconography? But how ‘realistic’ are scientific images? Which formal conventions do they involve? And how can audiovisual artists manipulate them in a meaningful way?

Only rarely are we offered a fundamentally new viewing experience. Since ancient times we have been gazing at the limits of the universe, but only since the first astronauts do we have a photographic image of our own planet, and we are able to locate ourselves. Satellite technology has by now led to GPS and Google Earth, which is intended to enable us to orientate ourselves with every spot on the planet at any time, while simultaneously looking down upon ourselves as a god. Useful, but also sometimes disquieting. What effect does Google Earth have on our worldview, our consciousness and the visual culture? What meaning do geographical borders still hold? Who is already monitoring the all-seeing eye? Where are the supercomputers located that make all this possible? Will we soon tire of watching our selfsame world?

Behind all this lies the exponentially increasing capacity of computer memory and all kinds of processors, which effect the greatest possible acceleration on the smallest possible scale. So how long will the human being remain the measure of all things?
Edwin Carels, December 2oo8

Immortality
Sustaining the Present, the Past, the Future

The exhibition Immortality is curated by Fatos Üstek (198o, Ankara, lives and works in London). She is TENT. Young Curator from January through March 2oo9. Immortality deals with the continuation of ideas, and how notions about ourselves and others are invariably passed on, becoming a collective body of thought and influencing our daily lives. With photographic works by Elian Somers (Rotterdam), Antje Peters (Rotterdam) and Carla Ahlander (Berlin), an installation by Bettina Pousttchi (Berlin) and a text piece by Iddo Drevijn (Rotterdam).

Carla Ahlander shows a photo series depicting waiting rooms in the registration offices in Berlin. Initially the rooms present themselves as neutral, the power is discreet. There are no people in the waiting rooms, only the possibility of their presence. In addition to the photo series she is showing new work.

Iddo Drevijn graduated from the Willem de Kooning Academie in the summer of 2oo8 with a text piece and a series of performances. His wall text Your Mind is My Revolution is essentially an optimistic piece. We don’t know the subject, but it sets itself up as the protagonist of a change, and claims the imaginary public in order to spark a revolution.

Bettina Pousttchi works with installations, video and photography. In the exhibition she is showing Blackout, a sculpture made of crowd barriers. The twisted steel standards could well be the result of a demonstration, but also have an elegance that puts their regulating function into perspective. The video piece Line (2oo5) is a registration of a protest march.

Urban utopias such as Brasilia and the Cité Modelé in Brussels are the subjects of recent photo series by Elian Somers. She is interested in the way in which the idea of progress that lay behind the construction of these residential areas becomes visible in photography. In her recent project on the city Kaliningrad, she examines the traces of the various ideologies that defined the history of the city.

Antje Peters made the photo series Collection for a publication on the house style of the Dutch ministries by Studio Dumbar. The photos show office material and promotional gifts with the logos of the various ministries. In 2oo8 the State decided to adopt a single logo (designed by Studio Dumbar) and these identity bearers became redundant.

Fatos Üstek graduated in the summer of 2oo8 as Master of Contemporary Art Theory from the Goldsmiths University in London. Among other things, she organized the travelling video festival Here..There..Abroad and the project The Lost Moment, which involved an exhibition, lectures and a publication. She writes frequently about art and film and she is co-editor and founder of the online magazine on contemporary art Nowiswere. The TENT.Young Curator Programme offers young curators the opportunity to get acquainted with the Rotterdam art world.