In the group exhibition, two paradigmatic positions from the 1970s are be set within the context of contemporary art which explicitly or implicitly hark back to this era. On show works by Lawrence Weiner, Ryan Gander, Nobuyoshi Araki, John Stezaker, Ceal Floyer... 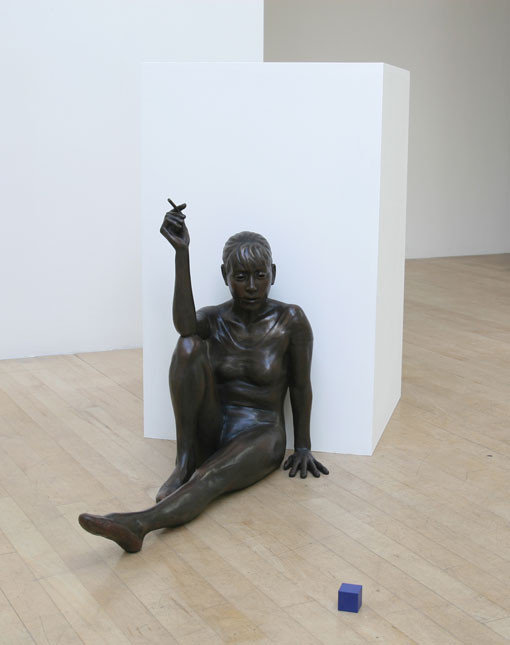 In the group exhibition “Desire Acquire”, two paradigmatic positions from the 1970s will be set within the context of contemporary art which explicitly or implicitly hark back to this era. On show will be works by Lawrence Weiner (1942) who, as one of the major representatives of Concept Art, bursts the conventional definition of the term. The use of language as medium, the deployment of typography and graphic elements correspond to an iconoclastic gesture that replaces the picture. In a radicalization of this gesture, Weiner is indifferent to whether the work’s conception is carried out by himself or someone else or simply remains a mere idea. Jonathan Monk (1969), whose artistic strategy consists of recontextualizing artworks from this period, is represented by a work specifically created for our exhibition. Different film and exhibition posters from the 1970s (Sol LeWitt, Dan Flavin, among others) are conceived as a mural work to be destroyed after the exhibition and only preserved as an idea or a documentation. The idea or documented work can be acquired and again exhibited and in this form find access to a new documentation, which in turn can be re-exhibited and re-documented in the metaphor of an infinite loop. In a similar way, critically and ironically, Ceal Floyer (1968) acknowledges the legacy of Concept Art. Thus the doublethink of the language is a starting point for the semantic inversion of words and their potential for triggering expectations. Her photo work “Reversed” shows the sign “reserved” in mirror writing. Looking at the photograph, we immediately assume that the artist might have simply placed the “reserved” sign back to front. Nevertheless, her action consisted solely in a reversal of the writing, thus playfully making visible the complex process of understanding verbal meaning.

Ryan Gander (1976) has devoted himself to expanding the definition of Concept Art, namely as “a conceptual art that extracts a core sample from the vast inventory of worldly experience, holding it up to the new light”. Although his works evoke only a minimum of aesthetics, they testify to an often narrative treatment of existing artistic positions. Thus the conventional definition of sculpture is deconstructed via a Degas-like ballerina who is not presented on a pedestal but seated on the floor leaning against one. This is therefore not only a Concept Art analysis of the conditions under which art takes place. The ballerina is also gazing at a small cube placed in front of her, namely at the prototypical form of Minimal Art and its formal severity. In the same way, Ayşe Erkmen (1949) draws parallels to the principles of Minimal Art with her sculptural group “Imitating Lines”. She has developed a module that stands on a square base from which a steel tube rises vertically. From this module, she derived different variations by adding other colored tubes that imitate the forms of objects (steps, pedestal, pillar).

These objects are reduced to their geometric primary structures and, via their sculptural form, set into a new relationship with surrounding space. The experimental and self-reflective treatment of various media - as was so characteristic for the art of the 1970s - is also found in the photography of the period. Thus Nobuyoshi Araki (1940) questioned the authenticity of the photographic image by photographing everyday performances on the TV screen, then tearing the photographs in two before putting them back together again to make a “whole” picture. In just the same way, using various chemicals, he manipulated the negatives in the photo lab, thus not only performing a negation of the pictured object, but also subjecting the medium’s requirements to a critical test. In a similar way, in a series of “Self-Portraits of You + Me”, Douglas Gordon (1966) undertakes a manipulation of the image by cutting out the eyes and mouth of found photographs of Hollywood stars or trying out other forms of “mutilation”. According to his own words, he thus achieves “contemporary iconoclasm”, whose starting point is the crude ambivalence of the star cult as well as the suggestiveness of the image.

John Stezaker (1949) has, in the same way, appropriated picture material since the 1970s. No new photographs should be added to the existing picture cosmos; instead the existing ones are to be unfamiliarized in a kind of collaged process, so as to call a halt to the impassive consumption of images. Starting with actors’ portraits, female-photo cutouts are inserted into male likenesses (or vice versa). In this way, hybrid constellations result that deconstruct the glamour and the intactness of the original portraits. At the same time, they point to the “universal blindness” and the ensuing amnesia of memory that trigger the excessive flood of images. Nevertheless, both John Stezaker, as well as Douglas Gordon, acknowledge the fact that not every found picture can be manipulated or “violated” in the same way. Subsequently, some pictures - independent of the inflationary flood of images brought on by the media - are given a bewitching appeal that already in the early history of art led to what became known as iconoclasm.
Birgid Uccia

Image: Ryan Gander: I don't blame you, or, When we made love you used to cry and I love you like the stars above and I'll love you 'til I die, 2008