In the solo exhibition entitled "Nostalgia of Tribal Borneo", the malaysian artist displays nine portraits, which should carry away the viewer into another world and culture. 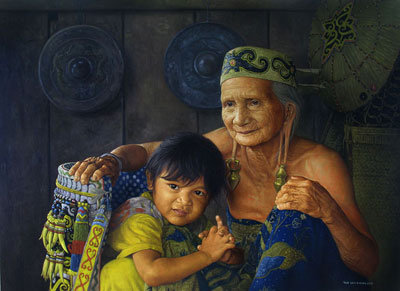 The Gallery Avanthay Contemporary, Zurich is pleased to present for the first Opening of 2009 the new artist discovery Tan Wei Kheng (*1970 Marudi, Sarawak) from Malaysia. In the exhibition entitled “Nostalgia of Tribal Borneo” nine portraits will be shown, which should carry away the viewer into another world and culture. “I travel into the dense interior and spend time time with the people of the interior known as the Orang Ulu. I study and photograph them and paint people from the Kayan, Kenyah, Penan, Kelabit und Iban communities.” (Tan Wei Kheng, Sarawak Kaleidoscope, 2002)

The artist Tan Wei Kheng is specialized in portraits from the indigenous communities living in the interior of Sarawak. Sarawak is situated along the northeast coast of the island Borneo and is beside Sabah, the second state which belongs to Malaysia. The large expanse of rainforest in Sarawak’s interior is crisscrossed by many winding rivers, which are often the only way to the places where the natural tribes are living. The artist had his first contact with the natural tribes from the interior in his early childhood when he lived in Marudi, which was visited by them from time to time. He developed his fascination for these people, because they were so completely different in the way they looked. Some of them were tattooed on arms, hands and feet or had elongated ear lobes sometimes stretched down to the shoulders or had completely shaved eye-browns. He started very early to make his first drawings and drafts of them. Since that time, he has traveled into the deep of the dense interior to photograph the people in their natural surrounding and to make portraits of them.

It is Tan Wei Kheng’s destiny to draw attention to the beauty and specialty of the people of his country. For him there exists only one medium to do it: the portrait. As self taught artist without any formal training- Tan Wei Kheng studied art only by reading art books-he achieved a level of artistry, comparable with the technique of the old masters that filled people with awe. It is not only the perfectionism of his old master technique connected with the high realistic effect of his paintings which affects the viewer. It is furthermore the expression of the portrayed people which touch us. Tan Wei Kheng is able to catch the character and the soul of the people in his paintings and to bring them to life. A collector of his works said: “You want to walk towards the painting and touch the people, they seem so real"

The lively character of the people is underlined by the artist, also with the selection of the moment of his motives. The painting “Kenyah Grandmother’ s Love 2 “shows the portrait of an old grandmother with her young child from the Kenyah tribe. They are sitting next to each other on the floor. The grandmother has her right arm around the child while she is holding at the same time the baby carrier, also called Ba’, decorated with beads, coins and teeth, in which the child is sitting. The child leans forward putting its chin on the knee of the grandmother and the little hands connecting like a prayer. It is a sign of security and love of the child who is feeling comfortable and protected by the grandmother. The grandmother seems to enjoy the situation as well, her view is engrossed and on her lips she is showing a content smile.

Although the artist Tan Wei Kheng is portraying the natural tribes of Sarawak, which seem to be quite different in nature and far away from our modern civilized Western world, they stand more next to us than expected. The naturalness of the people, the idyll of the depicted scenes and the mostly sublime expression of the portrayed people, evokes hidden and unfilled dreams in the viewer and allow him recognize that basically all people are the same.