This show brings together six young artists living in Switzerland who work in quite different ways on the problematics of the monumental and anti-monumental, as well as on the fragility of the artistic medium itself. 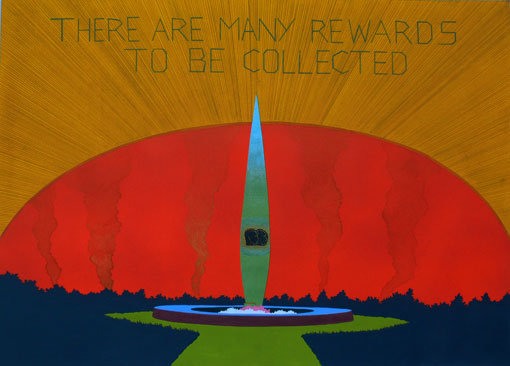 “Fragile Monuments” brings together six young artists living in Switzerland who work in quite different ways on the problematics of the monumental and anti-monumental, as well as on the fragility of the artistic medium itself. The term “monument” is used in its literal, as well as in its figurative, sense. The issue here is about the deconstruction and reconstruction of narrations, about an expanded concept of sculpture, and about the ephemeral and non-monumental as an artistic strategy. Stefan Burger!s (*1977) film installation “Analogue Monument” exemplifies the exhibition!s title in several ways: the 16-mm film shows the demolition of the Agfa factory in Munich. The antiquarian film projector—equipped with a rotating promotional umbrella from the Ilford company—is an analogue memorial to the fragile and under-threat-of-extinction medium of film and becomes, at the same time, a kinetic sculpture. Davide Cascio (*1976), in his collages and installations, is engaged with modernist utopias and their possible transformation.

His fantastic architectural and urban scenarios operate like formal, mental orchestrations that, inspired by the theories of Yona Friedman, follow the logic of the unplannable, the anti-monumental and the anti-ideological. Aurélien Gamboni (*1979), in his recent body of work, refers among other things to the concluding scene in the cult movie “The Usual Suspects” in which a shattering coffee cup (that the artist has reproduced as a sculpture) is made a symbol of the breakup of a whole narrative construct. In his combined drawings, Gamboni blends fragments of cultural-historical events, figures and narrations to ever-new intellectual systems of reference. Basim Magdy (*1977), in his drawings, collages and installations, wittily parodies the absurdity of the ideologies and paranoia depicted in the mass media. “What goes up must come down” shows a monument erected at the spot where the Russian cosmonaut Yuri Gagarin, the first man to explore outer space and all its possibilities, was killed in a plane crash while being trained as a fighter pilot. Kilian Rüthemann (*1979) undertakes mostly direct interventions in inside and outside spaces and works with "non-art! materials, while alluding to Minimal, Land or Process Art. The computer-generated collage on view represents a virtual intervention in a landscape, which can be read, like the actual (de)constructivist interposition in the gallery!s parquet flooring, as a precise placement, which calls in question both the site and the sculptural concept.

Hagar Schmidhalter (*1968) recycles images out of books and magazines, fragmentizes or paints over them, and works subtly with blank spaces or different surface treatments. The wall object shown here is made up of pleated and glued together magazine pages, painted in several coats of black acrylic and enamel paint. Both referring to monochrome painting as well as to minimalist sculpture, it captivates precisely through this ambiguity and its material fragility.
Eva Scharrer