A Space for an Island Universe. The exhibition consists of an installation on display at the Palacio de Cristal in Madrid's El Retiro Park and a film shown on the fourth floor of the museum. The installation is made up of five sculptural elements of chrome-plated aluminium and blown glass which correspond to five different universes: small-scale violence, frozen structure, heliocentric explosion, directional structure and late emergence. Curated by Lynne Cooke. 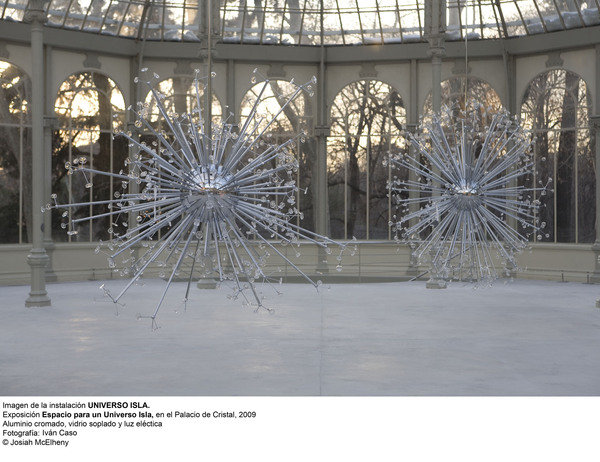 The exhibition dedicated to Josiah McElheny (Boston, Massachusetts, 1966) consists of an installation that will be on display at the Palacio de Cristal in Madrid’s El Retiro Park and a film that will be shown on the fourth floor of the museum. The installation is made up of five sculptural elements of chrome-plated aluminium and blown glass which correspond to five different universes: small-scale violence, frozen structure, heliocentric explosion, directional structure and late emergence.

Each of them consists of a central sphere from which radiate rods of varying lengths; each rod ends with either a single light or clustered or solitary glass discs and globes. The installation was inspired by the chandeliers of the Metropolitan Opera House (New York), designed by Lobmeyr in 1965 – the same year that the first data supporting the Big Bang theory of the universe’s origin first appeared. To develop the concept for this piece, which is a model of that theory and of the currently accepted conventions regarding the same, McElheny collaborated with the scientist David Weinberg. Through the installation, the artist continues to explore what has been his primary field of interest in recent years – namely, questioning the legacy of modernity from places where design, science and the history of art and culture come together, places that are especially productive and ambiguous. This is the first time this work will be shown after its exhibition at the White Cube Gallery in London.

According to the exhibition curator, two lines of thought can therefore be detected in this work. On the one hand, she sees a reference to the history of design and decorative art, evident in the inspiration taken from the Metropolitan Opera House chandeliers; and on the other, there is a cosmological vision that references the cosmos, astronomy and the universe.

Similarly, the catalogue texts also include reprints of texts by philosopher Immanuel Kant. Lynne Cooke explains it in this manner: “In 1755, Kant wrote a book entitled Universal Natural History and Theory of the Heavens, in which he speculated about how the universe was created. Its most important contribution was to elucidate that the universe did not have just one centre and that it was not created in just one moment. It appeared rather like an archipelago where many islands coexisted, each one emerging as a universe that existed simultaneously and did not depend on any other islands. McElheny has taken Kant’s notion of the island universe and applied it to a social model in which different individuals exist, a model where they are equal yet different, where there are no hierarchies… The central idea of the work is that we are not isolated, that we do not all come from the same place; we have different needs, different histories and different thought systems.” “When one approaches and observes the installation, he always finds himself at its centre because he sees himself reflected in it. Therefore, the sculpture refers to the cosmos, to history, to the universe, and it addresses a metaphysical question about how each individual relates to the world.”

Island Universe combines a lovely and imposing materiality with a great wealth of cultural, historical and formal associations. In this work, the artist continues to explore what has been his primary field of interest in recent years – namely, questioning the legacy of modernity from places where design, science and the history of art and culture come together, places that are especially productive and ambiguous. To this end, he has made use of his training as an artist and as a master glazier, but he has also drawn from his interest in science and the works of writers such as Borges who create very believable parallel realities.

On the 4th floor of the Museo Reina Sofía, the installation is accompanied by the film Island Universe (2005-2008), recorded at the Metropolitan Opera House in New York. “The film,” comments exhibition curator Lynne Cooke, “was created at the same time as the installation now being shown at the Palacio de Cristal. Josiah McElheny went to the Metropolitan Opera House with camera equipment and, after many hours of filming, edited the material. The result of all of this work, which was done in three different periods, is this film that shows the motion of the chandeliers as they are lowered and raised in the opera house auditorium. While the installation at the Palacio de Cristal is based on the idea of space, the film shows the passage of time. Space and time flow together and complement each other, for it is impossible to envision one without the other. As a result, the film allows us to discover the two springboards of Josiah’s work – on the one hand, the chandeliers, and on the other, the idea of the creation of the universe.”

McElheny’s work has been shown in numerous spaces and museums, including The Art Institute of Chicago (1998), the Whitney Museum Biennial (2000), the Centro Galego de Arte Contemporáneo (2002) and the MoMA (2007). He was also the winner of the 1995 Biennial Competition of the Louis Comfort Tiffany Foundation.

Catalogue: A catalogue has been published to accompany this exhibition. In addition to reproducing images of the installation at the Palacio de Cristal, the catalogue includes original texts by Lynne Cook, Eric de Bruyn, Craig Hogan, Molly Nesbit and Thomas Ryckman. It also contains reprints of texts by the philosopher Immanuel Kant and physicist Andrei Linde as well as two transcriptions of conversations with the artist: one with scientist David Weinberg and the other with the composer of the film’s musical score, Paul Schütze.