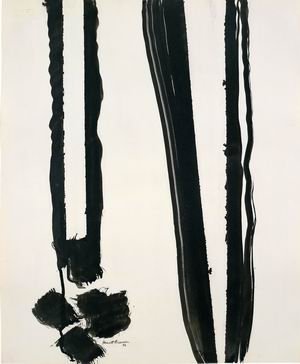 “Minimalisms” is a term that might define the New York collection of work on paper, from which the Museo de Arte Contemporáneo Esteban Vicente has made a carefully chosen selection for exhibition.

This is the Kramarsky Collection, without question one of the most prestigious and active in the US contemporary art scene. Concentrating on the drawing as autonomous artistic language, it contains around three thousand works produced between the mid-twentieth century and the present day. Although famous for its specialization in US minimalism of the 1960s, it also includes abstract works, which by their nature and objective look towards minimalism, and others representing the heritage of that movement up to today.

The exhibition is a faithful representation of the broad characteristics of the Collection, and follows the course of various minimalist poetics, showing what these owe to abstract expressionism, traces of pop art, contacts with science and literature, and their connections with Earthworks, conceptual and performance art. The genealogy of the most influential art since the mid-twentieth century is traced through one hundred and sixteen works by seventy-one artists belonging to successive generations. These range from legendary names such as Esteban Vicente, Barnett Newman or Ellsworth Kelly who, at the end of the 1950s, began to move away from abstract expressionism with a systematic reductionism in their work, through a core (more widely represented in the show) consisting of artists reaching maturity in the sixties and seventies, including both the first interpreters of minimalism and those who plotted the varied courses of postminimalism, as well as those of later generations who have followed similar artistic impulses.

The arrangement of the works in the exhibition mainly attempts to explore these connections, not according to chronology or stylistic allegiances, but rather to the conceptual poetics developing from the formal relations that emerge from the drawings themselves. The introspective exploration of abstract space by means of gesture links works by artists as different as Barnett Newman, Esteban Vicente, Jasper Johns, Cy Twombly, Terry Winters, Brice Marden or Mark di Suvero. Attention to material/form upon abstract fields is to be found in the works of Agnes Martin, Frank Stella, Sol LeWitt, Richard Serra, or more recent artists such as Mary McDonnell and Karen Schiff.

A reliance on chance was the hallmark of many of the artists working from the sixties onwards. These regarded the creative process itself as more important than the finished work. Pure chance, bringing seriously into question the role of the artist as author, is present in the works of William Anastasi, a pioneer of the process art of the sixties, and in those of John Cage, who practised the “absence of intention”, drawing with smoke or consulting the I Ching. Chance aided by the artist appears in the drawing the dancer Trisha Brown made with her feet.

Repetition and series are other resources associated with minimalist poetics, and can be found in the work of Carl Andre or Christopher Wilmarth. A fascination with both natural and artificial systems runs through many of the works on show. There are regulated systems, whether self-imposed or self-designed, such as can be seen in the drawings of Sol LeWitt, Suzanne Bocanegra, Edda Renouf or Jill O’Bryan. We find the incorporation of language as a system of signs in the work of Elena del Rivero, Joseph Zito or Robert Barry, and structural systems in that of Donald Judd, Joan Witek, Lawrence Weiner, Annabel Daou and Fred Sandback. There are systems related to science, engineering or the environment which are prominent in Alyson Shotz’s photography and in the Earthworks art of Nancy Holt and Robert Smithson, several of whose project drafts are in the exhibition, including a study for his famous Spiral Jetty.

Such dialogues link together the works of this exhibition, forming a network which reveals the avant-garde impulse flowing through this broad creative environment.

Contemporary drawing has been used as an instrument for exploration and as a documentary mechanism, but above all, for the artists in this exhibition it has been an end in itself, with full artistic identity. If, as Richard Serra maintained, drawing is another type of language, then in this context, where the idea is all-important, is where its role in the creative process is most marked. Work on paper, particularly drawing, is the most eloquent means of penetrating this process in order to express and synthesize in the most direct manner the complex nature of concepts. This interest in what happens upon paper is what set Wynn Kramarsky on his course as a collector. It is the guiding thread through the inter-generational discourse shown in this exhibition. Paper, in these works, becomes a territory where shared sensibilities are revealed, and where visual and conceptual interconnections or aesthetic divergences are expressed in the diverse languages of the art of our time.

In cooperation with:
The Fifth Floor Foundation