Art and the Search for Origins. The exhibition explores the significance of the popularization of Charles Darwin's ideas for visual artists active from 1859 to the mid-20th century. With some 150 paintings, drawings, and lithographs, as well as rare documentary material, the show focuses on artists as diverse as Frederic Church, Martin Johnson Heade, Frantisek Kupka, Odilon Redon, George Frederic Watts, Arnold Bocklin, Gabriel von Max, Alfred Kubin, and Max Ernst. Curated by Pamela Kort. 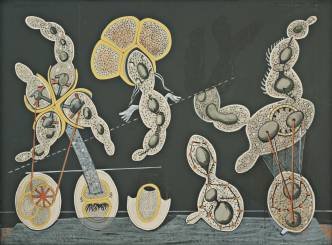 On the occasion of the 200th anniversary of the birth of Charles Darwin in 1809 and the 150th anniversary of the publication of his seminal work "On the Origin of Species" (1859), the Schirn Kunsthalle Frankfurt will present the exhibition "Darwin. Art and the Search for Origins". Darwin's epochal book and the ensuing heated discussion around origins not only exploded the boundaries of the biological sciences, but also caught and held the attention of a broad public spectrum. This exhibition is the first to explore the significance of the popularization of Charles Darwin's ideas for visual artists active from 1859 to the mid-twentieth century. With some 150 paintings, drawings, and lithographs, as well as rare documentary material, the exhibition focuses on artists as diverse as Frederic Church, Martin Johnson Heade, František Kupka, Odilon Redon, George Frederic Watts, Arnold Böcklin, Gabriel von Max, Alfred Kubin, and Max Ernst. All of them were fascinated by natural sciences to differing degrees either reading texts by Darwin or those who reacted to him.

Not only Darwin's ideas, but those of a whole host of these advocates and detractors soon caught and held visual artists' attention. In Germany, Arnold Böcklin came into contact with the theories of Darwin no later than 1872. In several subsequent paintings, Böcklin joined mythological and Christian motifs with more radical evolutionary ideas and pictorial schemes being advanced by natural scientists at the time. Later in 1880, Böcklin spent a week with Anton Dohrn, the head of the Zoological Station in Naples, who saw his task as corroborating Darwin's theories through empirical findings. Thereafter, the artist made several sea paintings dominated by mermaids and other ocean creatures with features and expressions reminiscent of humans.

Convinced that all life was once hermaphroditic and born out of the depths of the ocean, Alfred Kubin presented an almost morbid picture of evolution in his early bizarre hybrid creatures. Kubin's early drawings reveal his obsession with almost every aspect of Darwinism. The sometimes sinister and always strange transmutational species that inhabit them subtly mock scientists' progressive optimism and rationalism. With them he underscored the grimmer implications of Darwin's ideas.

Works by artists active in France such as František Kupka and Odilon Redon reveal that there the spread of Darwinism was linked not just to the idea of life having evolved out of the swamps and seas but also to a growing concern with "L'homme primitif."

In the USA, responses to Darwin's teachings were somewhat more reserved. Despite their knowledge of Darwin's theories, some painters remained convinced creationists, Frederic Church chief amongst them. In contrast, Darwin's vision of nature as an "entangled bank" inspired Martin Johnson Heade to paint South American views of nature, in which the struggle for survival is everywhere subtly hinted at. In England, although Darwin was hotly debated, few artists seemed willing to risk a side-taking. George Frederic Watts was a notable exception: in his paintings he proposed evolutionary processes as the spiritualization of matter.

Almost a quarter of a century later, Max Ernst began to assemble a body of work largely inspired by images in nineteenth-century popular science books. He was fascinated not only by paleontology – the scientific study of the geologic past – but increasingly also by astronomy and meteorology. In many of his paintings and collages, he advanced his own version of the evolution of life, creating new scenes of "deep time." In these works he not only questioned mankind's origins but also the future of life on earth. Those made between 1920 and 1933 advance a positive take on evolutionary processes. Thereafter, just prior to and during World War II, his paintings increasingly put forth the possibility of mankind's impending extinction. Ultimately, this exhibition solicits a reconsideration of a question that Darwin essentially left unresolved: is evolution necessarily progressive; can man survive? Such a query is perhaps the most urgent issue of the twenty-first century.