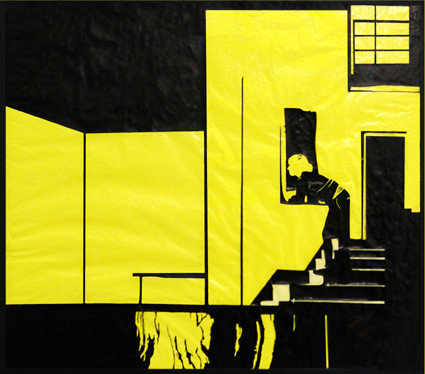 When you love music, you want everything related to it, closely or not, to be beautiful too.
Benoît Hennebert, December 1984.

The Belgian record label Les Disques du Crépuscule has created one of the most influencing yet in a systematic way hardly developed cultural phenomenon in-between pop and High Art.
Starting in the 1980s in the course of the emerging New Wave, the record label formed its identity on the basis of current music, covertexts and a nonpareil visual appearance. Based on the interplay of ideas from early Modernism, old commercial graphics and a comic style named „Ligne Claire“, head designer Benoit Hennebert and his colleagues developed a flittering style. An enticingly sophisticated as well as complex parallel world originated, in the centre of which Les Disques du Crépuscule acted as show object and as a means of identification. The label presented itself as a coffeetable-book, where one could every now and then cut his fingers when turning the pages.
However, the label's œuvre achieved only in Japan a musical impact that reached beyond limited art scenes. While artists such as Lawrence Weiner, Linder or Denyse Willem worked for Les Disques du Crépuscule, there was no close link to the gallery scene of Brussels in the 1980s. Merely for the last years artists like Enrico David, Christian Flamm, Julia Horstmann, Lucy McKenzie, Claus Richter, Hanna Schwarz or Detlef Weinrich have referred directly to the label, its music and graphics.
Therefore, it is all the more important to look into this enthralling, instantaneous but often clandestine effective history. The exhibition consists of two parts: The exhibition hall shows historic works of Linder, Lawrence Weiner, Benoit Hennebert et al., resulting from the active time of the label, and shows exhibits of young international artists, who deal with the label from a modern perspective. The seminar room on the third floor of the building shows historic documents, archive materials, drafts, records and poster that mirror the method of operation and the environment of Crépuscule. This part of the exhibition will be open to the public over a period of about five months, and will give an opportunity for an examination.
Après Crépuscule places particular focus on the principle of „What if ...“, which is based on the idea of using an undogmatic assembly of artefacts of Modernism in order to create a new, not only aesthetically effective reality. In this reality, the boundaries between design and art are not blurred but form an “alternative space“ of historical reference, open for happenings.
This exhibition shows an exemplary mediation between pop and art, far away from known stereotypes and from mutual demands. It covers a time when even renowned artists acted far away from the all-star glamorous ways of our days, and delivers insight into sources that are far from being depleted; it also shows how an aesthetic training from the end of the 20th century onwards really works.

In the form of an annually changing exhibition, Der springende Punkt (the crucial point) provides an insight into the archives of institutions or individuals forming important points of reference for the work of the Kölnischer Kunstverein because of their experimental character and special curator's hand. The exhibition will be designed in close cooperation with an artist or a curator, in this case with Oliver Tepel. The artist⁄curator is invited to screen archive material and develop an adequate form of presentation for it. It is a matter of selecting a certain moment in history, a moment with personal relevance to the exhibitors, rather than presenting an entire archive.
The series Der springende Punkt started in 2007 with Marcel Odenbach's archive project for the exhibition Happening und Fluxus, Kölnischer Kunstverein 1970, and continued in 2008 with a project by Olivier Foulon on Marcel Proust. Après Crépuscule is the third project of this series.
Since 1992 guest curator Oliver Tepel writes about music, art and other cultural phenomena; in particular for newspapers and magazines like Spex, Tagesspiegel, Frankfurter Rundschau, Texte zur Kunst, Mode Depesche and Artnet, as well as for diverse art publications and catalogues. He works as lecturer (for the Städelschule, the Kunstakademie Düsseldorf and the Kunsthochschule Dresden among others) and as curator. Tepel is about to start his own art journal named Organdy, for which he was granted a studio scholarship of the Kölnischer Kunstverein in 2008.