An installation consisting of music, sound poetry, fashion, photography, objects and performance by renowned sound art collective. Grupat's work ranges from a silent musical film and self built instruments by Turf Boon, to the costumes of drag artist The Dowager Marchylove, and a camouflage garden shed that needs to be discovered by torch light. 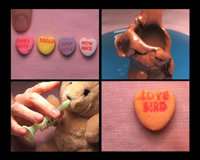 “Without a doubt, hers is the most original compositional voice to emerge in Ireland in the last 20 years.” Michael Dervan, The Irish Times.

For five days sound art collective Grúpat take over the Gallery and Cube space in Project Arts Centre to present a showcase of their innovative and experimental approach to sound. This is the first major Irish retrospective of the collective’s work and features a wide range of works including several newly-commissioned pieces. The Collective works include a Dungeons & Dragons-style sound installation, set in a time where Ireland has been overrun by zombies and werewolves. A drag queen who presents gowns worn in her sonic flâneur performances. A silent ‘musical film’ and over a thousand balloons - in a newly commissioned sound installation where the individual is invited to swing in and out of a vast swarm of balloons and sound, becoming part of the installation.

This exhibition is curated by Irish composer and performer, Jennifer Walshe and was commissioned by South Dublin County Council’s INContext3 Per Cent for Art Programme- which is funded by the Department of Environment, Heritage and Local Government and the National Roads Authority. The exhibition coincides with the release of Grúpat, the first major book about the collective, published by Project Press, and two CDs of the collectives work which feature Jennifer Walshe’s voice.

Performer and composer Jennifer Walshe’s works have been performed and broadcast all over world and awarded many major awards and prizes. In 2007 she was awarded a grant from the Foundation for Contemporary Arts, New York. During 2004-2005 she lived in Berlin as a guest of the DAAD Berliner Künstlerprogramm. As a vocalist, Walshe specialises in extended techniques, and has performed in a wide variety of settings from the Butterfly House of the Royal Imperial Palace in Vienna to the Museum of Arts and Design, New York.