The paintings by Maria Lassnig substantiate the pre-eminent position of her late work which is characterised by intense colouration, vitality and inventiveness. Her radical self-interrogation makes use of richly contrasting and expressive colouration as the expression of an irony that often borders on sarcasm. Together with documents, photographs and audio installations, "Music for all senses" recreate scenes from a 1963 Nam June Paik show: Exposition of Music - Electronic Television held at the legendary Galerie Parnass in Wuppertal. 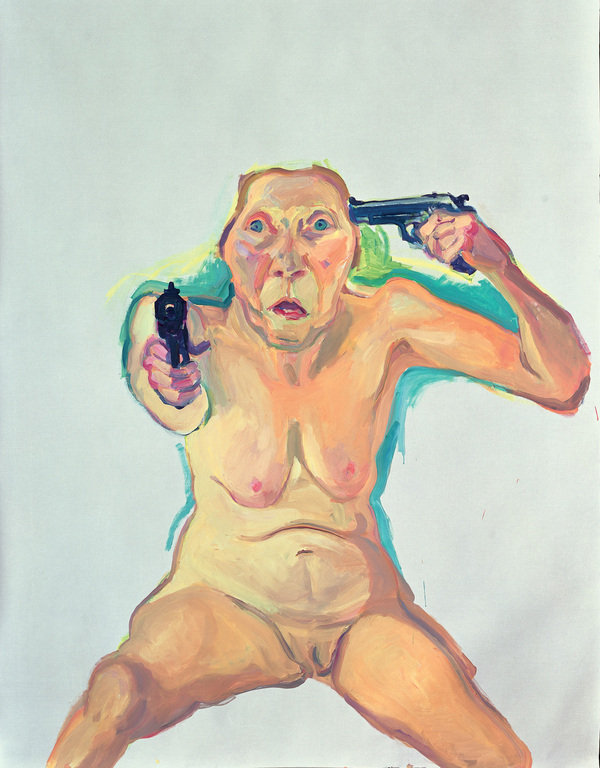 Maria Lassnig is among the most important artists living today. An individual exhibition at the MUMOK celebrating her 90th birthday will concentrate on works made during the past 10 years. All of the more than 60 paintings testify to the sensitivity and diversity of her late work full of life and radiant colors. Recent large-format paintings will be shown for the first time within her show at the MUMOK.

Over the course of her long career, Lassnig has been an important example for many artists, influencing an entire generation of painters. One of the most important aspects of her work throughout her sixty-year career has been to explore the way the body’s sensations are reflected in the medium of painting: “One thing is certain. I don’t paint or draw the body as an ‘object’ but rather the sensations of the body.” (Maria Lassnig, 1999) And she never shied away from expressing her feelings. Whether her strengths or weaknesses – whatever she discovered on her inner journeys was integrated into her paintings.

Maria Lassnig, who often likes to cultivate the aura of a loner and who has said about herself, “Sometimes I wish that I were a little less nice”, has continued to develop her work over the course of many decades. She has consistently made relevant work in dramatically different societal and historical contexts. This has often been one of the reasons why her work has always been difficult to classify. Any specific stylistic trend in her work has only been valid as long as it did not get in the way of new experiences. Her most recent paintings are especially convincing in their independence, striking colors, passionate and often elusive chromatic combinations. Here memory has played an important role as Lassnig stressed in an interview in Artforum: “Memory has become more important to me over the past few years. The outside world impinges on us so much today that it has become almost impossible to depict anything else.”

The exhibition concentrates on the “ninth decade” of Maria Lassnig’s work, showing how it has developed with respect to earlier works, without at the same time becoming redundant. Not without a certain share of irony, she has interpreted themes that she had already worked through before. Once again, there are mystical elements in her work, like for example in the so-called “Kellerbilder” that were made in her basement in Carinthia during a particularly hot summer. She asked some of her younger neighbors to pose for her, giving them some plastic wrap to hold in front of their faces. Here she was making a reference to memories she had of fruit packed in cellophane wrap, which she long ago saw for the first time in a supermarket in New York. During the early 1970s, she had painted a still life with apples and likewise a self-portrait with cellophane wrap. In addition, there are numerous self-portraits with animals along with a series of pictures of memories that go all the way back to her time at the art academy. With nude models she staged a short “Adam and Eve” series. Her recent works have tended towards a new freedom of method, combining her characteristic broad strokes with more naturalistic painting techniques.
“The Ninth Decade” represents the third large-scale “solo show” by Maria Lassnig with the previous exhibitions in 1985 and 1999 having been conceived more as classical retrospectives.

Short Biography
Maria Lassnig was born in 1919 in Kappel am Krappfeld, Carinthia. She began studies with Wilhelm Dachauer at the Academy of Fine Arts Vienna in 1941, but she was forced to leave in 1943 because her works were classified as “degenerate”. She then continued her studies with Ferdinand Andri and Hebert Boeckl. During the 1950s and 1960s, she spent many years in Paris, coming into contact with surrealism and other contemporary art movements such as American and French art informel.
The first body-oriented watercolors are made at this time. From 1968 to 1980, Maria Lassnig lived in New York where she took part in a class at the School of Visual Arts on animated film after which she began making her own films. In 1980, she returned to Austria and became a professor of painting at the Academy of Applied Arts Vienna, the first woman to do so in any German-speaking country. Her work gained increasing recognition as she along with Valie Export represented Austria in 1982 at the 39th Venice Biennale and took part in the documenta 7.
In recognition of her life-long contribution to art, she has already received many important awards, including the Grand Austrian State Prize (the first woman to be awarded it in 1988), the Oskar Kokoschka Prize (1988) and the Max Beckmann Prize of the City of Frankfurt (2004).

Nam June Paik has already entered history as a pioneer of video and media art and as a member of the Fluxus movement. In 1963, he had his first important show “Exposition of Music – Electronic Television” where he made a bridge between music and the electronically generated image. Using different media and materials, including the legendary “Klavier Integral” and the first modified television work “Zen for TV” – both of which are in the possession of the MUMOK – the young artist and music theorist displayed a broad understanding of music that appealed to all senses, placing a special emphasis on speculation and improvisation.

The MUMOK exhibition “Music for all Senses” presents the museum’s extraordinary collection of Nam June Paik’s early works. The show has been envisioned following the spatial and participatory conception that Paik developed for his first exhibition in 1963. The avant-garde gallerist Rolf Jährling had offered him an exhibition covering 3 floors at the prestigious Galerie Parnaß enabling Paik to stage a spectacular show from the basement to the surrounding living space: record players and sound installations, a room with prepared pianos, Dadaist objects such as a Dada puppet in the bath tub, a room with mirrored glass or Zen objects in the basement caused as much of a stir as the head of a freshly slaughtered steer that greeted the visitors at the entrance. The main attraction, however, was a room with 12 manipulated television sets that could be operated by members of the audience. He modified the televisions in such a way that the running television program itself was distorted. The opening hours of the ten-day-long exhibition were set up to correspond to the television schedule, being open from 7:30 until 9:30 p.m.. Paik was trying to find new ways to think about and make music, inspired in part by the work of the American composer John Cage whom he had met a few years before. It was intended that the audience would perceive the exhibition as a complete experience, where performance, music and the televised image were fused together as one. During “Exposition of Music”, the already very well-known Joseph Beuys had the honor of destroying one of the pianos.

With the suggested simulation of space, the large-format documentary photographs of the original exhibition and the interactive installation, “Music for all Senses” should evoke the original feeling of “Exposition of Music” and allow Paik’s works to come to life. Separate works such as the audio tape “Random Excess” and “Schallplatten Schaschlik” highlight the interactive aspects of the exhibition.

Short Profile of Nam June Paik
1932 born in Seoul Korea; 1950 emigration to Japan; 1953-56 studies music, art history and philosophy at the university of Tokyo; 1956-57 studies art and music history at the university of Munich; 1957-58 studies composition at the Musikhochschule Freiburg; 1958 first contact with John Cage; 1958-63 works at the studio for electronic music at the WDR in Cologne; during the 1960s work with Fluxus artists; 1963 Exposition of Music- Electronic Television; 1964 moves to New York; Becomes one of the pioneers of video art, working on tapes, installations, sculptures and television events; 1978 professor at the Art Academy in Düsseldorf; lived and worked in New York and Florida; 2006 Nam June Paik died at the age of 73 in Miami.