Linda Bilda presents her comic project, The Golden World. In the exhibition the comic is transformed into a three dimensional architectural form that works with installation, light projection, and murals. Anna Artaker displays images of death masks from the Merkurov Museum in Gyumri, Armenia that the Armenian Soviet sculptor, Sergei Merkurov (1881-1952), created of the heroes of the Soviet Union. 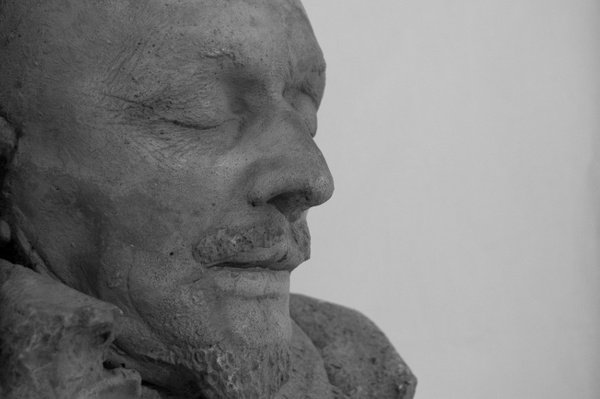 LInda Bilda. The Future and End of the Golden World

The Viennese born artist, Linda Bilda, presents her comic project, The Golden World, at the Salzburg Kunstverein; she has been working on this since 2004. In the exhibition the comic is transformed into a three dimensional architectural form that works with installation, light projection, and murals.

The Golden World is a chronicle and description of our time that maps the economy, states, contradictions, development potentials, and destructiveness. Based on a 1976 text by J.P. Voyer, "An investigation into the cause and the nature of the misery of people," in her comic project Linda Bilda explores the degree to which the economy is the reality of the world.

In the golden world it is about money, a lot of money: one billion dollars. The wealthy Rick Subisha has died and left his assets to friends with one constraint: she or he who makes the most profit from it within one year will get it. A race against time begins in which people’s characters and their relationship to money are depicted and approaches and attempts to get money that are typical of our time are presented.

The topicality of the issue that affects all of us contributes to the creation of a stimulating and direct discourse with the visitors.

In her first solo show in Salzburg, Anna Artaker displays images of death masks from the Merkurov Museum in Gyumri, Armenia that the Armenian Soviet sculptor, Sergei Merkurov (1881-1952), created of the heroes of the Soviet Union.

The title of the exhibition describes what you see and also refers to Kurt Kren’s film, “48 Köpfe aus dem Szondi Test” (48 Heads from the Szondi Test - 1960). However, the photos of institutionalized psychotic people in Kren’s film are superseded by Merkurov’s plaster masks as bearers of presence and significance. Filmed as objects (16mm, b/w) and captured in two photographic perspectives (portrait and profile), the chronologically organized masks are both fragments of Soviet historiography and eerie faces of their (dead) heroes.

Sergei Merkurov studied under Auguste Rodin in Paris and got to know Lenin in exile in Europe. After the October Revolution he became an “official” sculptor of the Soviet Union, and until his death in 1952 he mainly created monumental sculptures of Soviet heroic figures. He also made death masks of over 300 of the most significant people in the Soviet Union including Lenin, Sergei Eisenstein, Leo Tolstoy, and Maxim Gorky as well as party functionaries like Felix Dzerzhinsky, head of the feared Cheka secret police, or Andrei Zhdanov, responsible for the repressive policies on culture and censorship under Stalin. The museum, located in the house where the sculptor was born, collected about 50 of his death masks.

The portrait photos from the personality test developed by the psychiatrist Leopold Szondi (1893-1986) in 1937 are the source of material for Kurt Kren’s film “48 Heads from the Szondi Test” (1960). The test works with 48 portrait photos, from which the participants select people who appear appealing and unappealing. Based on the selection of faces, which all belong to mentally ill people in the psychopathological sense, Szondi attempted to deduce the test participants’ mental constitution.

The staccato rhythm in which Kren presents the faces from the Szondi Test makes the intended viewing of the portraits impossible. By playing with the picture/image as a conveyor of meaning, Kren’s film challenges the attribution/registration of qualities in the human physiognomy.

Anna Artaker explores the iconography of (Soviet) propaganda based on the stylization of faces into hero masks through transferring the auratic death masks (“the last face”) into the (mass) media of film and photography. At the same time, she reflects on the mass media’s application of the auratic image based on the seemingly meaningful physiognomy of the mediatized personality. In this context, the mere image of the face fades out the content, because the subject’s traits are only allegedly inscribed upon it. Thus the impressions of the dead (more or less famous) faces point to the desire for evidence of meaning exactly where only illegible traces remain, upon those which making the invisible visible was imposed.

Anna Artaker, born in 1976, lives and works in Vienna. She studied art and philosophy in Vienna and Paris and works with image production in historiography and with the relationship of photography to its subject, i.e. the reality to which every photo refers (and that which it either represents, stages, idealizes, criticizes…).