Pause: performance and an exhibition by Jean-Pierre Khazem in a space by Andreas Angelidakis; it brings together performance, art, photography, architecture, design and much more - not side by side, but together, as the various components of one and the same overall project. Under/Covered: by Adelle Lutz, will show four separate pieces with one thing in common: they all use human hair as the main expressive component. 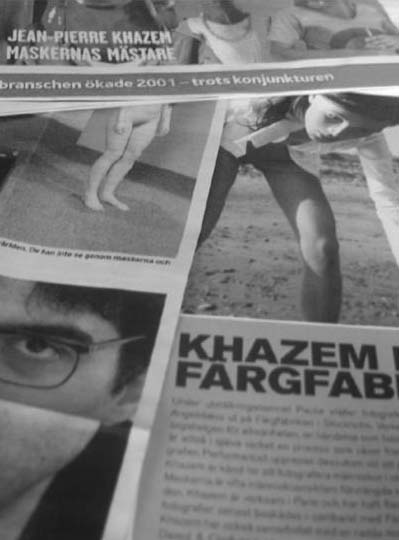 FÃ¤rgfabriken is proud to present PAUSE - a performance and an exhibition by Jean-Pierre Khazem in a space by Andreas Angelidakis.

PAUSE is much more than an exhibition. It is the result of a process that has been going on for several years, in which FÃ¤rgfabriken has had a close dialogue with photographer and artist Jean-Pierre Khazem from Paris, and with architect Andreas Angelidakis from New York. What was initially a project of fairly limited ambitions has, in time, grown into what will be FÃ¤rgfabriken's hitherto biggest production. It brings together performance, art, photography, architecture, design and much more - not side by side, but together, as the various components of one and the same overall project. This will also be reflected in a book which will be produced in connection with the exhibition, as well as in web productions and video documentation.

PAUSE began in an exchange with Jean-Pierre Khazem. His pictures, in which he consistently uses masks on his models, have attracted worldwide attention, both in art circles and in commercial photography. He photographed last year's talked-about global Diesel campaign. He has also worked with most of the important fashion and lifestyle magazines in the world, and has exhibited as an artist in a number of places in France and other countries. Because he always puts masks on his models, his shoots become a kind of performance acts. Behind the mask, the models are blind, which changes their relationships both to their own bodies and to the outside world. And the onlooker's relationship to the model changes too, as the model becomes as much sculpture as human being. This is also reflected in Khazem's pictures.

Ever since its inception in 1995, FÃ¤rgfabriken has been greatly interested in investigating and staging processes rather than traditional exhibitions. In this way, its projects become a kind of investigations in which those involved have an opportunity to try new paths, and at the same time reflect on themselves. With Jean-Pierre Khazem it seemed natural, therefore, to try to find a way of allowing the public to take part in something more than the simple presentation of the final result, the printed photographs. We wanted to find a way of showing the full, rich process behind his pictures.

That is why architect Andreas Angelidakis was invited to join the project - so that he might make a stage and a space for Jean-Pierre Khazem to work on and in. Andreas Angelidakis is one of the most interesting younger architects of today. He was shortlisted for the Cooper Union award as the best architect in the United States in 2001. He is equally at home in real and in virtual settings, and his projects - like Khazem's pictures - often straddle the border between the real and the computer-animated. In keeping with this, Angelidakis has created a space that turns concepts on their head - and which serves as a backdrop and a stage for Khazem's shoots, for the performances and for the final exhibition.

In order to document PAUSE and to present Jean-Pierre Khazem for the first time, a book will be produced in connection with the project. Behind it is FÃ¤rgfabriken in collaboration with Janvier/ Les Presses du RÃ©ell in France; it will be printed by Tryckhus 2 in Stockholm on paper from Svenskt Papper. It will feature texts by Jan Ã…man, Massimiliano Gioni, Karina Ericsson WÃ¤rn and Nikola Jankovic and will run to approximately 200 pages, all 4-colour. The book will be designed by Stefania Malmsten.

Thus PAUSE has become an extensive project which will unfold in several stages.

1. Five models have been selected, and mask-maker Anthony Ritter in Paris has been commissioned to create individual masks for each one of them. 2. Andreas Angelidakis' large structure - an architectural manifestation unlike anything previously seen, and a major event in itself - will be built in collaboration with Skanska Nya Hem. The importance of PAUSE for contemporary architecture will be followed up in a series of seminars hosted by FÃ¤rgfabriken and Skanska, in April and May. 3. When the structure is ready, Jean-Pierre Khazem will use it to photograph a total of 19 images. They will be shot digitally, allowing Khazem, Angelidakis and Stefania Malmsten to proceed simultaneously with their work on the exhibition and the book. 4. After the shoot, the exhibition pictures will be produced and mounted in Plexiglas in Paris, through Galerie Emmanuel Perrotin, and then transported to Sweden. At the same time, Stefania Malmsten will be working on the book about PAUSE. 5. On March 16, the exhibition will open - and the public will be able to take part in a concentrated version of the entire process. It will begin with a live performance with the models and then turn into a photography exhibition. The performance will be repeated during the exhibition period (the last day is April 28). 6. During the exhibition period, two seminars will be held on contemporary and future architecture, focusing on new consumer habits and behavioural patterns. The seminars will be hosted by FÃ¤rgfabriken and Skanska in collaboration. 7. During the last week of the exhibition, the book about PAUSE and Jean-Pierre Khazem will be presented.

PAUSE is curated by Jan Ã…man of FÃ¤rgfabriken. Co-curator is Nikola Jankovic, Paris.

PAUSE is produced by FÃ¤rgfabriken in collaboration with Skanska/Nya hem, Alcro-Beckers, Tryckhus 2, Svenskt Papper, the French Embassy in Stockholm and AFAA, among others. FÃ¤rgfabriken's main sponsor is the LindÃ©n Group.

FÃ¤rgfabriken has great pleasure in presenting UNDER/COVERED, which is nothing less than the first one-woman show by Adelle Lutz.

Based in New York, Adelle Lutz is best known for her costume work for the screen and stage. She has worked with Paul Auster, Robert Wilson and Twyla Tharp, among many others, and she designed many of the Talking Heads' legendary outfits. Adelle Lutz has also worked directly with magazines - one memorable collaboration was her 1989 "fashion editorial" for Harper's Bazaar, in which she presented clothes she thought Jesus ought to wear if he were to drop in on present-day USA.

Her work - past as well as what she is showing now - can truly be regarded as one body of artistic endeavour, but this show at FÃ¤rgfabriken is her first as a single artist in her own right. In the past she has participated in group shows and exhibited in collaboration with her husband, David Byrne.

At FÃ¤rgfabriken, Adelle Lutz will show four separate pieces with one thing in common: they all use human hair as the main expressive component. Visitors will first encounter Corporate Adam & Eve - two mannequins, one male and one female, one wearing a beige suit and the other a beige dress - and both with gender-appropriate body hair on the outside of their clothes. Another piece consists of three chairs - one blonde, one brunette and one redhead. There is also a series of drawings labelled The Tornado Drawings, and finally something she calls The Sleeper Series - models of beds, on which lie pillows adorned with texts of embroidered hair.

Anne Pasternak, who initiated the exhibition together with FÃ¤rgfabriken's Jan Ã…man, writes in the catalogue that "hair by hair and stitch-by-stitch, Adelle Lutz's sculptures and drawings are meticulously crafted. Working with creative fields like clothing design, embroidery, and domestic crafts - disciplines traditionally and globally relegated to the "female sphere" - Adelle makes art which is at once elegant, perverse, and unabashedly strong. Humor and the absurd are coupled with beauty and elegance."

Adelle Lutz herself writes that "hair is pretty creepy in that it can keep on growing after a person dies. But these pieces have nothing to do with death."

These texts, plus one by Jan Ã…man, are included in the 48-page, four-colour exhibition catalogue, designed by Richard HammarskiÃ¶ld.

UNDER/COVERED will run in parallel with PAUSE, an exhibition and a performance by Jean-Pierre Khazem in a space by Andreas Angelidakis. And while her show at FÃ¤rgfabriken is on, Adelle Lutz will take part in Camouflage, an exhibition at MU DAC in Lausanne, where she will be collaborating with photographer Annie Liebovitz.