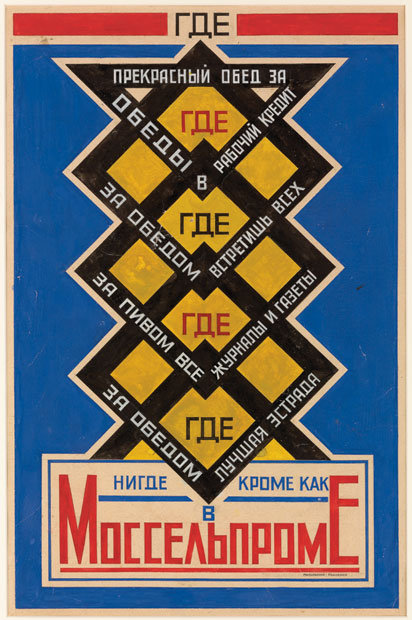 The Russian Revolution was accompanied by a remarkable period of artistic experiment known as Constructivism, which questioned the fundamental properties of art and asked what its place should be in a new society. The Constructivists challenged the idea of the work of art as a unique commodity, explored more collective ways of working, and looked at how they could contribute to everyday life through design, architecture, industrial production, theatre and film.

Liubov Popova (1889-1924) and Aleksandr Rodchenko (1891-1956) were pivotal figures in the debates and discussions that defined Constructivism. Rodchenko, whose wife Varvara Stepanova was a major artist in her own right, energetically embraced almost all of its manifestations, from advertising to photography and film. Popova's achievements in painting, theatre, and graphic and textile design took place in spite of ill health and tragedy: her husband died of typhoid in 1919, and she spent a year recuperating from the illness herself. In 1924 she and her son both died of scarlet fever.

The Constructivists compared the artist to an engineer, arranging materials scientifically and objectively, and producing art works as rationally as any other manufactured object. This was, in theory, an art that transcended gender differences. The equality of the sexes was an important Communist principle, and this was one of the first periods in history when female artists were valued as highly as their male counterparts.