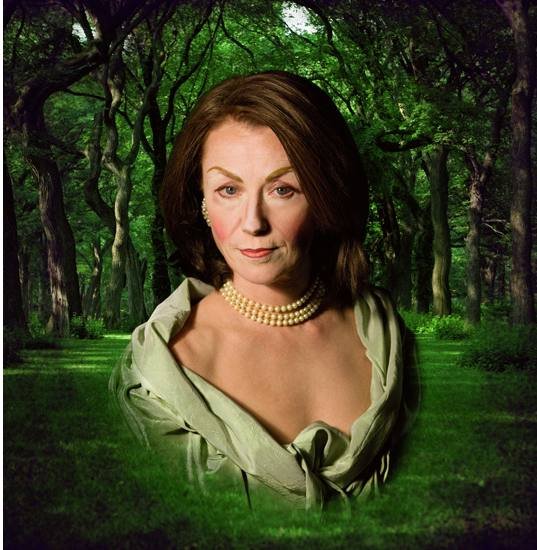 Sprüth Magers Berlin is delighted to present Cindy Sherman’s first exhibition of new work in Europe since 2004. The fourteen colour photographs assembled develop Sherman’s longstanding investigation into notions of gender, beauty and self-fashioning, and reveal a particular concern to probe experiences and representations of aging. Working as her own model for more than 30 years, Sherman has developed an extraordinary relationship with her camera, and her audience, capturing herself in a range of guises and personas which are by turn alarming and amusing, distasteful and poignant. A remarkable performer, subtle distortions of her face and body are captured on camera, leaving the artist unrecognizable as she deftly alters her features, and brazenly manipulates her surroundings.

To create her photographs, Sherman shoots alone in her studio, assuming multiple roles as author, director, make-up artist, hairstylist, wardrobe mistress, and of course, model. The idea and experience of getting dressed up and putting on a show is central to Sherman’s practice, yet Sherman is also careful to closely manage the detail of each performance. Every bulge of flesh, strand of hair, rouged cheek or wrinkled brow is deliberately orchestrated to construct a vividly real yet curiously inscrutable character. The tension between pathos and alienation which Sherman’s figures evoke in the viewer are heightened by the contexts in which they appear, always obviously staged and cleverly apposite. Her creations are photographed in front of a green screen, and then digitally inserted onto backgrounds which are shot and manipulated separately, scenarios which elaborate and complicate the narrative constructed by Sherman’s garb and gaze.

Each of the women which feature in Sherman’s new exhibition share an acute consciousness of glamour and social hierarchy, which is both disquietingly flagrant and sardonically relevant to contemporary obsessions with image and status. In one photograph (Untitled #465, 2008), the fiercely proud eyes of a woman installed in her warped and blurred country estate stare out of a face regrettably cracked and peeling with age, ill concealed by make-up, hair-dye or expensive pearls. In another work from the series (Untitled #467, 2008), a woman with a tight sequined skirt, fake gold jewellery and extravagant fake white nails also glares out, perhaps daring the viewer to call her trash, or ruefully acknowledging that this is what she is. It is ultimately impossible, however, to fix any stable narrative in Sherman’s work; different levels of pretence and authenticity operate and interact in her images to complicate any straightforward reading of her characters, or the stories they might tell the viewer.

Cindy Sherman’s work has been widely collected and exhibited by major museums throughout the world since 1980. Major solo exhibitions include the Serpentine Gallery, London and the Scottish National Gallery of Modern Art in 2003, the San Francisco Museum of Modern Art in 1998. Major group shows include Palazzo Grassi, Venice and the Institute of Contemporary Arts, London in 2006, the Guggenheim Museum, New York in 2003 and the Centre Pompidou, Paris and The Museum of Modern Art in 2000. She has been the recipient of a number of major awards over the course of her career, including the John Simon Guggenheim Memorial Fellowship in 1983 and the MacArthur fellowship in 1995. Cindy Sherman lives and works in New York.

A selection of works from this exhibition will also be shown at Sprüth Magers London, 16 April – 30 May 2009.

Sprüth Magers Berlin is delighted to host Andrea Zittel’s artistic enterprise, ‘Smockshop’, in their gallery space in Berlin this spring. This is the first time the Smockshop (www.smockshop.org) has set up its stall outside North America, and it is also scheduled to be the last time it opens for business at all, making this a unique opportunity to experience Zittel’s artistic and economic experiment. Two artisans will work in the gallery for the first four days of the exhibition making the smocks that are available for purchase right after their production. The works will be then on view in the gallery throughout the whole exhibition period. The double wrap-around garments designed by Zittel collectively represent an aesthetically diverse yet functionally uniform body of work. Extending Zittel’s longstanding interest in the form and function of everyday life, the smocks develop a modernist tradition of clothing design and manufacture, extending back to the Russian avant-garde, which emphasises utility and economy, and inclines towards an alternative experience of clothing to the prevailing discourse of fashion.

Each smock conforms to the same basic shape and form, but there is nonetheless an infinite array of colour, texture and pattern possibilities, as their method of manufacture derives from Zittel’s principle that ‘rules make us more creative’. Since it was founded in 2007, almost 300 smocks have been made by the collective. The process of making is collaborative, as each smocker is given license to interpret and rework Zittel’s designs according to their own interests and skills. The clothes range from monochrome simplicity to lurid dazzle, and from formal elegance to sculptural inventiveness. Yet though each smock is completely unique, they have all been designed and made with a sense of universal functionality in mind; suiting most body sizes or shapes, and offering socially appropriate attire in both casual and formal settings, the smock is conceived as a garment for everywoman (and maybe everyman) at any time.

The Smockshop is part of Andrea Zittel’s ongoing artistic project, to make work which is rooted in daily routine, and the functional experience of everyday living. Food, furniture, shelter and clothing have all at times been sites of investigation of how modern life is lived, and how we construct, define and distinguish between our wants and needs. From 1994, for six years, ‘A-Z East’, a small three storey storefront building in Brooklyn, New York, became the testing ground and showcase for her experimental inquiries into why people eat, sleep, wear, wash and generally live in the ways that they do. In 1999, she relocated her enterprise to ‘A-Z West’, a 25 acre site in the californian desert, where Zittel’s home, studio, and ‘experiments in living’ research and development facility continue to be based.

Andrea Zittel trained at San Diego State University and Rhode Island School of Design. Recent solo exhibitions include IKON Gallery, Birmingham (2001), Museum of Contemporary Art, Los Angeles (2005), and the Whitney Museum of American Art at Altria, New York (2006). The Smockshop has traveled throughout the USA, and is making its European debut at Sprüth Magers Berlin.