The display provides special insights into the artist's thought process and interests. Many of the themes in the show take their inspiration from the story of the Russian Linesman, whose controversial ruling in the 1966 World Cup final between England and Germany changed the course of footballing history. For his selection, Wallinger creates an exhibition that investigates many of the issues that have concerned him as an artist over the past 25 years, in particular ideas of boundaries, thresholds and arbitrary divides, whether physical, political, psychological or metaphysical. 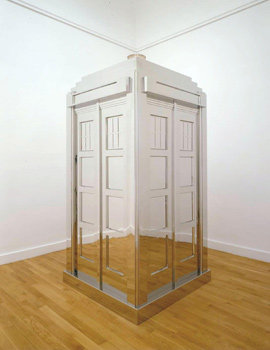 "History is a nightmare from which I am trying to awake."
James Joyce, Ulysses

Turner Prize winner Mark Wallinger is one of Britain's most original artists, creating works that combine intellectual curiosity with wide public appeal. This Hayward Touring Exhibition, which opens at the Hayward before moving to Leeds and Swansea, is the first gallery exhibition curated by Wallinger and provides special insights into the artist's thought process and interests. The title and many of the themes in the exhibition take their inspiration from the story of the Russian Linesman, whose controversial ruling in the 1966 World Cup final between England and Germany changed the course of footballing history. For his selection, Wallinger creates an exhibition that investigates many of the issues that have concerned him as an artist over the past 25 years, in particular ideas of boundaries, thresholds and arbitrary divides, whether physical, political, psychological or metaphysical.

Navigating almost 2000 years of history from an early Roman double-headed marble bust of Dionysus and Silenus, through popular 'View-master' stereoscopic photographs and 18th Century trompe l'oeil paintings, to a woodcut by Albrecht Dürer showing a device for rendering objects in two dimensions, the show explores the ambiguities present in our own perceptions and how the lines between fact and fiction are often blurred and manipulated. The show also includes Mark's own work Time and Relative Dimensions in Space (2001), a life-sized mirrored representation of the Tardis from Doctor Who, first shown at the Venice Biennale. Related works in the show will be grouped together, in order to create unexpected dialogues and interpretations.

Ralph Rugoff, Director of The Hayward, said;
"Wallinger's work is renowned for it probing content. The Russian Linesman is an opportunity for Mark to channel this inquisitiveness into organising an exhibition that brings together contemporary and historical works by other artists that have either influenced him or share his interests, as well as an intriguing mix of objects from such diverse fields as science, politics and anthropology. The results encompass a broad swathe of history and follow a captivating thought process that will both amuse, puzzle and engross visitors, and that can only have come from the mind of Mark Wallinger!"

Mark Wallinger said:
"I was delighted to be offered the opportunity to curate a Hayward Touring Exhibition and to start it at The Hayward in London. I have always been interested in how we define and are defined by thresholds and boundaries, the events of history. The works in the exhibition use illusion, artifice and dislocating devices to look at our accidental time and place in the world afresh."

Highlights in the exhibition include: A Dead Soldier by an anonymous painter, which was originally attributed to Velasquez and was the source for The Dead Matador by Manet, who thought it was by the Spanish master; historical and contemporary trompe l'oeil images, from LL Boilly's Ivory Crucifix on Wall of 1812 to Vija Celmin's 1977 To Fix the Image in Memory XII, a stone exactly replicated in bronze, and Thomas Demand's Poll 2001, a representation of a polling station during the Florida recount; Tacita Dean's 1996 work Foley Artist which follows the technicians creating radio and TV sound effects, demonstrating the ingenuity, complexity and 'lies' required to mimic everyday sounds.

This exhibition is the latest in an ongoing Hayward Touring series curated by artists including Michael Craig-Martin, Tacita Dean, Susan Hiller and Richard Wentworth.

Mark Wallinger is one of three artists short-listed for Britain's largest public art commission, the new Ebbsfleet Landmark which lies on the gateway to London, to be announced in late February.

Mark Wallinger's The Russian Linesman is a Hayward Touring Exhibition and opens at The Hayward on 18 February – 4 May 2009
The Hayward, Southbank Centre, Belvedere Road, London, SE1 8XZ
http://www.southbankcentre.co.uk/visual-arts
Information and tickets: 0871 663 2519

Following its showing at The Hayward, the exhibition will tour to Leeds Art Gallery from 16 May – 28 June and Glynn Vivian Art Gallery, Swansea from 18 July – 20 September

Catalogue
A fully illustrated catalogue will accompany the exhibition, with an essay by Mark Wallinger
ISBN: 978 1 85332 271 6

Public Programme
To accompany the exhibition, The Hayward has programmed a series of events and lectures that complement and further explore the individual works within the exhibition:

Free with the exhibition ticket

As well as Mark Wallinger's The Russian Linesman, visitors will have the chance to see Annette Messager: The Messengers from 4 March 2009.