The Unanimous Life. The artist explores the links between record, memory and testimony in a selection of video and film works as well as sculptures and photography. Ranging from earlier pieces shot using old Soviet film equipment to newer works, this selection of Narkevicius' oeuvre lays bare the paradox inherent in a society's collective memory and projections of themselves in future. The works are spread throughout the 'Oudbouw', the historic old building of the museum, allowing the visitor to follow his development as a story teller and image maker. 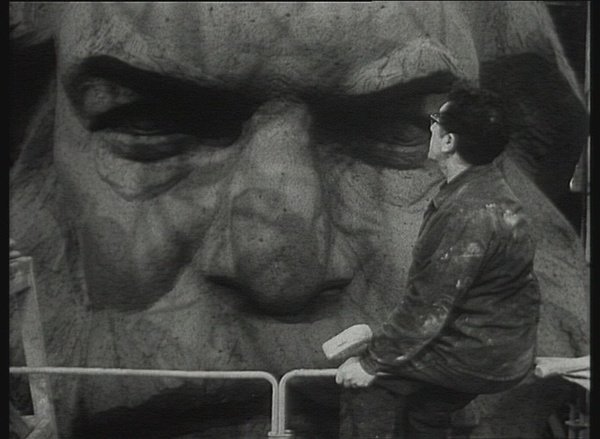 In this new solo exhibition, Deimantas Narkevičius (Lithuania, 1964) explores the links between record, memory and testimony in a selection of video and film works as well as sculptures and photography. Ranging from earlier pieces such as Europe 54° 54’ – 25° 19’ (1997), shot using old Soviet film equipment, to newer works like Revisiting Solaris (2007), this selection of Narkevičius’ oeuvre lays bare the paradox inherent in a society’s collective memory and projections of themselves in future.

His work can be described as a skilful synthesis of contemporary biographies layering historical footage that shows audiences how easy it is to mythologise reality. This major retrospective represents the first opportunity for Dutch and regional audiences to see in detail a broad selection of the artist’s films and other works produced over the past 10 years. The works are spread throughout the ‘Oudbouw’, the historic old building of the museum, allowing the visitor to follow Narkevičius’ development as a story teller and image maker.

Reality and myth
Narkevičius is an artist whose work is primarily developed in film and video format, although on occasion he has also worked with sculpture, photographs and installations. His oeuvre subtly addresses a key theme in modernday societies: our relationship with temporality and memory. Specifically, Lithuania’s transition from a Soviet society to the constitution of an independent democratic state has given Narkevičius an opportunity to emphasise the importance of understanding the emergence of a new dimension of historical time. The need to understand the connection between the memory of life experiences and the memory of imagined events is clearly expressed in works such as Scena (2003) and Energy Lithuania (2000), and is even more radically evident in one of his latest pieces, Revisiting Solaris (2007). However, it would be a mistake to describe his work as documentary. What Deimantas Narkevičius’ various creations lead us to believe is that it is as easy to mythologise reality – what has happened or is happening – as it is to discover that myths are capable of generating powerful effects of reality.

Right from the start, spectators are drawn into a situation where they must discern the useful pasts from the disposable ones; and at the same time, they become aware of the importance of producing a collective imagery of what is to come, grounded in a full awareness of its potential political applications.

Vilnius and Lithuania
Deimantas Narkevičius emerged as part of a wider community of artists and curators based in the Lithuanian capital Vilnius at the beginning of the 1990s. This group was centred around the Contemporary Art Centre in Vilnius, which was an extremely productive space for presentation and discussion. While Vilnius continues to be an important art centre in the region, this period of change in the 1990s gave the artists from Narkevičius’ generation a particularly rich experience that has remained a shaping factor in their art.

The works of Narkevičius are strongly influenced by Soviet-era film making traditions, combined with constructivist, conceptual and post-conceptual strategies. Narkevičius encountered some of these after the renewed independence of Lithuania in 1991. His production therefore crosses over and through the divide in what might be termed the ‘aesthetic ideology’ that marked the Cold War period. While the western half of the 1945 line of demarcation in Europe issued a militant call for artistic autonomy, the socialist east emphasised almost exclusively the social and political function of art. Having experienced both sides, many of the films by Narkevičius touch on the wider contradictions and instrumentalisations inherent in both positions. He explores the perceptual possibilities that living through a change of systems offers to an artist, especially in his apparent understanding of history as a series of events that can always be subject to revision and renewed interpretation.

Narkevičius and the Van Abbemuseum
Deimantas Narkevičius has already become an important artist for the Van Abbemuseum. In 2008, Narkevičius won the prestigious Vincent Award, annually presented at the Stedelijk Museum Amsterdam. The work Energy Lithuania (2000) was one of the first purchases Charles Esche made after he started as director of the Van Abbemuseum in 2004. It is a crucial film, not only in his oeuvre, but also in the process of reflection on the dramatic global changes which were announced with the collapse of real existing socialism in 1989. For over a year, this film was shown in the museum together with a group of works from the El Lissitzky collection. This combination, linking the beginnings of the Soviet experiment with its aftermath, was a way to bridge the commonly perceived divides in western European understanding and to link the past programme as a museum with the current policy of focusing the collection on work from Central and Eastern Europe. The museum has since then added one further work, Revisiting Solaris (2007), to the collection, securing the artist a significant presence in Eindhoven for the future. Now, this full-scale exhibition is a further opportunity to get to know Narkevičius more and to compare his work with other artistic positions from the same period in the presentations of our permanent collection Plug In and Living Archive.

Collaboration
The Unanimous Life has been organised by the Museo Nacional Centro de Arte Reina Sofía (MNCARS) in Madrid, in collaboration with the Van Abbemuseum.

Publication
In conjunction with this exhibition, a catalogue (English/ Spanish) will be published at the end of February by the museum Reina Sofía, containing essay contributions by Christa Blümlingern, Boris Buden, Chus Martínez, Gerald Raunig, and Dieter Roelstraete.