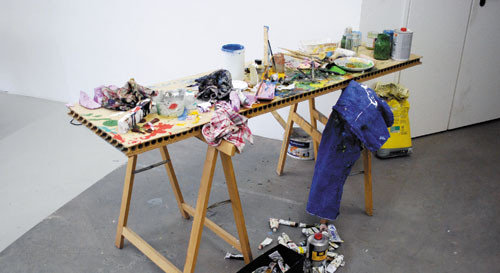 The jazz club Minton’s Playhouse is famous for its role in the development of bebop, where in its legendary jam sessions in the early 1940s, musicians like Charlie Parker, Dizzy Gillespie and Thelonius Monk, pioneered the new music. The correspondent exhibition curated by CARAVAN Berlin conceptually embraces the idea of a jam session defined as a musical act in which musicians gather and play without extensive preparation while responding to each other.

For the show "Minton’s Playhouse" the seven participating artists Matthew Burbidge, Stef Heidhues, Bo Christian Larsson, Renaud Regnery, Stefan Saffer, Natalia Stachon and Jaro Straub will stage a visual jamsession. The featured works are developed in an artistic pyramid scheme each one reacting to a previous piece. The starting point is marked by the work "they think it’s a good idea", 2009 by Matthew Burbidge: a sculpture representing the fictitious workplace of a painter. As a frozen moment this piece emblematizes the beginning of an artistic working process. At the same time the sculpture conceptually reacts to an e-flux event by Jan Verwoert named "Why are conceptual artists painting again? Because they think it's a good idea“. It thereby opens the exhibit from the very beginning to a broader discourse.

The featured works continuously will change and mutate sticking to the idea of an interpretive improvisation. Changes are to be witnessed at two further dates:

For further information on artists and show please check http://www.caravanberlin.com.