Rolywholyover. Seventh and final Episode. This final installment, a sequence of eight concomitant shows features work by Daan Van Golden, Alan Humerose, Deimantas Narkevicius, Presence Panchounette, Alain Sechas, Marion Tampon-Lajarriette, Pierre Vadi and Ian Wilson. Besides its solo shows devoted to these artists, the museum will also be showcasing a private Genevan collection that brings together works by emblematic artists of minimal and conceptual art and arte povera, along with an exhibition offering a critical reflection on conceptual art. 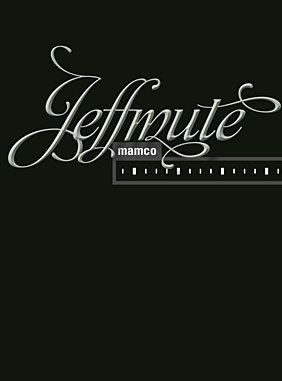 Mamco is pleased to announce the opening of the seventh and last installment in its exhibition cycle Rolywholyover. This final installment, a sequence of eight concomitant shows, is called Jeffmute and features work by Daan Van Golden, Alan Humerose, Deimantas Narkevicius, Présence Panchounette, Alain Séchas, Marion Tampon-Lajarriette, Pierre Vadi and Ian Wilson. Besides its solo shows devoted to these artists, the museum will also be showcasing a private Genevan collection that brings together works by emblematic artists of minimal and conceptual art and arte povera, along with an exhibition offering a critical reflection on conceptual art. Following the recent carte blanche given to Sylvie Fleury for her monumental retrospective, Mamco returns to an approach that makes multiple uses of the entire venue, allowing the museum to diversify its point of view on contemporary art and spotlight its loyalties while making room for new proposals.

Mamco is presenting the first Swiss retrospective devoted to the work of the Dutch painter Daan Van Golden (Rotterdam, 1936). Although an atypical figure on the art scene and a nonconformist who has warily kept his distance with respect to the market and the major art movements, Van Golden is neither an unknown nor a marginal actor in the world of art, having been invited, for example, to show in the most important institutions and represent the Netherlands at the 1999 Venice Biennale. The method employed by the artist has been in place from the very start, when in 1963-1964, while living in Japan, he began to reproduce motifs found on cloth handkerchiefs and wrapping paper. Since then his repertoire has changed little and includes floral motifs, grids, organic forms and more recently details lifted from works by the grand masters of modern art (a parrot borrowed from Matisse or a segment from a Pollock drip painting, for example). Red and Blue, the retrospective that Mamco is devoting to Van Golden’s work, returns for a second look at the show that the curator Anne Pontégnie recently mounted at the Camden Arts Centre in London. The exhibition brings together some twenty canvases dating from 1964 to 2007, as well as two major series of photos, Youth Is an Art (1978-1996), a series of portraits of the artist’s daughter; and the 56 black-and-white photos of Wales Picture (1967-1975). An exhibition catalogue copublished by Camden Arts Centre and Mamco is available.

The Genevan photographer Alan Humerose (1956, Couroux) has a new series of photos he is screening as a slideshow called Les Grands Centièmes (The Great Hundredths). The hundred or so images that currently make up the series are diptychs that the artist creates by randomly juxtaposing on a square screen two photos shot in a horizontal format, one showing a landscape and the other the portrait of a woman. After several months of traveling the world, Humerose has returned with a number of striking landscapes featuring wide-open spaces as well as views of cities and ports. He also photographs Geneva, which he explores with the same fascination he manifests in shooting distant places. As for the portraits, some twenty women opened up to the photographer, who succeeded in drawing from them images of great intimacy that give off a feeling of melancholy. At Mamco, the slide display offers a greater number of possible combinations between the two series of each diptych. The portraits and landscapes thus create new echoes, like so many fictions for the visitor to dream up.

Active from 1969 to 1990, the group Présence Panchounette (Christian Baillet, Pierre Cocrelle, Didier Dumay, Michel Ferrière, Jean-Yves Gros, Frédéric Roux and Jacques Soulillou) cultivated a taste for satire, a sense for how to shock audiences, a mix of genres and an aesthetic that gladly exploited kitsch and the absurd in a stinging critique of modernism and the artistic avant-garde. In 1988 at the FIAC art fair in Paris the group presented a show called L’avant-garde a bientôt cent ans (The Avant-Garde Will Soon Be One Hundred Years Old), a reference to Arts Incohérents, or Incoherent Arts. This “academy of the laughable,” which appeared in the late 19th century, regularly made a stir between 1882 and 1893 by mounting extravagant exhibitions that blended provocation, humor and mockery. For Journées d’étude et de rencontres autour des Arts Incohérents, three days of seminars jointly organized by Mamco, HEAD and the Department of Art History of the University of Geneva, the museum will recreate Présence Panchounette’s FIAC show, which Frédéric Roux has redubbed for the occasion L’Avant-garde est la doyenne de l’humanité (The Avant-Garde Is Humanity’s Oldest Lady).

Since the mid-1990s, the visual art of Alain Séchas (1955, Colombes) has been identified with the figure of the cat, a tragic-comic character and recurrent presence in his works that is drawn or sculpted in a wide range of situations (Boxer Cat, Writer Cat, Guitarist Cat, etc.). For over a year, this French artist has been working in a new direction, marking a renewed interest in painting. This latest work, unveiled last year at the Musée Bourdelle in Paris, is on display at Mamco along with a dozen recent canvases, most of which are being shown for the first time here. While not turning his back on what he has done until now, the artist has abandoned figuration and his feline creatures and begun creating a colorful and intuitive abstract painting. It’s worth noting that this show follows an extensive monographic presentation of Séchas and his work called Trivial Pursuit, mounted in 2002 at Mamco, as well as the museum’s recent acquisition of an emblematic piece by the artist (Les Somnambules).

The young French artist Marion Tampon-Lajarriette (1982, Paris) currently lives and works in Geneva. In her work, the artist reappropriates existing images borrowed from the press, television and film. She mounts them, then films, reframes and recuts them, creating in the process videos that blaze new trails in our imagination. Adopting this same method, Camera 1, Plan 8, the video Tampon-Lajariette is screening at Mamco, shows a computer-generated image of the ocean “filmed” in a camera movement similar to a sequence from Alfred Hitchcock’s The Rope. Throughout 2009, the museum is screening the films of the Lithuanian artist Deimantas Narkevicius (1964, Utena, Lithuanian). Un sur trois (One Out of Three) is the title of the first installment of this three-part retrospective, with a program featuring three of the artist’s films. For several years now Narkevicius has been developing a body of film and video work that refers mainly to the history of Lithuania and in particular to the period of transition from a Soviet to a democratic society. The artist’s treatment of the subject, however, is not like documentary filmmaking and holds the genre at arm’s length. Narkevicius’s films question the mechanisms of history based on various ideologies and utopias. History is seen as an instrument for manufacturing myths; through this approach the filmmaker observes events of our collective memory from a point of view that is both distant and thoroughly subjective.

First shown at Mamco in 2002 as part of the Manor Prize, the work of Pierre Vadi (1966, Sion) is featured once again on the museum’s fourth floor for an exhibition that takes something of a look back over the artist’s work thus far. While two galleries display well-known objects from his output such as his resin sculptures, the floor space has been completely rethought in collaboration with the architect Christian Dupraz, a reimagining that forces visitors to adapt to unusual viewing conditions that include lowered ceilings, a narrow corridor, a maze and walls with holes. Amid this inconvenient yet unavoidable way through the exhibition, various openings intrigue the eye and question our perception of things, our fears and our ability to surmount them. This archi-sculpture develops work recently begun at the Swiss Institute in New York for the artist’s show held last December.

A mythic figure in conceptual art, Ian Wilson (born in 1940 in Durban, South Africa) has been working since 1968 with language and verbal exchange as art objects. His pieces take the form of public discussions that are never recorded or filmed in order to preserve the transitory, short-lived nature of language. In a joint undertaking with the Van Abbe Museum of Eindhoven and Macba in Barcelona, Mamco is publishing the first collection of all the discussions created by the artist between 1968 and 2008. In conjunction with the publication, Mamco will feature a selection of Wilson’s pictorial works covering the period before he began using discussion as an art form, along with other works concerning language. A conversation with Wilson is also scheduled for 6 March 2009 at the museum.

Along with the Wilson show, Mamco is extending its reflection on conceptual art with two other events. First, the museum is featuring a private Genevan collection that has some one hundred works, most of which are from minimal and conceptual art and arte povera by artists like Robert Barry, On Kawara, Sol LeWitt and Laurence Wiener. And the collection, it’s worth noting, is not limited to that one moment in art history; it also boasts all of Marcel Broodthaers’s editions, an important collection of works by Sarkis and several pieces by major artists from an earlier age like Auguste Rodin and Henri Fantin- Latour. Finally, along the same lines of reflection, Mamco has mounted I 2CA c , Images d’images de l’art (dit) conceptual (Images of images from (called) Conceptual Art), a show put together by Christian Besson and Valérie Mavridorakis that questions one of the fundamental principles of conceptual art, i.e., the dematerialization of art. An examination of all the publications by which conceptual art was disseminated (reproductions of pages from reviews, press inserts, book covers, installation photographs, etc.) shows that this art movement found expression to a very large degree through images, contradicting its own declared form of existence.