Using formal tropes and material displacement to question art's utility and place in the public sphere, Valentin Carron creates works whose stark graphics belie a succinctly intellectual approach. Florian Maier-Aichen sublimates the rigid constraints of conventional landscape photography, contextualizing his imagery according to the constant tension between its specificity and theatricality. 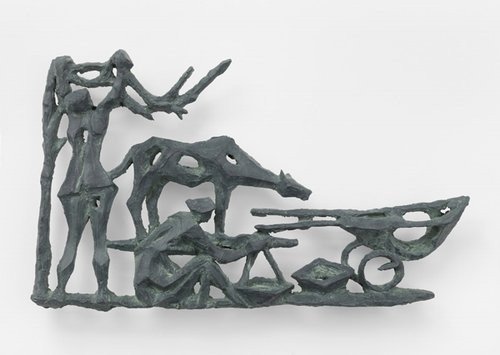 A series of bas-reliefs are inspired by a group of steel sculptures affixed to the facade of an insurance company office. The original pieces by post-futurist Remo Rossi illustrate such traditional work activities as hunting, fishing and ironwork. Painstakingly recapturing the steel details in resin and fiberglass, each of Carron’s re-contextualized copies are given titles that substitute the gamut of modern human emotion for the romanticized antiquity of the prototypes. The concepts of intolerance, contempt, cynicism and snobbery are invoked in a flippant rejection of the authoritative values of an artisanal nobility. The use of resin and fiberglass as materials also signals a proclamation of intent, with modern synthetics crudely approximating the austere shine of the polished steel originals. The caustic nature of their material composition is not immediately apparent, paralleling the underlying emotions referenced in each piece’s title.

Carron works along similar lines with “Clair Matin” (“Clear Morning”), a sprawling piece installed in the back gallery. What is in essence a formulaic copy of a pergola in a typical Swiss chalet is turned sinister in its execution and placement. The somber black polystyrene stands in for the typical burnished and warmly stained wood, hanging over the viewer as an almost threatening, claustrophobia-inducing presence. The suspended beams hang from the ceiling, forms removed from their banality, becoming menacing reminders of the problems which figuratively “hang over one’s head” in day-to-day life. Material-substitution again plays a large role in an untitled pair of nail-clippers rendered in pure gold. Imparting an archaic opulence to a hygienic object, Carron in effect removes all value from the object except that of its materials, as the gold itself prevents the object from accomplishing the utility it was designed for.

Florian Maier-Aichen had a one person exhibition this June at the Museo Thyssen-Bornemisza, Madrid Spain as a part of PhotoEspana and in 2007 at the Museum of Contemporary Art, Los Angeles. His works have been included in exhibitions at the Carnegie Museum of Art, Pittsburgh, the Denver Art Museum, Denver, the Walker Art Center, Minneapolis, and in the 2006 Whitney Biennial, Whitney Museum of American Art, New York. Maier-Aichen lives and works in Cologne, Germany and Los Angeles and this will be his second exhibition at 303 Gallery.

In Florian Maier-Aichen’s second exhibition at 303 Gallery, the artist continues to sublimate the rigid constraints of conventional landscape photography, contextualizing his imagery according to the constant tension between its specificity and theatricality.
Often using elevated, perspectives as a starting point, Maier-Aichen reconfigures elements of the landscape into a new kind of formalism. Incorporating the hidden beauty in the utilitarian model of pioneer photographs with the gestural beauty of natural line and separation, the in-camera framing and effected montage of his subjects become symbiotic. An untitled image taken near Andermatt in the Swiss Alps imagines a plow as a paintbrush, tearing into the negative space of the snow covered alpine pass. The antiquated notion of photography as document ebbs into larger notions questioning rationalism versus romanticism, and how machines relate to nature. In an image such as “Salton Seas (I)”, the dry, topographic efficacy of the vantage point gives way to an almost cubist study of form as layers of earth are shown to ripple in and out of themselves.

The work also examines the relationship and friction between the surroundings of the artist’s dual residencies in Germany and California. Maier-Aichen’s California landscapes spill over with immediate gratification, the artist’s subtle interventions often difficult to fully discern. Contrarily, the European vista of “Der Watzmann”, a photograph referencing Caspar David Friedrich’s most iconic painting, is sent into a world where the colors of the sky are spun into a vacillating color gradient with echoes of Jack Goldstein’s airbrush paintings radiating through the polar fields of light. The suggestion of a certain stoicism in the German aesthetic, even as it extends to the natural world, lends itself to a kind of maximalist imagination that might seem superfluous amidst the undaunted grandeur of California’s panoramas. The ways in which one’s natural surroundings can equate to an overarching manner of thought is, by extension, the cause of progress, movements and history. By tinkering with and reshaping these environments from the inside out, Maier-Aichen raises some of the most elemental questions about the world we inhabit.