The Varieties of Experience. Thomson pairs a distinctly West Coast conceptual sensibility with an interest in cosmology, mysticism, and reception. In his diverse art - ranging from films and sound works to publications, drawings, and photographic wall murals - simple processes of inversion and transformation are joined with an expansive sense of space and context. 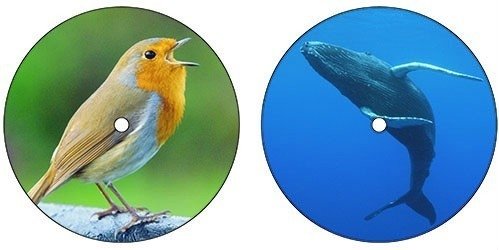 John Connelly Presents is pleased to announce an exhibition of new work by Los Angeles-based artist Mungo Thomson. Thomson pairs a distinctly West Coast conceptual sensibility with an interest in cosmology, mysticism, and reception. In Thomson’s diverse art—ranging from films and sound works to publications, drawings, and photographic wall murals—simple processes of inversion and transformation are joined with an expansive sense of space and context. His project for the 2008 Whitney Biennial, for example, transformed the Museum’s coat check into an enormous musical instrument that was “played” by the incidental participation of the public, the weather, and chance.

b/w, a sound work on a white vinyl 12” LP, applies a principle drawn from marine audio research—where certain deep-sea recordings are inaudible until sped up 16x—to commercial nature relaxation records. One side of b/w speeds up whole albums of humpback whalesong 16x until they resemble birdsong; the other side slows down tracks from birdsong albums 16x until they resemble whalesong. The “birdsong” plays outside onto 27th Street, the “whalesong” plays inside the gallery.
Thomson’s 16mm film, The Varieties Of Experience, was made by using Nam Jun Paik’s Zen For Film (1962-64) as a negative. Zen for Film consists of a length of clear 16mm film leader projecting a rectangle of pure white. Over time, the celluloid collects dust from the space of its exhibition; this dust is projected as brown and black smudges on the otherwise white image. Dust is largely composed of human cells, and in this way the audience of Paik’s work has literally become embedded in it over several decades. Thomson worked with the NJP estate to procure a “dirty” copy of the film and to use it as a negative from which to make a new print. The new film is an inversion of the original: a black film with the dust printed as white specks and clouds—a moving starscape, where the stars are composed of dust (and people) instead of the other way around.

Untitled (Margo Leavin Gallery, 1970-) is a new film that groups together a series of fading analog technologies: the business card Rolodex, stop-motion animation, and Super-16mm film. It features the Rolodexes of Margo Leavin Gallery, Thomson’s Los Angeles art gallery. Since it opened in 1970 the gallery has accrued a massive, well-thumbed set of card files containing thousands of contacts, including artists, electricians, framers, collectors, customs officials, and so on. Now that the gallery has established a digital database these cards can be viewed as a historical archive of the wide systemic context oriented around the reception of artworks. These cards have been transposed to Super-16mm film, where each card gets at least one frame (Super-16mm film and Rolodex cards share a common aspect ratio); the result is a spinning card file that echoes the looping of the film through a projector. On film, the archive becomes a procession. Like The Varieties of Experience, Untitled (Margo Leavin Gallery, 1970-) is a kinetic, semi-abstract chronicle of a particular set of relationships, accumulated over decades, around and between audiences and artworks.

Thomson’s new drawing project, The Ellipses, is also an archive from a pre-digital moment. These drawings are made, in ink on polyethylene, using commercial drafting templates. These templates are made by a number of different manufacturers, in different styles and for different graphic applications. The shapes punched out of the templates represent every projection of the ellipse shape, on a spectrum of 5 to 85 degrees, between a line at one end and a circle at the other. Filled with black ink on a bright white surface, the negatives of these shapes form warping grids and patterns that take on a strong optical character. The drawings are both by and of the templates. As a group they form a graphic record of another disappearing technology.
Mungo Thomson was the subject of a solo Projects exhibition at the UCLA Hammer Museum in 2008. Other recent solo shows have taken place at the Kadist Art Foundation, Paris; and GAMeC, Bergamo, Italy. His work was included in the 2008 Whitney Biennial Exhibition at the Whitney Museum of American Art, New York; the Le Havre Biennial of Contemporary Art in Le Havre, France; The 8th Panama Biennial in Panama City, Panama; The Cinema Effect at the Hirshhorn Museum in Washington, D.C.; and The Possibility of an Island at the Museum of Contemporary Art North Miami, among others. In 2009 Thomson’s work will be included in exhibitions at Kunsthalle Dusseldorf, Germany and at S.M.A.K., Ghent, Belgium. His book Negative Space was published by JRP|RIngier in 2006.