Seven Intellectuals in a Bamboo Forest 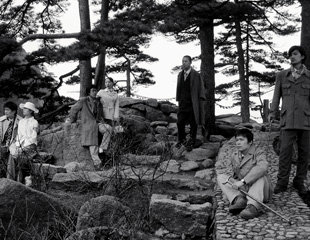 Asia Society presents the first American museum showing of Seven Intellectuals in a Bamboo Forest, by Chinese artist Yang Fudong (born 1971, Beijing). This five-part black-and-white cinematic masterpiece references the legendary Seven Sages, a group of 3rd-century Chinese intellectuals who distanced themselves from government service to take up an existence of Daoist-inspired reflection and heavy drinking in the countryside. Their legendary rebellion has long been depicted in traditional East Asian art and is explored in a companion exhibition at Asia Society, Seven Sages of the Bamboo Grove.

Shot over a period of five years in China, mostly in Shanghai, Seven Intellectuals in a Bamboo Forest is imbued with an avant-garde, film noir aesthetic. Neither time nor location is specified, and scenery is alternately urban and rural. The film depicts the new experience of modernity in China while also illustrating universal themes of isolation and alienation.

"This now seminal work offers a glimpse into the contradictions and uncertainties facing China's urban youth today," said Melissa Chiu, Director of Asia Society Museum and a leading expert on Chinese contemporary art. "Through exhibitions such as Yang Fudong, Asia Society has begun to focus on the historical antecedents for the experimental art movement in China, allowing us to examine in greater depth the evolution and artistic processes behind the creation of an artist's work."

Born in Beijing, Yang Fudong was trained as a painter and graduated from the China Academy of Fine Arts in Hangzhou. In 1998, he moved to Shanghai where, like many artists of his generation, he taught himself both photography and film. He first came to national prominence when his photograph The First Intellectual was removed by the Cultural Inspection Bureau from the controversial 2000 exhibition of experimental art designed to coincide with the first international exhibition of the Shanghai Biennial. This photograph explored the tensions between the traditional role of the intellectual and China's urban transformation, an idea that is further explored in the Seven Intellectuals.

In talking about his inspiration for the work, the artist has said: "In college, I was deeply impressed by the idea of the Seven Sages, or Seven Intellectuals. I felt they were open-minded, free spirited and genuine. They acted based on their emotions. They were idealists and thinkers. Later on when I began to make art, I felt that I wanted to create a series on this subject." Of the film's seven protagonists, he has stated, "Their future is not foreseeable. What they do is based on how they feel. [An] important point is the disparities between real life and utopian life .... How do we act when we face these disparities?"

About Yang Fudong's Seven Intellectuals in a Bamboo Forest

The film is divided into five parts that are shown in five adjacent gallery spaces. Though lacking an explicit dramatic narrative, the film has dialogue (subtitled), music and ambient sound. Allusions to the traditional Seven Sages theme are most evident in Part I (29 min., 22 sec.). At the beginning of the film, the seven characters appear naked. They dress themselves in business attire and begin to wander around a forest in a dreamlike atmosphere. Part II (46 min., 15 sec.) takes place in bustling Shanghai, where the characters are shown mostly in an apartment, eating and drinking and discussing desire, sexuality, life and death. Part III (53 min.) returns to the countryside. It begins with the shocking image of the beheading of an ox. The ox plays a key role in this part of the film as both a sacrificial animal and as a symbolic connection to the land, for which the seven seem to be searching. Set on a desolate island, Part IV (70 min.) is composed of random scenes that depict two incarnations of the seven intellectuals: as rural fisherman hard at work and as a group of travelers wandering in a new locale. In Part V (90 min.), the seven intellectuals return to Shanghai, where they take up banal jobs. They are shown drinking in a banquet hall, and as the scenes take on an increasingly surrealistic tone, the nonsensical seems to be analogized with the nature of urban life.

Originally created in 35mm film, the work has since been transferred to video and was first presented in its entirety in 2007 at the Venice Biennale. This exhibition is the first US museum presentation of all five parts. A book will be published in conjunction with the exhibition including an interview with the artist conducted by Melissa Chiu in Shanghai in 2008, as well as essays exploring the traditional Seven Sages and their prominence in East Asian art. The exhibition is cocurated by Melissa Chiu, Museum Director and Vice President, Global Visual Art Programs, Asia Society; and Miwako Tezuka, Associate Curator, Asia Society.

In conjunction with the Yang Fudong exhibition, Seven Sages of the Bamboo Grove explores the theme of this 3rd-century group of Chinese learned men. During a time of political upheaval, the group distanced themselves from government service, choosing instead to spend time engaged in Daoist-inspired discussions, music, poetry, and heavy drinking. The stuff of legend, they have long been the subject of ink painting and decorative arts in East Asia. The exhibition comprises seven 16th- through 18th-century objects that depict the Seven Sages theme, drawn from private collections. These include an important handscroll by Chinese Ming dynasty artist Chen Hongshou (1599–1652), a masterfully painted monochrome hanging scroll by the 16th-century Japanese artist Seiko, as well as Chinese blue-and white-porcelains and bamboo carving. The exhibition is curated by Adriana Proser, John H. Foster Curator for Traditional Asian Art, Asia Society, with Daisy Yiyou Wang, Asia Society Museum Getty Fellow.

Asia Society identifies and fosters the latest contemporary Asian and Asian American artists and engages new audiences with their work. In the early 1990s, the Society was one of the first American museums to establish an ongoing program of exhibitions devoted to contemporary Asian art and artists. In addition to inventive group shows, Asia Society was the first museum in the United States to give solo shows to now widely recognized Asian artists Montien Boonma, Cai Guo-Qiang, Dinh Q. Le, Yuken Teruya, and Zhang Huan, and was among the first museums to show the works of artists such as Chen Chieh-jen, Subodh Gupta, and Bak Ikeda.

Asia Society is the leading global and pan-Asian organization working to strengthen relationships and promote understanding among the people, leaders and institutions of the United States and Asia. The Society seeks to increase knowledge and enhance dialogue, encourage creative expression, and generate new ideas across the fields of policy, business, education, arts and culture. Founded in 1956 by John D. Rockefeller 3rd, Asia Society is a nonprofit educational institution with offices in Hong Kong, Houston, Los Angeles, Manila, Melbourne, Mumbai, New York, San Francisco, Seoul, Shanghai, and Washington, DC. Through its exhibitions and related public programming, Asia Society provides a forum for the issues and viewpoints reflected in both traditional and contemporary Asian art.