New Art for a New Century 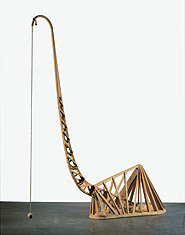 The Newark Museum’s expansive and global approach to contemporary art is highlighted in Unbounded: New Art for a New Century, an enlightening exhibition of works created in the past fifteen years by forty living artists from all corners of the world. The exhibition creates unexpected connections or groupings that transcend traditional divisions based on geography, genre or media. All of the works are from the collection of The Newark Museum, and many are new acquisitions.

Unbounded, opening February 11 and running through August 16, is the first in a series of exhibitions organized to commemorate the Museum’s 2009 centennial. Major project support for Unbounded has been provided by JPMorgan Chase & Co.

Since its founding in 1909, the Newark Museum has been committed to acquiring and exhibiting the work of living artists and has consistently defined contemporary art broadly, considering work across a wide range of media, created by artists throughout the world. The museum’s collections embrace works beyond conventional notions of “fine art,” including contemporary examples of decorative arts, folk art, industrial design and technology-based media. This distinctive approach is at the forefront of the ongoing global debate on the very definition of art, according to Museum Director Mary Sue Price.

Unbounded reflects a dynamic collaboration by curators from four collecting areas of the Museum: Christa Clarke (Arts of Africa), Ulysses Grant Dietz (Decorative Arts), Katherine Anne Paul (Arts of Asia), and Beth Venn (American Art). The unique perspectives of these four curators provides informed commentary about all of the artists represented. The art in Unbounded is diverse in many ways – the artists, the materials used, and the particular messages and modes of presentation. The colors, the textures, the varying scales of production, the distinctive marks and style – all draw us into an exciting glimpse of the nature of art in our own time.

“This collaborative approach to the representation of contemporary art—distinctive among museums—more accurately represents the plurality of artistic centers,“ Price said, “and the many ways of creating and viewing works of art in an increasingly global world.” Unbounded offers a 21st century interpretation of the Museum’s historical commitment, articulated by its founder, John Cotton Dana, to ‘see and feel and respond to the world’s changes’.”

The themes of Unbounded highlight shared artistic concerns and ideas that are interpreted from diverse – but often overlapping – perspectives.

The exhibition’s introductory theme, “Mixed Messages,” includes work by artists who find inspiration in the visual power of language and symbols and their associated, sometimes conflicting, meanings. Tibetan artist Gonkar Gyatso uses images of mass- produced stickers of pop-culture icons in Buddha@Hotmail to form the silhouette of a Buddha, suggesting both the global explosion of Buddhism as well as the tensions between religion and consumerism. In Movement #36, Kwesi Owusu-Ankomah employs symbols from a broad geographic and historic spectrum – from adinkra symbols of his Ghanaian homeland to Chinese ideograms and corporate logos – to comment on their universal roles of communication.

A second theme, “Revisiting History,” presents the work of artists who draw on the past in their creation of something new. With equal amounts of affection and irony, American artist Red Weldon Sandlin’s Behind Quiet Veils of the Blue Willow deconstructs the history of Blue Willow, a late eighteenth-century china pattern developed in England and marketed with a story falsely represented as a Chinese legend.

Unbounded’s final theme, “The Human Condition,” highlights work by artists, such as American Bill Viola, who explore issues of human consciousness and experience. The extreme slow motion used in Viola’s video installation Dissolution—in which a man and woman submerge under water and then reemerge—emphasizes the movements and expressions of the faces as they move from clarity to dissolution of self.

Unbounded is the first of a series of exhibitions expanding the understanding of art that the Museum has scheduled for its Centennial celebration. The Museum has also commissioned four site-specific artists’ projects that will take place throughout the Centennial year.

Public programs, presented as Centennial Conversations, will complement Unbounded: New Art for a New Century on Thursday evenings, March 19 and May 21.

On March 19, from 7 to 8 p.m., Curator Beth Venn will engage in conversation with artists Victor Ekpuk, Dahlia Elsayed, Franco Mondini-Ruiz and Magdalene Odundo in a program entitled Unbounded by Convention. The artists, each of whom is represented in the exhibition, will discuss their works, and address questions raised by public participants. Questions for this program may be posted for discussion by emailing to adultprograms@newarkmuseum.org prior to the evening event.

On May 21 from 7 p.m. to 8 p.m., a panel of experts takes a look at how forces of globalization are reshaping definitions of contemporary art and its representation in the public sphere. Moderated by Curator Christa Clarke, Art Now: Shifting Terrain includes Melissa Chiu, Museum Director and Vice President of Global Art Programs at the Asia Society; Chika Okeke-Agulu, Assistant Professor in the Department of Art & Archaeology, Princeton University, and Lowery Sims, Curator at the Museum of Arts and Design.

The Newark Museum is located at 49 Washington Street in the Downtown/Arts District of Newark, New Jersey, just 3 blocks from NJPAC and 10 miles west of New York City.
The Museum is open all year round: Wednesdays through Fridays, from Noon - 5 p.m.; Saturdays and Sundays, from 10 a.m. – 5 p.m., October 1 – June 30; and Saturdays and Sundays, from Noon – 5 p.m., July 1 – September 30.
Suggested Museum admission: Adults, $10.00; Children, Seniors and Students with valid I.D., $6.00. Members are admitted free.