Featuring works from the 1970s up to the early 2000s, the exhibition includes many works previously not seen in Ireland, including three of Coleman's most celebrated artworks, Charon (MIT Project), Seeing for Oneself and Untitled. The work of Coleman has transformed the role of image and sound in visual art, and redefined our relationship with the artworks we see today in museums and galleries around the world. His influence can be seen in a generation of younger international artists, including Steve McQueen, Douglas Gordon, Tino Sehgal... 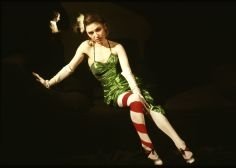 The Irish Museum of Modern Art, in collaboration with the Projects Arts Centre, and the Royal Hibernian Academy, is pleased to announce an important exhibition by the internationally renowned Irish artist James Coleman. Featuring works from the 1970s up to the early 2000s, the exhibition includes many works previously not seen in Ireland, including three of Coleman’s most celebrated artworks, Charon (MIT Project), 1989, Seeing for Oneself, 1987-88 and Untitled, 1998-2002.

Recognised internationally as one of the most important and pioneering contemporary artists, the work of James Coleman over the last forty years has transformed the role of image and sound in visual art, and redefined our relationship with the artworks we see today in museums and galleries around the world. His influence can be seen in a generation of younger international artists, including Steve McQueen, Douglas Gordon, Tino Sehgal, Stan Douglas, and Jeff Wall.

Known for presenting his artworks in the form of audio-visual installations, the viewers of Coleman’s works are free to move around the space and engage in the interpretation and unfolding of the meaning and experience of the artwork, whether the work is a single-slide projection, or a larger scale video or film installation. For example, in Box (ahhareturnabout), 1977, a work widely acknowledged as one of the important artworks of the last thirty years, and on show at the Project Arts Centre, Coleman transforms archival film footage of a famous 1927 boxing match into a complex experience and reflection on the body, identity, and our perception of sound and imagery. As Dot Tuer writes, “the viewer, enveloped in a darkened space, listening to a heightened sound, is no longer a spectator, nor the referee, but a witness to the claustrophobia experienced inside the boxing ring”.

Coleman’s use of technology and new media since the 1970s has been profoundly influential. In the work Charon (MIT Project), 1989, on show at the Royal Hibernian Academy, photography acts as both the medium of presentation (slides), but also as the subject and theme of the 14 short episodes. One of Coleman’s most humorous and engaging works, we see how the everyday practice of taking photographs is transformed into compelling short stories about the ‘behind the scenes’ of photography, and the value and complexity of what we cannot visually see behind a single photograph. A captivating work both visually and narratively, Charon (MIT Project) provides an amusing and stimulating reflection on our image-conscious and celebrity culture.

Coleman’s use of popular culture is also recognised for the way in which his works intertwine ancient mythologies and historical conventions with the most popularised and apparently trivial of artforms. While ‘Charon’ was the ancient Greek god who ferried the dead to the afterlife, in Seeing for Oneself, 1987-88, also on show at the Royal Hibernian Academy, the literary traditions of historical and romantic novels are intertwined with the visual look of teenage ‘photo-stories’ and black and white Gothic films. Set in an eerie-looking château in the mountains, the plot has the drama and tension of a great crime thriller or Agatha Christie novel. As viewers, we become drawn into trying to discover and unravel the secrets and mysteries of this narrated visual story.

In So Different... and Yet, a work completed in 1980, installed by Coleman as a specifically designed outdoor installation at IMMA on a 10-metre wide LED screen (the largest ever mounted in Ireland), the role of language and sound in Coleman’s work is explicitly brought to our attention. Borrowing the literary conventions of romantic novels, mixed with suggestions of vaudeville, Brecht, and piano-bar music, the dynamic quality of the narrative is set in contrast to the apparently static quality of the actor’s poses. Recounting an alleged crime, with the protagonist acting as both subject and objective observer, as viewer we become immersed in trying to decipher if any particular action has taken place, and the significance of the visual clues we are being given. Unlike most films we see in the cinema, we are not provided with supplementary actors or sets, but invited to imagine and piece together the elements of a plot which fundamentally has no clear beginning, middle, or end. The brilliance of Coleman’s work is that it keeps us continually enthralled and fully engaged.

In Ireland, James Coleman remains a figure little known to a wider audience. Yet, internationally, his work is recognised as having had a pioneering influence on contemporary art over the last forty years. This exhibition and collaboration between IMMA, the Project Arts Centre, and the Royal Hibernian Academy, hopes to redress this situation, by offering to Irish audiences a unique opportunity to view works from an artist who has profoundly changed and influenced the way we understand and engage with art today.

James Coleman was born in Ballaghaderreen, Co Roscommon in 1941. Since the 1970s, Coleman has exhibited extensively in international museums and galleries, including more recently the Dia Center for the Arts, New York (1994-95), Kunstmuseum Luzern, Lucerne (1995), Centre Georges Pompidou, Musée national d’art moderne, Paris (1996), Fundació Antoni Tàpies, Barcelona (1999), Lenbachhaus-Kunstbau Städtische Galerie, Munich (2002), Sprengel Museum, Hannover (2002), and Museu do Chiado, Museu Nacional de Arte Contemporânea, Lisbon (2004-05). In 2003, Coleman developed a unique project at the Louvre in Paris for the exhibition Léonard de Vinci: dessins et manuscrits. In 2007, Coleman participated in Documenta 12 in Kassel, premiering his new work Retake with Evidence, 2007. In 2008, Coleman completed the successful showing at IMMA of his trilogy of pioneering works from the 1990s, with the slide installation Background, 1991-94, following the installation of I N I T I A L S, 1993-94, in 2006 and Lapsus Exposure, 1992-94, in 2007. These installations celebrated IMMA’s acquisition of these major works through funding from the Heritage Committee of the National Cultural Institutions in 2004.

The current exhibition is accompanied by a substantial new publication published in association with Thames & Hudson, with new texts by the French philosopher Jacques Rancière, Emeritus Professor of Philosophy at the University of Paris VIII; Jean Fisher, Professor of Fine Art and Transcultural Studies, Middlesex University; Luke Gibbons, Keough Family Chair in Irish Studies, Professor of English, and Concurrent Professor in the Department of Film, Television and Theatre at the University of Notre Dame, and Dorothea von Hantelmann, art historian at the Collaborative Research Centre "Aesthetic Experience and the Dissolution of Artistic Limits" at the Free University Berlin.