Light, Motion, Sound, and the Optical in Art Since 1945 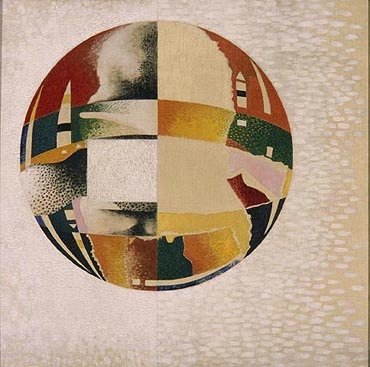 Sensory Overload tracks the development of Kinetic and Op art, whose optical stimulation and interactivity introduced new dimensions to art. Stanley Landsman's Walk-In Infinity Chamber (1968), which has not been on view for nearly fifteen years, together with Erwin Redl's dramatic Matrix XV (2007), a 25 x 50 foot LED installation, punctuate this extraordinary immersive experience.

Chronological in its presentation, the installation begins with works by László Moholy-Nagy and Josef Albers, two Bauhaus instructors whose ideas stimulated the developments of these styles, followed by vibrant early Op art pieces from the 1950s and 1960s by European and American artists such as Victor Vasarely and Richard Anuskiewicz. The development of Albers' ideas into geometric abstraction during the 1970s is visible in the works of artists such as Al Held and Frank Stella, and the works of Peter Halley and Philip Taaffe and those of the so-called post-hypnotic artists such as Bruce Pearson and James Siena show the continuation of the optical tradition in the 1980s and 1990s. Select images, films, and videos will be projected in two black box theaters.

The Museum has collected and exhibited new media art ever since 1967 when it co-organized Light | Motion | Space with the Walker Art Center, one of the first exhibitions on this form of art in the United States. Sensory Overload features some of the most popular works in the Museum's Collection as well as key works on loan from other institutions and private collections.

The Spirit of The Century
At the turn of the twentieth century, artists began using industrial materials and movement (literal and optical) to reflect the mechanical and electrical revolutions that were radically reshaping the modern world. The Italian Futurists and Russian Constructivists advocated that all art be based on speed, movement, and industrial materials, leading to the first kinetic sculpture by Naum Gabo in 1920. Russian émigré László Moholy-Nagy introduced these ideas to the curriculum of the German Bauhaus, declaring the machine “the spirit of this century.” Succeeding Moholy-Nagy in 1928, Josef Albers continued to advance the application of science to art, developing theories using color and geometry to create optical effects.

When the National Socialists forced Bauhaus teachers to expatriate from Germany, the location of this creative ferment was effectively transferred to the United States, where, in 1936, a group of American artists influenced by early Modern European art formed the American Abstract Artists group. Among the founders were Burgoyne Diller and Fritz Glarner, who boasted among their members the recently immigrated Josef Albers.

Le Mouvement
After World War II, the ideas generated at the Bauhaus about abstraction, motion, and color catalyzed an international exploration of Kinetic art. In 1955, Galerie Denise René, Paris, organized the first exhibition of Kinetic art, Le Mouvement, introducing works by Yaacov Agam, Pol Bury, Alexander Calder, Marcel Duchamp, Robert Jacobsen, Jesús-Rafael Soto, Jean Tinguely, and Victor Vasarély. During the late 1950s in Düsseldorf, Germany, Heinz Mack, Otto Piene, and, later, Günther Uecker founded a Europe-wide movement named Group Zero that was against the use of technology for war, and in support of its use in art.

By the 1960s, Kinetic art had spread to the U.S. The Howard Wise Gallery, New York, organized numerous exhibitions between 1960 and 1970. In 1968, the Nelson-Atkins Museum, Kansas City, organized The Magic Theatre, an unprecedented sensory exhibition developed by engineers and artists. Capturing the rising trend, popular theorist Marshal McLuhan looked specifically to artists to transform our postwar nation into a technological culture: “The serious artist is the only person able to encounter technology with impunity, just because he is an expert aware of the changes in sense perception.”

Op Art
After the National Socialists closed the Bauhaus in 1933, László Moholy-Nagy and other Bauhaus instructors fled Nazi Germany and came to the United States, where they spread their art and design theories at schools such as Black Mountain College, Illinois Institute of Design, MIT, and Yale University. As pupils of Josef Albers at Yale, artists Richard Anuskiewicz and Julian Stanczak were informed by the Bauhaus artist’s color theories and developed them into what has become known as Op art. In a 1964 article, Time magazine coined the term “Op art” to describe this new, intense visual art style that had erupted across the Western world and spread from art into fashion and graphic design. American Op artists were particularly influenced by Yaacov Agam, Bridget Riley, and Victor Vasarély to create illusions of motion and volume by employing moiré patterns and shifting images that disrupted the retinal focus and created after-images. Op art preyed upon the fallibility of vision to create the sense of movement. The fashion for this art movement crested in 1965 with a series of important international exhibitions.

The Projected Image
A number of people, including Thomas Edison (the inventor of the light bulb), experimented with various motion picture apparatuses in the mid-1890s. Incorporating such scientific pursuits into an art form, László Moholy-Nagy strove to explore “the new culture of light” in creating his Light-Space Modulator (1930), a kinetic sculpture with an electric motor that projected light. Through the introduction of television, video recorders, and computers, artists gained access to the new media of light, sound, and motion. Artists began to utilize the black box environment of the cinema as a theater for creating immersive artistic experiences that stretched pictorial imagery across physical space. At this time, we see the confluence of art film, theater, and Kinetic art developed into video and installation art, arguably one of the defining artistic genres of contemporary art.

Geometric Abstraction
The extraordinary popularity of Op art spread to fashion and design; yet, the intensity of the visual stimulation exhausted the retinas of a generation and its vogue quickly faded in the late 1960s. Critics began to deride the trend as based simply on visual effects. As a response to the perceived excess of Op art and its predecessor Abstract Expressionism, artists and critics sought to reduce art to simple geometric forms and pure, brilliant color. In 1964, critic Clement Greenberg curated an exhibition titled Post Painterly Abstraction, in which he endeavored to define a formal theory for the evolution of painting from the gesture of Abstract Expressionism to a hard-edged abstraction that created an “optical” effect. Beginning in the 1950s, artists developed Color Field painting, geometric abstraction, and, eventually, Minimal art based on these principles. Painters Gene Davis, Al Held, and Frank Stella created differing visions of art concerned with the direct experience of color and form. Frank Stella famously proclaimed: “What you see is what you see.”

Touch of the Hand, Click of the Mouse
Kinetic art, geometric abstraction, Op art, and the projected image still influence artists working today. Technological advances over the past twenty-five years, from the personal computer to wireless communications to digital editing and imaging in video, have provided artists with new tools. Artists responding to these new technologies continue to adopt the visionary ideas of the Bauhaus, adapting them for the twenty-first century. Josiah McElheny employs the Walk-In Infinity Chamber technology to present his finely crafted versions of 1950s modern design in a reflective box that suggests the melding of past and future in a continuous space.

As our world becomes ever more based in the flat digital screens of televisions, computers, and cell phones, people increasingly crave the human hand in art and artwork that creates a pure sensation. Critic Dave Hickey prophesized that, “the issue of the nineties will be beauty” (1993). Indeed, a new generation of artists such as Michelle Grabner, Bruce Pearson, and James Siena has made works characterized by their sensuousness— rich in color and intense with pattern. These artists emulate the stimulating visual quality of Op art in the sixties, while maintaining conceptual foundations that reference advertising, architecture, and scientific systems, to create what one curator coined as “post-hypnotic.”

Contemporary Video Projections
From television to movies, the moving image is the medium that has helped define and shape our culture. Today’s computerized formats in film, video, and light projections have evolved dramatically from their original models, and as in the past, artists have adapted to these technological advances. From stop animation to digitally manipulated effects, the infinite potential of this medium has been unleashed. Techniques such as collage have translated to video, as demonstrated in the Museum’s 2005 exhibition CUT: Film as Found Object in Contemporary Video. Within the show, editing techniques were likened to physical properties such as to stretch, to remove, to match, and to arrange. For the duration of Sensory Overload, the Museum will rotate contemporary videos from its Collection and works on loan. The range of subjects and approaches to the medium will speak to the techniques of CUT, among others.