Photography's Image of the American West. The exhibition examines how photography has pictured the idea of the American West from 1850 to the present. Photography's development coincided with the exploration and the settlement of the West, and their simultaneous rise resulted in a complex association that has shaped the perception of the West's physical and social landscape to this day. Organized thematically rather than chronologically, the display brings together the work of over 70 photographers, including Robert Adams, John Baldessari, Dorothea Lange, Timothy O'Sullivan, Cindy Sherman, Joel Sternfeld, Carleton E. Watkins, and Edward Weston, among others. 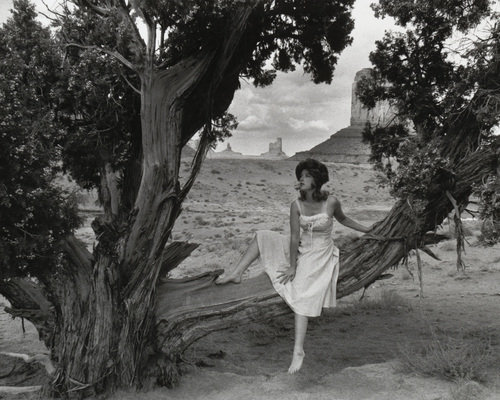 The Museum of Modern Art presents Into the Sunset: Photography’s Image of the American West, a survey of over 150 photographic works dating from 1850 to 2008 that chart the West’s complex, rich, and often compelling mythology via photography. The exploration of a large part of the American West in the mid-nineteenth century by European Americans coincided with the advent of photography, and photography and the West came of age together. The region’s seemingly infinite bounty and endless potential symbolized America as a whole, and photography, with its ability to construct persuasive and seductive images, was the perfect medium with which to forge a national identity. This relationship has resulted in a complex association that shapes the perception of the West’s social and physical landscape to this day. With political, cultural, and social attitudes constantly shifting in the region over the last 150 years, Into the Sunset further examines the way photographers have responded to these changes. The exhibition is organized by Eva Respini, Associate Curator, Department of Photography, The Museum of Modern Art, and is on view in the Special Exhibitions Gallery on the third floor from March 29 to June 8, 2009. In conjunction with the exhibition, a series of film exhibitions thematically linked by cinema’s century-long preoccupation with the American West will be screened in the Roy and Niuta Titus Theaters. The first of these related exhibitions, The Old West: Myth, Character, and Reinvention, will run from April 1 to May 1, 2009, and is organized by Anne Morra, Assistant Curator, Department of Film. Additional film exhibitions to be announced; please visit MoMA.org for details.

Organized thematically rather than chronologically, Into the Sunset brings together the work of over 70 photographers, including Robert Adams, John Baldessari, Dorothea Lange, Timothy O’Sullivan, Cindy Sherman, Joel Sternfeld, Carleton E. Watkins, and Edward Weston, among others. The exhibition draws extensively from MoMA’s collection, along with private and public collections in the United States, and features new acquisitions from Adam Bartos, Katy Grannan, and Dennis Hopper, with each work also on view for the first time at the Museum. Ms. Respini states: “Ranging from grand depictions of paradise to industrial development, from pictures taken on the road to prosaic suburban scenes, the photographs included in Into the Sunset do not all picture the West from the same point of view, or even perhaps, picture the same West. Rather, each is one part in a continually shifting and evolving composite image of a region that has itself been growing and changing since the opening of the frontier.”

Into the Sunset begins with the birth of photography and the American West. In the mid-nineteenth century, the region’s seemingly infinite bounty and endless potential symbolized America as a whole, and Carleton E. Watkins (American, 1829-1916) captured the grand depictions of an American paradise in his photographs of Yosemite Valley in California. Arguably the world’s first renowned landscape photographer, Watkins made his first photographs there in 1861—large sized prints made with an 18-by-22-inch mammoth plate camera, well suited to the grandeur of the land. Included are the three contiguous photographs that make up his extraordinarily detailed View from the Sentinel Dome (1865-66). The exhibition balances the early work of landscape photographers with the twentieth-century focus on the failure of the West’s promised bounty. In Joel Sternfeld’s (American, b. 1944) After a Flash Flood, Rancho Mirage, California (1979), the photographer documents the impact of a natural disaster, specifically a landslide, shot with neutral tones softly camouflaging the extent of flash flood on this suburban neighborhood. And in Karin Apollonia Müller’s (German, b. 1963) Civitas (1997), the photographer shows a very different view of California than that of Watkins, with Müller revealing a contemporary Los Angeles as a littered wasteland of freeways and anonymous glass towers.

As highways and interstate travel became more prevalent, the automobile and the open road became synonymous with the region, with Edward Weston (American, 1886-1958) as the first great photographer of these open roads. Included is Weston’s iconic Hot Coffee, Mojave Desert (1937), a humorous black-and-white photograph of a roadsign revealing a greater thematic shift to the highway and its signage as an inescapable element in picturing the West in the twentieth century. Once the West became more populated, photographers began to showcase humans’ effects on the land, including images of industrial development. In the 1950s William Garnett (American, 1916-2006) was hired by a real estate company to record the efficiency of mass-produced housing. For this series, Lakewood, California (1950), Garnett took photographs of the neighborhood from an airplane, resulting in images that are completely devoid of people and focus on the progress of mass-produced construction. However, the series subsequently came to represent all that was wrong with such development and the massive sprawl of the West in the eyes of its critics.

Photographs of the people of the West represent a diversity of archetypes: gold miners and loggers, Native Americans, cowboys, suburbanites, city dwellers, starlets, dreamers, and drifters. Into the Sunset explores these archetypes, and their mutability into the twenty-first century. Included is Half Indian/Half Mexican (1991), from the photographer James Luna (Native American, Pooyukitchum/Luiseno, b. 1950), an artist of Native American ancestry. This tongue-in-cheek self-portrait captures in profile both an identity photograph and a mug shot, and works as a counterpoint to the tokenized portrayals of Native Americans from the past 150 years. A similar reevaluation of past archetypes occurs in Richard Prince’s (American, b. 1949) “Cowboy” series from 1980, with one work from the series included in the exhibition. For that series Prince famously photographed Marlboro advertisements, cutting out the text, cropping the images, and enlarging them, highlighting the artifice of the virile image of the cowboy and its potency as a deeply ingrained figure in American mythology. The suburbs and their inhabitants have been a rich subject for photographers of the West, and included are Larry Sultan’s (American, b. 1946) “Film Stills from the Sultan Family Home Movies” (1943-1972), in which Sultan chose individual frames from his family’s home movies and enlarged them. Although the images feature the activities that epitomize suburban life, a sense of unease lurks beneath the surface of these images; cropped and grainy, they resemble surveillance or evidence photographs. Into the Sunset concludes with the theme of the failed promise of Western migration. Dorothea Lange’s well-known 1936 photograph Migrant Mother, Nipomo, California, photographed when Lange was employed by the Farm Security Administration, is included and documents the conditions of the West in rural areas during the Great Depression. Her photographs had a humanist purpose and resulted in putting a face on the hardships of that era.

This tradition of capturing the downtrodden of the West continues into this century with Katy Grannan (American, b. 1969), a photographer who recently completed a series of new pioneers, individuals struggling to define themselves in the West of today. In Nicole, Crissy Field Parking Lot (I) (2006), a woman, “Nicole,” poses seductively on a gravel parking lot, with her makeup-streaked face and harsh light alluding to her perilous existence on the fringe of society.

SPONSORSHIP: The exhibition is supported in part by the Sue and Edgar Wachenheim Foundation.

FILM PROGRAMS: A series of film exhibitions will be screened in The Roy and Niuta Titus Theaters in conjunction with the exhibition. The first in the series, The Old West: Myth, Character, and Reinvention, will run from April 1 to May 1, 2009. This exhibition presents a fascinating selection of films, spanning 1894 to 1995, that represent the myth of the Old West, America’s unofficial national epic. The films in this exhibition demonstrate how cinematic representations of the Old West both create and adapt to our national mythology, and how cinema—specifically Hollywood, that ultimate destination in the new American West—glorifies this reinvention. All films in this series are from the U.S. The program is organized by Anne Morra, Assistant Curator, Department of Film.