The Beauty of a Fragile World (1910 - 1914). Franz Marc, August Macke and Robert Delaunay: paintings and works on paper; the exhibition depicts the stimulating interaction between these three artists from Germany and France prior to the war. Franz Marc and August Macke, who were killed in World War I, produced their main Expressionist works during the four years they had in common. Robert Delaunay drafted the basis of his future work at that time. Contemporary on show a film by Harun Farocki: Not without risk. 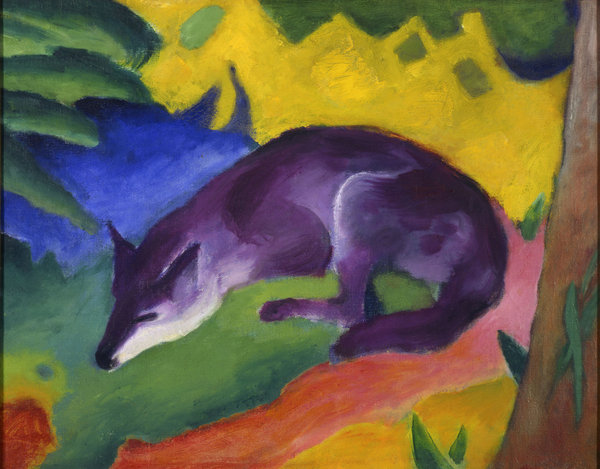 Exhibition curator: Dr. Susanne Meyer-Büser
Head of the department of painting and sculpture at the Sprengel Museum Hannover

Franz Marc, August Macke und Robert Delaunay: In a unique gathering of extraordinary paintings
and works on paper, the exhibition depicts the stimulating interaction between these three artists
from Germany and France.

The exhibition focuses on a brief but intense phase in the lives of the three artists prior to World War
One and traces the various stages of the impact they had on each others’ works. Franz Marc,
(1880 - 1916) and August Macke (1887 - 1914), who were killed in World War I, produced their main
Expressionist works during the four years they had in common. Robert Delaunay (1885 - 1941)
drafted the basis of his future work at that time.

Although their personal relationships differed in intensity because they moved about much, had only
limited financial means for travel, had to overcome language barriers and the level of mutual empa-
thy also fluctuated, all three artists were united by one common theme, namely that of light, its frag-
mentation and its concomitant energizing and heightening of colour. With complementary and simul-
taneous colour contrasts of ever increasing subtlety, they produced works that activated the viewer’s
eye through their sheer vitality and vibrancy. And whilst each of the three artists held the works of the
others in high esteem, they all developed their own individual approach and style.

Robert Delaunay was the central source of inspiration for Franz Marc und August Macke, whereby
the three artists amazingly only met twice personally. Their first encounter was in Paris where Marc
and Macke visited their colleague in his studio on 2 October 1912. Delaunay showed them his
Fenêtres, the window Pictures in which he occupied himself with the phenomenon of coloured facet-
ing (Orphism). Using the motif of light-refracting windowpanes, he explored the tension and relaxa-
tion of dissonant and consonant in addition to complementary and non-complementary colours. Marc
und Macke were so enthusiastic about the fragmented forms that they immediately experimented
with it in all of their new works made after returning to Germany.

The second and final encounter took place in Berlin on 20 September 1913 on the occasion of the
opening of the First German Fall Salon at the gallery Der Sturm. Delaunay was represented in the
exhibition with 21 pieces, including 13 Formes Circulaires, works in which coloured circles are ar-
ranged in geometric planar structures. These spectacular, completely abstract circular formations
also inspired Marc and Macke to produce new compositional forms based on the circle. They also
now risked the step towards total abstraction for the first time.

The exchange of ideas and influences between these three protagonists would not have come
about, nor could it have thrived so well, without the kind help and support of numerous friends, acquaintances, critics and collectors who not only mediated between the artists’ different approaches,
but also between different countries and languages. Most worthy of mention is Sonia Delaunay, who
by dint of her origins knew no cultural or language barriers. She not only cultivated a multitude of
contacts, but was also a recognized artist in her own right. But there were others, too, not least Paul
Klee, Wassily Kandinsky as well as collectors such as Bernhard Koehler. A part of the exhibition will
be devoted to these intermediaries and to certain forerunners like Umberto Boccioni. Selected works
by these artists will be flanked by pioneering early works of the three protagonists dating from the
time between 1905 and 1910.

The exhibition comprising about 90 paintings as well as 100 watercolours and drawings will be accompanied by a comprehensive and profusely illustrated catalogue published by Dumont.

The exhibition is under the high patronage of Horst Köhler, President of the Federal Republic
of Germany.

Harun Farocki (born in 1944) has, ever since he was a student at the Deutsche Film-und Fernsehakademie Berlin (DFFB) in the 1960s, realised political documentary films. His oeuvre encompasses more than 90 films all together, including features, essay films and documentaries.

Farocki's work relays a sense of analytical precision through his nearly unbelievable confidence in the power of audio-visual evidence ‘case facts’ and ‘records of circumstances’, which is then used as material. The cinematic eye exposes structures neutrally, without being polemic; what remains are structures, interesting details and the impact these have on the audience.

NICHT OHNE RISIKO deals with ‘venture capital, risk capital which usually involves high risks, high profits and maximum profits’ (quote Jutta Krug). The camera follows two rounds of negotiations between representatives of a company, NCTE, which manufactures an apparently innovative torque sensor, and a negotiator for the investors, Buchanan Industrial Technologies. With nearly clinical reserve, the viewer's attention is drawn to the rhetoric used by both sides: argumentation, opposing beliefs and the specific mechanisms of that field.