Saul Becker exhibits for the first time his electroplated plants, creating idealized fields of flora from un-idealized sources; in collaboration with sound artist and composer Stephen Vitiello. The gallery installation of Ilana Halperin serves as a prologue presenting petrified narratives alongside a cave cast model - a kind of geological alert. Through the composition and collage of images borrowed from news and world media into patterns for domestic interiors, Francesco Simeti instigates social commentary and political tension. 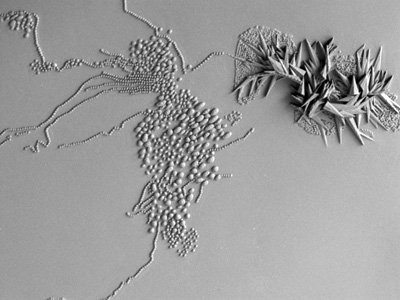 Saul Becker: Nature Preserves
Saul Becker has spent the last two years collecting weeds near his home in industrial Brooklyn. From unlikely sites – gas stations, polluted Newtown Creek, corner vacant lots – Becker finds the most hearty of natural specimens in disregarded and unnatural sites. By developing a system of electroplating each plant sample, he archives what is overlooked, undocumented, and generally stepped on or built over. At Artists Space, Becker will exhibit for the first time his electroplated plants, creating idealized fields of flora from un-idealized sources. In collaboration with sound artist and composer Stephen Vitiello, Becker’s plant specimens incorporate sound, echoing their Brooklyn homes. These objects, long used as a reference for Becker’s landscape paintings of industrial sites, are preserved and unlikely objects of beauty. Fierce underdogs of our city’s industrial past and present, the work reminds us that nature is always just below (or creeping above) the surface.
Saul Becker (b. 1975, Tacoma, WA) lives and works in Brooklyn, NY. He received an MFA from Virginia Commonwealth University, Richmond, VA and a BFA from Nova Scotia College of Art and Design (NSCAD) Halifax, NS. He is represented by Sunday L.E.S. in NYC, and his work has been featured recently in solo exhibitions at Volta NY and Sunday L.E.S. along with exhibitions at Platform Gallery, Seattle, WA, Reynolds Gallery, Richmond, VA, The Lab Gallery, NY and the Tacoma Art Museum, Tacoma, WA, among others. He was the recipient of the prestigious Virginia Museum of Fine Art Fellowship as well as a residency at The Bemis Center for Contemporary Art in Omaha, NE.

Ilana Halperin: Physical Geology (slow time)
Ilana Halperin’s work explores an impulse to make physical contact with geological time. While conducting research in the geology department at the Manchester Museum, Halperin discovered a fine collection of lava medallions from Mount Vesuvius—magma pressed between forged steel plates to form an imprint (imagine a waffle iron that makes use of lava instead of pancake batter.) During her research, she also came across a small stone relief sculpture that appeared to be carved out of pure white alabaster. The object was in fact a limestone cast created via the same process that forms stalactites in a cave—the residue of a high velocity calcifying process. These findings have led Halperin to contemplate the notion of physical geological time—fast moving lava flows vs. slow time inside a cave. Halperin’s overarching project is to make a geological time diptych involving new lava medallions and cave casts, allowing slow and fast time to hover alongside each other.
The Artists Space exhibition will focus on the cave casting component of Halperin’s research. As these objects take one and a half years to become pure geology, the gallery installation will serve as a prologue presenting petrified narratives alongside a cave cast model—a kind of geological alert.
Ilana Halperin (b. 1973, New York, NY) lives and works between Glasgow and New York. She received an MFA from The Glasgow School of Art, Glasgow, Scotland and a BA with Honours from Brown University, Providence, RI. Previous solo exhibitions include Physical Geology (part one) at the Manchester Museum and Nomadic Landmass at doggerfisher in Edinburgh. Her work has also been featured in numerous group exhibitions including Polar Dispatches at the Portland Museum of Art, Portland, ME; Estratos, PAC Murcia, Spain and Experimental Geography, iCI (Independent Curators International,) currently touring.

Francesco Simeti: Volatili
For over a decade Francesco Simeti has disrupted the decorative history of wallpaper. Through the composition and collage of images borrowed from news and world media into patterns for domestic interiors, Simeti instigates social commentary and political tension. For his most recent project he has collaborated with nine patients in a long-term care facility for the mentally disabled. Located in San Colombano (northern Italy), Simeti’s collaboration is the fourth of an ongoing series of residencies called “Acrobazie” (Acrobatics). After months of experimentation with the group, Simeti introduced his ongoing interest in the work of American orinthologist John James Audubon, whose paintings and 435 life-size prints in “Birds of America” have become an iconic treasure for naturalists. As a symbol of freedom and mobility, birds have a particularly deep resonance for the patients who suffer a feeling of homelessness and instability due to periodic uprooting and transfer by the Italian government. The final wallpaper is a compilation of their drawings inspired by Audubon’s work and assembled by Simeti. The wallpaper is presented with the individual work of the patients, framed and mounted on a papered wall.
Francesco Simeti (b. 1968, Palermo, Italy) lives and works in New York. His work has been exhibited internationally including solo exhibitions at FrancescoPantaleoneArteContemporanea, Palermo, Italy and Francesca Minini Gallery, Milan, Italy. Selected group exhibitions include XV Quadriennale, Rome Italy, Love/Sex/War, Exit Art, New York, and Framing Exposure: Process and Politics, Institute of Contemporary Art, Philadelphia, PA.