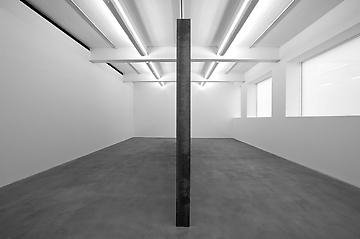 Gagosian Gallery is pleased to announce an exhibition of five new monumental paintings by Cy Twombly.

Each painting comprises four wood panels on which three roses in full bloom are depicted in pulsating colours, ranging from deepest burgundy to tangerine, gold, violet and crimson, set against a background of vibrant turquoise. Inscribed on the last panel of each painting are fragments from Rilke's poem cycle "The Roses." Stanzas scrawled in a gestural mode reflect Twombly's characteristic conflation of painting and poetry, image and word, while his brushwork describes petals bursting open, together with words that hint and evoke. He allows the paint to flow down the panels so that liquidity and gravity interact, asserting the vertical passage of the medium over the broad horizontality of the support.

Some aspects of Twombly's new works recall his earlier cycle of paintings, Analysis of the Rose as Sentimental Despair (1985), now in The Menil Collection, Houston, which also referred to quotations by Rilke, as well as Rumi and Giacomo Leopardi, embracing conceptions of nature dominated by its inevitable demise. Twombly's ardent, bold, and often flamboyant use of colour has other affinities -- with Warhol's Flower series, for example, or Matisse's late paper cut-outs. But just as the rose recurs throughout Rilke's work as a memento mori, so does Twombly employ the motifs and conditions of the natural world to allude to the pleasure and transience of life.

Cy Twombly was born in 1928 in Lexington, VA. He has exhibited his work extensively since the mid 1960s and it is collected by public and private institutions the world over. Major recent exhibitions include a retrospective at Tate Modern, a variant of which is currently on view at the Guggenheim Museum, Bilbao, and will travel to the Galleria Nazionale d'Arte Moderna, Rome later this year. Another survey of recent work will inaugurate the new building of The Art Institute of Chicago in May 2009. Twombly lives and works in Gaeta, Italy and Lexington, VA.

The exhibition will be accompanied by a fully illustrated catalogue with an essay by Jonathan Jones.

The sculpture Fernando Pessoa (2007-08) is on view at the Britannia street Gallery, following Gagosian Gallery's presentation of two concurrent exhibitions of new work by Richard Serra in the fall 2008, which were Serra's first exhibitions in London since Weight and Measure was presented in the Duveen Galleries at the Tate Gallery in 1992.

Born in 1939, Richard Serra is one of the most significant artists of his generation. His groundbreaking sculpture explores the exchange between artwork, site, and viewer. He has produced unparalleled large-scale, site-specific sculptures for architectural, urban and landscape settings. In the summer of 2008, he conceived Promenade, a course of five steel sculptural elements towering seventeen metres, for MONUMENTA at the Grand Palais in Paris.

Other recent projects include the eight-part permanent installation The Matter of Time at the Guggenheim Bilbao (2005) and a survey exhibition at The Museum of Modern Art (2007). Work comes out of work, an exhibition of works on paper 1989-2008, was presented last yeat at the Kunsthaus Bregenz, Austria.

The exhibition is accompanied by a fully illustrated catalogue with an essay by Kate Nesin.
For further information please contact the london gallery on 44.207.841.9960.