It's not for reading. It's for making 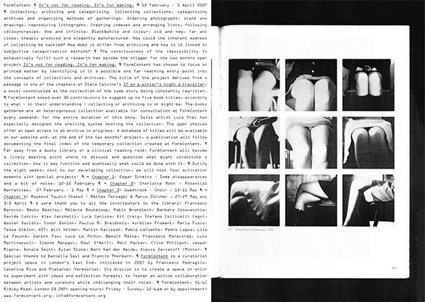 Collecting, archiving and categorising. Collecting collections, categorising archives and organising methods of gatherings. Ordering photographs, scans and drawings, reproducing lithographs. Creating indexes and arranging lists, following idiosyncrasies. One and infinite. Black & white and colour, old and new, far and close, cheaply produced and elegantly manufactured. How could the inherent madness of collecting be tackled? How does it differ from archiving and how is it linked to subjective categorisation methods?
The consciousness of the impossibility to exhaustively fulfil such research has become the trigger for the two month open project “It’s not for reading. It’s for making.”

FormContent has chosen to focus just on printed matter by identifying in it a possible and far reaching entry point on the concepts of collections and archives. The title of the project comes from a passage in one of the chapters of Italo Calvino’s If on a winter’s night a traveler , a novel constructed as the collection of the same story being constantly rewritten.

FormContent asked over 30 contributors to suggest up to five book titles, according to what collecting or archiving is or might be to their understanding. The books gathered are an heterogeneous collection available for consultation at FormContent every weekend for the entire duration of the show. Swiss artist Luca Frei has especially designed the shelving system that hosts the collection, the open shelves offer open access to an archive in progress. A database of titles will be available on our website and, at the end of the two month project, a publication will follow documenting the final index of the temporary collection created at FormContent.

Far from a dusty library or a clinical reading room, FormContent will become a lively meeting point to discuss and question what might constitute a collection, how it may function and eventually what could be done with it. During the eight weeks, in addition to our developing collection, we will host four activation moments with special projects by:

• Chapter 1: Edgar Schmitz – Some disappearances and a bit of noise
12–15 February

A warm thank you to our contributors:

Special thanks to Daniella Saul and Francis Thorburn.