Four Greeneries. The work of De Cordier consists of paintings, sculpture and drawings. Piece-by-piece they capture and transfix the attention of the spectator. His sculptures depict semi-human figures or primitive buildings, within which he evokes a basic shelter. 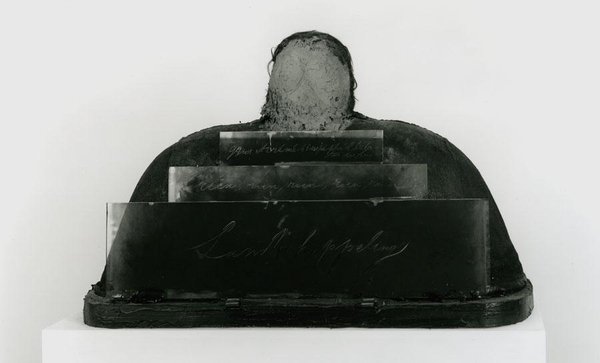 The Belgian artist Thierry De Cordier (°1954) is one of the most striking artists of his generation. In his 1988 performance Discours au monde, he proclaimed that he ‘had absolutely nothing to do with the twentieth century’. With this gesture, the artist severed all ties with the artistic discourse of his time and instead resolved to reflect alone on himself and his immediate surroundings. This personal exploration lies at the centre of his dialogue with the spectator.

The work of De Cordier consists of paintings, sculpture and drawings. Piece-by-piece they capture and transfix the attention of the spectator. His sculptures depict semi-human figures or primitive buildings, within which he evokes a basic shelter. The ‘I’ seeking protection forms a permanent theme in his work. De Cordier employs the recluse and the mystic as his characters and uses them, not without irony, as a model for contemporary artistic practice. This can be seen in the artist’s sculpture Lijdensvanger (Attrappesouffrance, 1988), made for an exhibition in the village of Puycelsi, in the South of France. The human-size figure, half man, half bird, is reminiscent of a pillory or crucifixion. The sculpture contains a dramatic sense of isolation and exclusion. It is revealing that the inhabitants of Puycelsi reacted with extreme hostility towards this work. In the middle of the night, it was thrown over the city walls and destroyed.

Thierry De Cordier’s paintings and drawings expose in a masterly fashion the ‘I’ of a person turned in upon himself. The dark colours and grey tints evoke indecisiveness and spiritualization. The images are removed from contemporary culture and are only meaningful within De Cordier’s personal mythology. Thus seascapes and landscapes are created from the word play mer-mère-terre, or the form of a pear (Dieu est une poire) from peer-père-poire. The images can resituate themselves; they draw upon origins beyond language and culture. Above all, a powerful emotional intensity emanates from each and every drawing and painting. The work of Thierry De Cordier can be laboriously read and explored by the spectator. It represents a stubborn mental landscape that the artist has gradually developed over time. Each work is the result of original thought processes and soul-searching and only finds meaning in the light of the complete oeuvre of the artist, and his artistic move away from the world.