Selections from The Judith Rothschild Foundation Contemporary Drawings Collection. The exhibition that features 300 works by over 150 artists and shows the various methods and materials within the styles of gestural and geometric abstraction, representation and figuration, and systems-based and conceptual drawings. Brought together are historical works by Lee Bontecou and Joseph Beuys, Minimalist and Conceptual works by Dan Flavin, Donald Judd, and Hanne Darboven, detailed narrative drawings by Elizabeth Peyton and John Currin, collages by Amelie von Wulffen, Mona Hatoum, and other works. 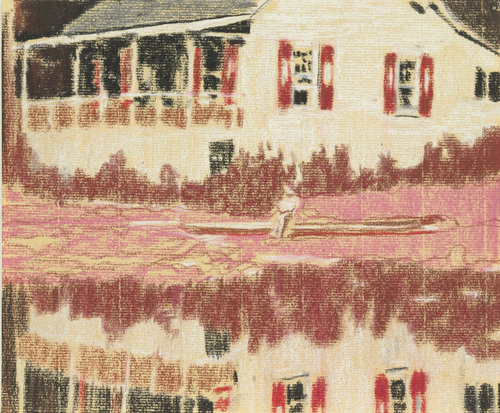 The Museum of Modern Art presents Compass in Hand: Selections from The Judith Rothschild Foundation Contemporary Drawings Collection, an exhibition that features 300 works by over 150 artists from this collection. This exhibition, the largest drawings exhibition ever mounted at MoMA, features selections from the donation of approximately 2,500 works on paper by more than 650 artists that entered the Museum’s collection in 2005. The exhibition surveys the collection for the first time and shows the various methods and materials within the styles of gestural and geometric abstraction, representation and figuration, and systems-based and conceptual drawings. Brought together are historical works by Lee Bontecou and Joseph Beuys, Minimalist and Conceptual works by Dan Flavin, Donald Judd, and Hanne Darboven, detailed narrative drawings by Elizabeth Peyton and John Currin, collages by Amelie von Wulffen, Mona Hatoum, and Lucy McKenzie and Paulina Olowska, and large-scale installations by Nate Lowman and Ján Mančuška. Compass in Hand is organized by Christian Rattemeyer, The Harvey S. Shipley Miller Associate Curator of Drawings, with Connie Butler, The Robert Lehman Foundation Chief Curator of Drawings, The Museum of Modern Art. It will be on view in the Museum’s second floor Contemporary Galleries from April 22 to July 27, 2009. This exhibition, one of a series highlighting the Museum's contemporary collection, is made possible by The Bank of New York Mellon.

The Judith Rothschild Foundation Collection of Contemporary Drawings, the largest gift ever made to the Museum’s Department of Drawings, was assembled over a two-year period and ranges from the 1930s to 2005 with a heavy focus on contemporary practice. The collection was formed by the Foundation’s sole trustee, Harvey S. Shipley Miller, who is also a MoMA trustee, in consultation with Gary Garrels, who was MoMA's Chief Curator of Drawings and Curator of Painting and Sculpture from 2000 to 2005. Compass in Hand follows in the steps of a number of important exhibitions dedicated to drawing at MoMA, in particular Drawing Now, Bernice Rose’s 1976 exhibition, and Drawing Now: Eight Propositions, an exhibition held in 2002 organized by Laura Hoptman.

Both exhibitions were contemporary evaluations guided by the dramatic changes observed at the time by the curators, and each focused on periods of great innovation, importance, and prosperity for drawing. For the 1976 exhibition, Rose focused on process-oriented, Minimal, and Conceptual works, while Hoptman’s 2002 exhibition saw a return to narrative and figuration. These two exhibitions have had a direct and palpable impact on the conversation about drawing as well as on the shape of The Judith Rothschild Foundation Contemporary Drawings Collection.

Mr. Rattemeyer states, ―This exhibition speaks first and foremost to the vitality of drawing today, documenting a resurgence of the medium’s importance to contemporary art practice over the past two decades. The recent work in the exhibition suggests a new approach to working on paper, or rather with paper as a reconfigured material, with assemblage techniques assuming a major role. To understand this recent activity, certain historical trajectories were established: one through figurative works, and the other through abstract, minimal, and conceptual works. Compass in Hand is laid out along this dual trajectory, with each path following a rough chronology from the 1950s to the present. The central galleries of the exhibition explore the most current tendencies in drawings today. The galleries are organized by time periods, artistic movements, and geographic locations, the principles on which the collection was generally based, and features contemporary works by artists including Kai Althoff, Peter Doig, Marcel Dzama, Mark Grotjahn, Charline von Heyl, Christian Holstad, Roni Horn, Jasper Johns, Nick Mauss, Paul McCarthy, Jennifer Pastor, Kara Walker, and Andrea Zittel. An exceptional selection of Minimal and Conceptual drawings from the 1960s and 1970s by artists including Jo Baer, Bridget Riley, and Fred Sandback, and works by significant outsider artists such as Henry Darger, James Castle, and Pearl Blauvelt, form thematic groupings of historic abstraction and figuration, respectively, addressing both sides of the exhibition’s focus.

Selectively pairing works by artists from similar geographic centers—such as New York, Los Angeles, Great Britain (with London and Glasgow as the centers), and Germany (with Berlin as the current center, and Cologne and Düsseldorf as historically significant cities)—or different generations—comparing, for instance, the work of the young American artist Elizabeth Peyton to that of David Hockey—the exhibition suggests genealogies and influences, highlighting the ways in which certain basic genres and methods have endured over time. The title, Compass in Hand, refers to the exhibition’s ambition for geographical exploration and discovery (the navigational compass) and its attention to modes of making (the compass as a drafting tool). Compass in Hand also addresses the ever-shifting role of drawing between the sketch and finished object and introduces a wide range of material practices, from pencil drawings to vividly colored paintings on paper, from experimentation grounded in innovative processes and materials to collage and appropriation practices that do away with the hand of the artist entirely. Bringing together works by over 150 artists, the exhibition contrasts masterworks with more surprising and unexpected works by lesser known and emerging artists.

The works in the contemporary portion of the exhibition heavily feature the strategies of appropriation, citation, collage, and montage. Assemblage exists as a practice parallel with other forms of production and serves as an experimental arena in which an artist can negotiate an increasingly mediated outside world. Technological reproduction and the free circulation of images have become basic working conditions, and for many artists, entering into a dialogue with the surrounding world means aligning with image streams and the flow of information. The exhibition features many works that are emblematic of this expanded definition of drawing. The works of New York–based artist Kelley Walker (American, b. 1969) contain newspaper photographs and references to art history, as in Black Star Press: Black Star, Black Star Press, Star (2004), and they make conscious use of the role of these sources as secondary images. Walker commonly draws on his sources with coloring agents, such as toothpaste, mouthwash, and other artificially, brightly colored and readily available consumer products, and then he scans the result into a computer; often, the end result is a digital file that can be further reworked and reconfigured, as in the work nine disasters (Florida City; Maui; Moran; San Fernando Valley; Anchorage; Kobe; Elba; Los Angeles; TWA Flight 800) (2002). Christian Holstad (American, b. 1972), another New York–based artist, also employs newsprint, magazines, and other widely distributed printed products, selectively erasing parts of photographs and in the process radically altering the appearance of the original, as in Mt. Rushmore (2003).

The incorporation of appropriated materials into drawings has also significantly expanded the medium’s spatial boundaries, resulting in installation arrangements of works on paper, as in Nate Lowman’s (American, b. 1979) Untitled (History of the SUV – No Blond Jokes) (2003). The work fills a wall with modified images and text from articles about Lizzie Grubman, a New York publicist and socialite who drove her car into a crowd outside a nightclub on Long Island in 2001. With this collection of poster-sized news clippings, some pinned to the wall and others laminated on foam core, Lowman pushes the definition of drawing well into the sphere of sculpture and installation. The exhibition also features an impressive selection of works by Isa Genzken, Richard Hawkins, Martin Kippenberger, Jeff Koons, Sherrie Levine, Paul McCarthy, Cady Noland, Marcel Odenbach, Jack Pierson, Franz West, and David Wojnarowicz—artists who are seen as predecessors for this recent generation of artists working in collage and assemblage, many of whom were active in the late 1970s and 1980s. Collage and assemblage have not entirely supplanted the more traditional forms of drawing, but they have expanded the perception of what a drawing can be, dramatically altering the notion of mark making and image making, of autographic and ideational procedures.

This exhibition, one of a series highlighting the Museum's contemporary collection, is made possible by The Bank of New York Mellon.

ABOUT THE CURATORS:
Christian Rattemeyer, The Harvey S. Shipley Miller Associate Curator of Drawings, joined MoMA in 2007. For MoMA he has organized Lines, Grids, Stains, Words (2007). Connie Butler joined MoMA in 2006 as The Robert Lehman Foundation Chief Curator of Drawings. For MoMA she has organized Marlene Dumas: Measuring Your Own Grave (2008); Here is Every. Four Decades of Contemporary Art (2008); Glossolalia: Languages of Drawing (2008); Pipe, Glass, Bottle of Rum: The Art of Appropriation (2008); and Live/Work: Performance into Drawing (2007). She is currently working on Projects 91: Artur Zmijewski, which will open in September 2009.