The clearing. "I find lenticular imaging a fascinating medium. Imagery appears unstable behind the lenticular lens and its non-static nature acts like the indecision within Wallace Stevens' poem. Lenticular images create an optical three-dimensional effect and/or flow of motion within an image..." (Sarah Ryan) 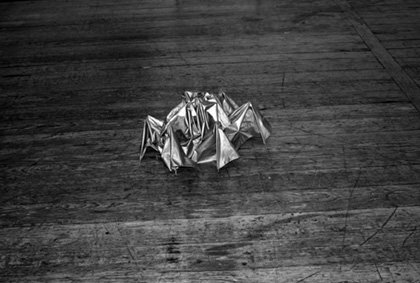 I find lenticular imaging a fascinating medium. Imagery appears unstable behind the lenticular lens and its non-static nature acts like the indecision within Wallace Stevens' poem. I have been captivated with lenticular imagery for a long time. I remember trying to pull apart a lenticular ruler when I was in primary school wanting to know how the magic of it worked.

I have now been working with lenticular imaging techniques over the last 10 years and I am one of a few artists using digital lenticular photography. Lenticular images create an optical three-dimensional effect and/or flow of motion within an image. They are most commonly associated with 3D postcards, greetings cards and novelty items and they are primarily produced by companies who own patents on the specialist production processes. Extending the lenticular medium beyond its novelty usages and associations forms an integral component to my art practice.

I think I am not alone in a fascination with a pull to the unknown - transitions from one kind of reality to another - doorways, paths, ingresses to different places. When I think of the title 'the clearing' I imagine a physical clearing, a gap amongst trees, an unknown or secret space where things might happen. I also think of an emptying of space and the process of becoming clear.

I see these new images in 'the clearing' as hesitant and restrained photographs. With them I want to create a quiet refuge to return to, where feeling and meaning still mean something. I am also interested in slowing down the process of looking - of looking at what's there - and dwelling at length on detail. I'm compelled by momentary sensibilities and the beauty of the object or person that holds the potential for telling a story. Accordingly works with this mindset become imbued with a sense of permanent search which can be likened to indefiniteness and indecision. These visual concerns also correspond with the non-static and elusive qualities of the lenticular medium. The actual blurring, the rendering slightly out-of-focus that the lenticular process achieves serves to imbue the images with an uncanny unreadability.