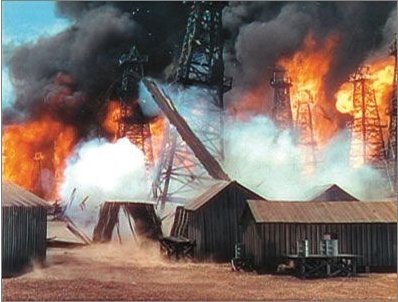 The work of the American artist Jonathan Horowitz (*1966) employs the technique of montage much like a music DJ samples bits and pieces of songs. Scenes from classic movies are combined with obscure bits of media detritus to make critical connections between disparate narratives. The primary structure of Apocalypto Now is taken from a documentary on the history of the Hollywood disaster movie.
Footage from documentaries on climate change and scenes from movies reenacting the 9/11 World Trade Center attack are intercut. Connections are drawn between disaster as entertainment, real life catastrophe, and the apocalyptic beliefs of religious fundamentalists.

The central figure connecting these strands is the actor/director Mel Gibson. As with other players in Apocalypto Now, (self-)destructive impulses are channelled through religion and art. Gibson is not always successful, however, in containing these impulses. The presentation of Apocalypto Now at Museum Ludwig is climate neutral. Solar panels have been installed on the neighboring roof terrace, which looks out onto the Cathedral. The relationship between the sun and the panels is analogous to that of the projector and the screen, and the energy that the projector uses is regained by the solar installation.

Erik van Lieshout
In the Net

The video works by Dutch artist Erik van Lieshout (*1968) are characterised by their directness. Initially he found his inspiration in the hiphop scene, but then moved on increasingly to make videos in which he explores his own identity. While he was working and filming in the Museum Ludwig, he came across Mondrian's painting Tableau I from 1921, the sole painting by the Dutch artist in the museum's collection. Once again van Lieshout was thrown back on his own subjectivity, this time by the encounter with Mondrian's extremely reduced approach to painting. What happens, he asks, when life disappears from art? When the art alone remains?

Both installations were realised under the auspices of Edition Bewegte Bilder – a cooperation between Museum Ludwig and the Rheingold Collection.