Dorian. The artist presents a multi-channel video installation, an adaptation of Oscar Wilde's 19th century novel, The Picture of Dorian Gray. Presented as a non-linear narrative on 4 screens, the work employs the queer undertones of the original novel as a starting point for a feminist reworking of the tale through a new queer identity. 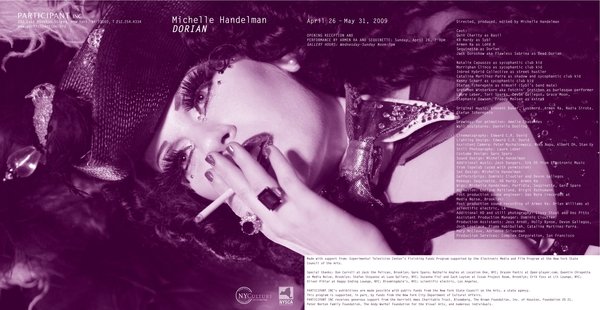 From April 26 through May 31, 2009, PARTICIPANT INC premieres DORIAN, a multi-channel video installation by Michelle Handelman. DORIAN is an adaptation of Oscar Wilde’s 19th century novel, The Picture of Dorian Gray: “It is the spectator, and not life, that art really mirrors.” Presented as a non-linear narrative on four screens, Handelman’s DORIAN employs the queer undertones of the original novel as a starting point for a feminist reworking of the tale through a new queer identity. Told by means of fragmented dialogue and music, each character utilizes their own instrument: Theremin, synthesizer, viola, voice.

Inspired by Wilde’s themes of decadence, beauty, and the meaning of art, Handelman’s Dorian is a young woman discovered by a fashion photographer, then catapulted into a world of high celebrity. Falling under the tutelage of a renowned drag queen, she becomes a downtown nightclub luminary, constantly followed by the paparazzi. Media images become the infamous portrait, grotesquely mutating as she grows more beautiful and famous, culminating in her own narcissistic destruction. Dorian exists as a contemporary superstar, a mirror to our own narcissism--desirable, unknowable, destroyed by vacant ambition. Like films of Warhol and Godard that blur the line between performance and reality, all of20the performers in DORIAN are playing some version of themselves: Wren Kistler aka Sequinette (Dorian) is a gender-bending drag impresario; Armen Ra (Lord H) is a drag queen and renowned Theremin player; Quin Charity (Basil) is a media artist; and K8 Hardy (Sybl Vain) is a performance artist and co-creator of the queer art collective LTTR.

DORIAN is created as a living project that transforms every time it is exhibited. Its premiere at PARTICIPANT INC will be presented as a four-channel experimental narrative. Future incarnations may include a single-channel film with live music and performance; an installation of ambient/abstracted moments representing each character; viral videos of Dorian's portrait released online. Music by Armen Ra, Stefan Tcherepnin, Vincent Baker, Lustmord, and Nadia Sirota. Cinematography by Ed David.

Michelle Handelman lives and works in New York. Her video work has shown worldwide, including the Palm Beach ICA; Georges Pompidou Centre, Paris; ICA London; and SF MOMA. Her performance spectacles have been presented by Performa05, Biennial of Visual Art Performance, NY; Cristinerose Gallery, NY; Exit Art, NY; and The Aldrich Museum of Contemporary Art, CT. She is the director of the 1998 documentary, BloodSisters (Bravo Award), and has collaborated with Monte Cazazza, pioneer of the Industrial Music scene; Eric Werner, co-founder of Survival Research Laboratories; Paul Miller aka DJ Spooky; and media artist Lynn Hershman-Leeson. Handelman has contributed to the cultural antholog ies Apocalypse Culture (Feral House Press) and Inappropriate Behaviour (Serpents Tail), and is an assistant professor in the department of media and performing arts at the Massachusetts College of Art and Design, Boston. She received her M.F.A. at Bard College, and B.F.A. at the SF Art Institute.

Made with support from: Experimental Television Center’s Finishing Funds Program supported by the Electronic Media and Film Program at the New York State Council of the Arts.

PARTICIPANT INC's exhibitions are made possible with public funds from the New York State Council on the Arts, a state agency.

This program is supported, in part, by funds from the New York City Department of Cultural Affairs.