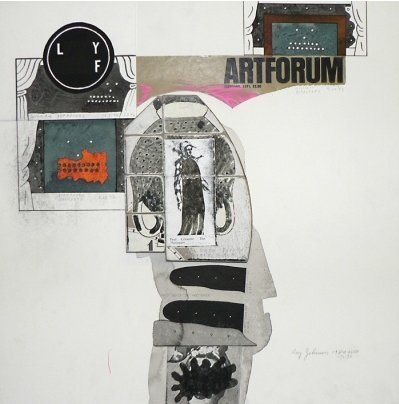 Raven Row's inaugural exhibition is the first large UK show of the collages and mailings of New York artist Ray Johnson (1927–1995). Johnson used radical means to construct and distribute images and his influence on twentieth-century art far exceeds the recognition he receives.

A forerunner of American Pop Art, Johnson appropriated found images of celebrities such as Elvis Presley and James Dean in his work in the mid-fifties. He made art out of social life – both real and imagined – gathering celebrities, the art world, and friends into his work. He inadvertently invented the 'mail art movement', anticipating the digital network.

Ray Johnson's works elude academic classification. Their meticulously arranged surfaces are subverted by spontaneity and randomness, demonstrating the influence of both Albers and Cage, two of his teachers at Black Mountain College. His works can be read as a sequence of tropes and details, a dance of images and text colliding in sometimes hilarious free association.

And Johnson brought others into the dance. He circulated his art amongst a group of friends and those he wanted to see his work, originally as a strategy for exhibiting without a gallery. Johnson created what he described as 'a game of ping pong', often instructing recipients to add to and send on his mailings, either to specific people or back to him. This furthered the indeterminacy of his images, introducing one person to another (or introducing an image to an audience of one through the mailbox) in a way analogous to the meeting of fragments in a collage.

'Ray Johnson. Please Add to & Return' is the largest exhibition yet of Johnson's work in Europe. Significantly, it represents Johnson's mailings – objects he regarded as gifts and thus contrary to the market – equally with the collage works he made for gallery exhibition between 1966 and 1973. Also included are the collages he subjected to a seemingly endless process of reworking and overlaying, which were found signed with multiple dates and neatly arranged in his house at the time of his death.

This exhibition would not have been possible without the generous participation of The Estate of Ray Johnson at Richard L. Feigen & Co., and William S. Wilson.