Everything has a name, or the potential to be named

A group exhibition that focuses on how European colonial powers during the 17th and 18th Centuries appropriated the natural environment in the Americas. In reconsidering this history many of the artists in the exhibition critically re-appropriate these colonial interpretative systems. They do so through research, documentary, film and mapping practices; via text and outdoor interventions; and by using tactics, which are often humorous, to evade or overcome determinism. 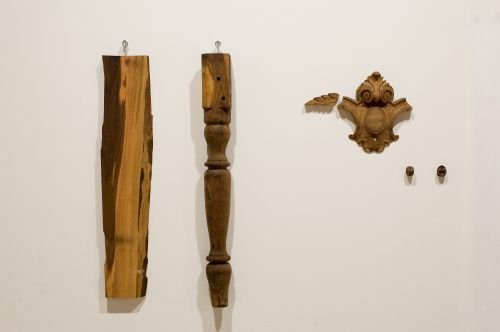 Everything has a name, or the potential to be named* is a group exhibition that focuses on how European colonial powers during the 17th and 18th Centuries appropriated the natural environment in the Americas. The exhibition features works which address how organisms, land and people have been respectively classified, renamed and dislocated by generations of explorers and colonisers, as a consequence of economically and scientifically motivated expeditions by European empires to the Americas. These forms of cultural domination – from the re-naming of a region, to the classification of a medicinal plant – have left lasting legacies, which remain in common use today.

In reconsidering this history many of the artists in the exhibition critically re-appropriate these colonial interpretative systems. By examining the relationship between land, language, botany and colonialism, they reveal the imperialist quest to produce a universal index with which to perceive and tame the other and the ‘unknown’. They do so through research, documentary, film and mapping practices; via text and outdoor interventions; and by using tactics, which are often humorous, to evade or overcome determinism.

To name a few of the works shown in the exhibition:

In his film Muhheakantuck – Everything has a Name, 2003, Matthew Buckingham recounts the expedition led in vain by Henry Hudson in 1609 to find a passage from the Atlantic to the Pacific oceans, and the encounter with Native Americans along the way. The film is a journey above the Hudson River: narrated by the artist, the script drifts from factual information to his personal meditation on colonial processes: “Everything has a name, or the potential to be named, but who does the naming when the unknown is falsely assumed not to exist?”

The Panama Canal is the object of investigation of Luis Camnitzer's installation. The canal is the delayed colonial engineering plan which, three hundred years after Hudson's crusade, enables a direct link between two oceans. Using archival material from newspaper articles, letters and photographs of mostly European origin, Amanaplanacanalpanama, 1995, relates a familiar colonialist narrative of the conquest of a new trade route.

Andrea Geyer's Spiral Lands / Chapter 2, 2008 investigates the ongoing dispossession of lands from Indigenous people, which is one of the longest struggles for social justice in North America. Photographs of previously populated landscapes in the American Southwest accompany an audio lecture which combines voices of native and non-native ethnographers, philosophers, historians and artists, spanning time and geographies.

Alberto Baraya's Herbario de plantas artificiales (Herbarium de Artificial Plants), 2001-present, references 18th and 19th Century botanical expeditions and systems of classification. Borrowing from Carolus Linnaeus' taxonomic procedures, Baraya has created a herbarium of a few hundred specimens of artificial plants of largely Chinese production. Looking for artificial plants in some of the most fertile places on earth, Baraya points to current forms of desire in the consumption, use and ownership of nature. By using the format of the herbarium, Baraya allows for comparisons to be made with colonial approaches to the natural environment.

Anecdotes and non-academic findings further feed the imagination of artists whose works are presented in the exhibition, with humour often remaining one of the most effective strategies to approach centuries old histories whose legacy never cease to mark the present.

* “Everything has a name, or the potential to be named, but who does the naming when the unknown is falsely assumed not to exist?” is extracted from the text of the voice-over of Matthew Buckingham's film Muhheakantuck—Everything Has a Name, 2003.

Four public events will contextualise the works and research generated for the exhibition, while providing a historical backdrop to the period and geographical area covered by the exhibition.

Wednesday 29 April, 5 – 7pm
Jimmie Durham and Andrea Geyer: A Conversation
Venue: Ian Gulland Lecture Hall, Goldsmiths, New Cross, London SE14 6NW
The two artists will be in conversation about their respective artistic engagement with issues of appropriation – of land, language and culture – and of the fabrication of history, resulting from colonialism and capitalist economy.

Tuesday 26 May, 5.15 – 7pm
Seeds of Change, a lecture by Maria Thereza Alves
Venue: Lecture Theatre, Chelsea College of Art & Design, 16 John Islip Street, London SW1P 4JU
The artist will present Seeds of Change, 2005, a project that deals with ‘ballast flora’, an area of botanical study that has been marginalised for bearing direct links with the slave trade.

Thursday 28 May, 7 – 9pm
Natural History and the Appropriation of the New World: Drawing, Assembling and Naming Species – a lecture by Mauricio Nieto
Venue: British Academy, 10 Carlton House Terrace, London SW1Y 5AH
Science historian Mauricio Nieto will talk about his research on the 18th Century Botanical Expeditions to the New World and the ways in which the illustrations that depicted their findings were constructed to legitimise the colonial appropriation of nature in scientific terms.

The events are organised in association with Department of Art, Goldsmiths, as part of Contemporary Art Talks, TrAIN, University of the Arts London, the British Academy and the Embassy of Colombia in the UK.
This exhibition is curated by Anna Colin (Exhibitions Curator, Gasworks) and Catalina Lozano (Residencies Coordinator, Gasworks).

The exhibition and preceding residencies have been made possible with the generous support of:
Catherine Petitgas
Esmée Fairbairn Foundation
The Elephant Trust
Embassy of Colombia in the UK