Aernut Mik - whose work encompasses motion picture, sculpture, architecture, performance, and social commentary - interrogates the nature of reality and subverts the traditional relationship between viewer and viewed. "What Was Good Design?" presents selections from MoMA's design collection that illuminate the primary values of Good Design as promoted (and disputed) by museums, design councils, and department stores. "Polish Posters 1945-89" shows a selection of works from MoMA's collection that typify the striking look and bold spirit of poster design in the Cold War era. "Sensation and Sentiment Redux" includes posters for American, British, German, French, and Italian films dating from 1912 to 1914. 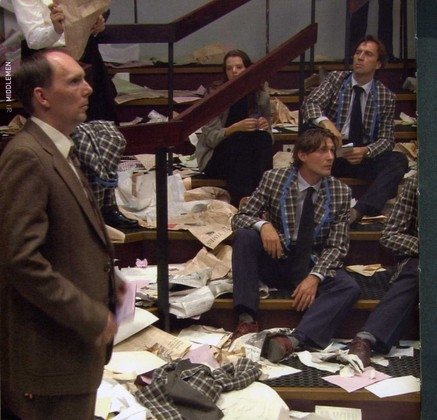 Aernout Mik
Various Locations throughout the Museum
May 5 - July 27, 2009

The Museum of Modern Art presents the exhibition Aernout Mik, the first North American survey of the artist’s work. Mik (Dutch, b. 1962) is distinguished for his ability to combine, shift, and transform artistic practices by creating installations that integrate moving images, sculpture, and architecture into single constructions. Eight of the artist’s works are installed in gallery and non-gallery spaces throughout the Museum, ranging from Mik’s first filmed work Fluff (1996) to Schoolyard (2009), which was commissioned by the Museum for the exhibition. Aernout Mik is organized by Laurence Kardish, Senior Curator, with Kelly Sidley, Curatorial Assistant, Department of Film, The Museum of Modern Art, and is on view from May 6 to July 27, 2009. Silent, looped films are the focus of each installation, which often include a structure specifically built to display Mik’s moving images. In these films the artist implies current societal issues, from economic crises and immigration struggles to parliamentary clashes and outright warfare. Although Mik’s films appear to document actual events, the scenes are often fully staged by the artist, challenging viewers’ systems of belief and interrogating basic cinematic concepts of narrative and realism. As incidents unfold in silence, very little becomes clear. No characters are introduced, no plots develop, and no boundaries are defined, making it difficult to interpret the content and context of each circumstance.

Mr. Kardish states: “Aernout Mik is an artist who exemplifies the fluidity of boundaries. With his moving-image installations, Mik creates a kinesthetic relationship between the installation and viewer, who immediately absorbs the geography of the piece, the curious nature of the structure itself, and the compelling images that occupy the volume Mik has created.” The single-screen floor piece Middlemen (2001) confronts visitors as they enter the main lobby of the Museum from 53rd Street. Approximately 36 feet in length and seven feet tall, the construction inevitably choreographs viewers, both in determining where they stand and how they engage both with other observers of the work and the moving images themselves. In the film component of Middlemen, Mik portrays a stock market floor or commodities exchange peopled with workers who appear to be nervously awaiting something unknown. Capturing the internal anxieties of these “middlemen,” the camera’s movements—long pans mixed with close-up details that jump to wider views of the room—mimic the motions of the bodies and emphasize the jittery atmosphere felt within the space. At the other end of the lobby, the single-channel video installation Osmosis and Excess (2005) hangs near the Museum’s main information desk. The work opposes detailed views of two very different settings: a mega-pharmacy in Tijuana, Mexico, and a car-strewn landscape just outside that city. Although these two scenes appear to be opposites, similar imagery connects them, emphasizing the tangled relationship between consumers and their waste.

The installation Vacuum Room (2005) is on view in the Special Exhibitions Gallery on the second floor. Vacuum Room is a freestanding architectural structure featuring a six-channel film projected onto screens inserted into the walls, creating an interior space scattered with floor pillows and chairs for viewers to sit upon. The work documents an ambiguous conflict among a band of rebels within a legislative or judicial chamber—but as with most of Mik’s works, the exact setting of the film is left unclear. While each channel features moving images from a different stationary camera set within the legislative chamber, the images do not follow a linear sequence. Training Ground (2006), also on display within the same gallery, is a freestanding architectural structure holding a two-channel projection. The film portrays uniformed guards performing field exercises; yet the actions of the film eventually and slowly reverse, with those in power and those submitting to power becoming blurred. The newly commissioned Schoolyard (2009), on view outside the Special Exhibitions Gallery, is a two-channel video installation set at a vocational high school in The Netherlands. After the school has been evacuated for an unspecified reason, groups begin to form outside, including students of various ethnic backgrounds, including Dutch, Turkish, Surinamese, and Moroccan. In turn, various processions arise, with participants either celebrating ecstatically or mourning together, erupting in brief flashes and then just as quickly subsiding. Also on the second floor, the single-channel video installation Scapegoats (2006) comprises a freestanding screen that sits directly on the ground. It is set in an unspecified sports arena, where military operations dominate the entire atmosphere, from combat trucks parked inside the structure to frequent displays of weaponry.

Raw Footage (2006) is on display in the Museum’s Roy and Niuta Titus 1 Theater Lobby Gallery. This two-channel film installation marks a turn for the artist. Instead of devising scenarios and shooting the imagery himself, Mik used materials from newsreels documenting the civil war in Yugoslavia. Mik often pairs related subjects side-by-side, ranging from soldiers loading and firing their guns to visual records of their off-duty hours as they nap and listen to music. This work retains the sound from the original news tapes, and is the only work with audio in the exhibition. Mik’s 1996 single-channel video, Fluff, will be installed on the 6th and 4th floors. It will also be shown 24 hours a day on a monitor visible from the sidewalk near the 11 West 53rd Street film entrance. Shot in super 16mm, Fluff proceeds in a series of stationary shots. As a small cast meanders through what appears to be a warehouse filled with plastic-wrapped furniture and shipping pallets, wads of fluff inexplicably pelt their bodies.

At mid-century, The Museum of Modern Art played a leading role in the definition and dissemination of 'Good Design', a concept that started taking shape in the 1930s and emerged with new relevance and currency in America and Europe in the decades following World War II. What was Good Design? MoMA's Message 1944-56 presents over 100 selections from the Museum's collection—ranging from domestic furnishings and appliances, to textiles, sporting goods, and graphics—to illuminate the primary values of Good Design as promoted by MoMA within an international debate conducted by museums, design councils, and department stores. Iconic pieces by designers including Marcel Breuer, Charles and Ray Eames, Eero Saarinen, and Hans Wegner are shown alongside more unexpected items such as a hunting bow and a plumb bob, as well as everyday objects including an iron, a hamper, a rake, a cheese slicer, and Tupperware.

Though MoMA's voice was resonant, the concept of Good Design extended far beyond Fifty-third Street. From the beginning of mass production in the mid-nineteenth century, thorny questions of design standards and popular taste were raised by design reformers in Europe and America. At mid-century, an international network of authorities-design councils, department stores, and other museums—heightened this debate.

The exhibition is organized by Juliet Kinchin, Curator, and Aidan O'Connor, Curatorial Assistant, Department of Architecture and Design, The Museum of Modern Art.

The exhibition is made possible by Design Onscreen, the Initiative for Architecture and Design on Film, Denver.
Media support provided by Modern Magazine.

The Museum of Modern Art presents Polish Posters 1945–89, an installation drawn from the Museum's collection of 24 posters from the Cold War era of the Polish Poster School, which attracted international attention and admiration. Drawing on a rich Central European tradition in graphic arts, designers like Henryk Tomaszewski, Roman Cieślewicz, Jan Lenica, and Franciszek Starowieyski developed a sophisticated visual language characterized by surreal and expressionist tendencies, a bold use of color, and macabre, often satirical humor.
Polish posters were generally created to promote cultural events—opera, theatre, films and exhibitions. These posters' images frequently contained explicit evocations of violence and sexuality and appeared at a time when there was little or no advertising. The Communist state maintained a strict censorship policy and monopolized the commissioning and distribution of all printed media in that period, yet bureaucratic patrons colluded in turning a blind eye to the oblique but powerful critical commentaries contained in many of the posters.

Early cinema posters are distinguished by their vivid color lithography and astonishing range of oversized formats. This exhibition includes posters—selected from a recent acquisition from the renowned collection of Dutch film distributor Jean Desmet (1875–1956)—for American, British, German, French, and Italian films dating from 1912 to 1914.