One image may hide another 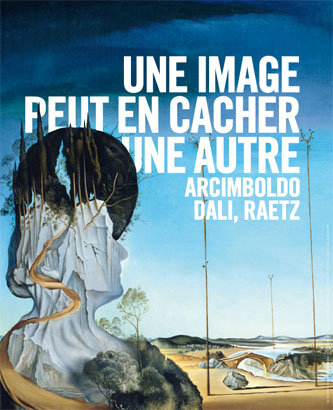 Artists fascinated by optical illusions and keen to explore the limits of painting have long indulged in visual puzzles and changing perspectives. Playing on the ambiguity of double images, which change with the observer’s point of view, many painters have covered their tracks and introduced several meanings, often hidden, in images that can be read in multiple ways. They did so for fun, but also to give their works moral or symbolic meaning, or even religious, political or sexual connotations. Apart from Arcimboldo’s famous composite images or reversible portraits, and the inventions of Dali, the unchallenged grand master of ambiguous imagery, double images have often been dismissed as fortuitous creations, attributed to chance rather than conscious acts and deliberate decisions on the artist’s part. That is why the curators of this exhibition have focused exclusively on double images that have been consciously inserted and claimed by their creators. As the artists are not there to testify, their choice is based on circumstantial historical proof or presumptions. They aim to assemble 250 works, after a rigorous selection process. Surprising echoes and similarities between them will be accentuated by a circuit divided into major themes such as composite images, hidden and reversible images, anthropomorphic landscapes, anamorphoses and perspective illusions, erotic ambiguities and even Rorschach’s ink blot tests.

A special place is given to Dalí, past master in the art of formulating different scenarios, both enigmatic and unpredictable, within the same image. Incidentally, it was under the name of one of Dali’s famous canvases, The Endless Enigma (1938) that a first version of the exhibition was presented in 2003 at the Museum Kunst Palast, Düsseldorf.
For Paris, the concept is the same, but the content of the exhibition has been entirely redesigned and enriched; works from different cultural spheres and periods are now grouped around the canvases of the Catalan master. Their subjects are as much human figuration, illustrated by Arcimboldo’s Seasons, as landscapes, which go as far as Max Ernst, or architecture, introduced by Escher’s impossible perspectives.
Ambiguous images or visual jokes are often found in contemporary art. They are seldom identified because they are not an end in themselves. They do not arise from an ideology but on the contrary are stratagems used in divergent and dissimilar works. The Swiss Markus Raetz’s remarkably inventive volumes lead us into really disturbing double readings of sculpture whereas Arcimboldo and Dalí stayed within the bounds of painting.

Ranging from Michelangelo to Markus Raetz, via Persian miniatures or the popular erotic postcards of the 1900s, the exhibition traces the rich, strange panorama of a practice that is as weird as it is widespread. It focuses our attention on the diversity of the paths taken by artists who played with visual perception, and emphasises the complexity and permanence of this principle of multiple creation.
Double images have long been relegated to a secondary role or brushed off as anecdotal. This exhibition takes the opposing view and concentrates precisely on the fringe images, hidden pictures and multiple meanings which lurk in the greatest works of art. It is a real event, a unique opportunity to take a second look at the works of many artists and discover their unexpected underside.